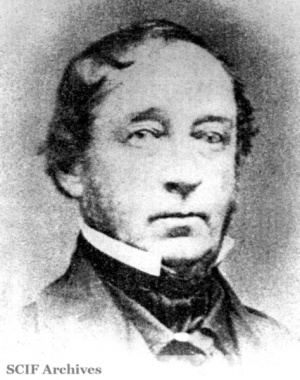 JONES, John Coffin (1796-1861), Boston-born merchant out of Honolulu who made numerous trips to California between 1830 and 1838 with his fleet of vessels:

Jones came to Santa Barbara where he married his second wife, Carlos Carrillo’s daughter, Manuela Antonia (1820-1900), at the Santa Barbara Mission on June 4, 1838. In 1843, Manuela’s father (Carlos Carrillo) and her uncle (José Antonio Carrillo), were granted Santa Rosa Island by Governor Micheltorena. They in turn sold the island to Manuela and Jones, and her sister Francisca and husband, Alpheus Basil Thompson. The sisters paid their father $3,300 for the island, “one half in silver money of good quality and the other half in goods.” Brothers-in-law John C. Jones and Alpheus Basil Thompson thus became partners in Santa Rosa Island. They stocked the island with cattle, sheep and horses in 1843 and 1844, funded by Jones and managed by Thompson with the proceeds to be shared equally. In 1846, Jones and his family moved to Boston, leaving his affairs in the hands of his friend and financial advisor, Alfred Robinson. When Jones found out Thompson had sold a large number of island livestock without sharing the proceeds, he filed a lawsuit against him in 1851. Robinson, along with attorney Charles Fernald, represented Jones in the suit against his brother-in-law A. B. Thompson. Strong opinions divided the Santa Barbara community, and the case was ruled in favor of Jones in Boston. Thompson claimed Jones had “bought” a number of witnesses and appealed. In 1857, Judge S. B. McKee again ruled in favor of Jones, and appointed Abel Stearns as receiver to establish values of livestock, their management costs, cash received and inventory on hand so the financial matter could be settled. In 1859, Santa Barbara cattlemen, the More brothers, bought both Jones’s and Thompson’s remaining interests, consisting of 8000 head of cattle and 2300 sheep. John Coffin Jones died in Boston in 1861. He and his wife Manuela had seven children: