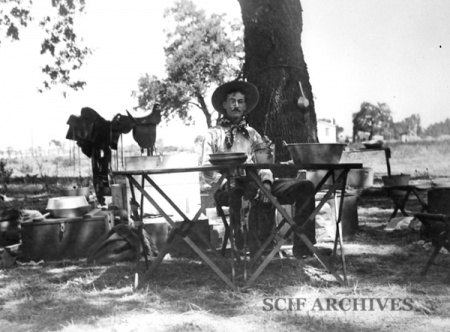 JONES, Philip Mills (1870-1916), archaeologist who did field work on Santa Island from February 17 to April 4, 1901 funded by Phoebe A. Hearst. He was trained as both a medical doctor and an attorney. He traveled to Santa Rosa Island with Captain Burgess aboard Restless. Guillermo “Billy” Guivara was his Mexican field assistant, and John D. Cook joined the expedition in progress. Island employee Santiago [Quintero], accompanied Jones on occasion. Jones' field notes are on file at the University of California at Berkeley.

January 26, 1901 [SBDI]: “San Nicolas Island, about 60 miles off the coast of Santa Barbara, is to be explored by a party of Los Angeles engineers and scientific men and by Professor Philip Jones of the University of California. The party is being sent out by John Suplee of Los Angeles. J. B. Lipincott, a civil engineer, will be at the head of the exploration, accompanied by Homer Hamlin, a geologist. Professor Jones’ share in the examination of the but little known island will be to make an archaeological research and to secure specimens of Indian relics for the university. There are said to be large stores of valuable Indian relics, including implements of the aborigines, pottery, ruins of their abodes, mounds that probably were their playing grounds, skulls and other materials from which the unwritten history of the departed race may be traced. There is evidence that at one time the island was densely populated, but now those people have disappeared. What is the purpose of the visit to the island of other members of the party is not made public. The island is still a public domain. So far as known, it has never been thoroughly explored to learn what are its resources. When Mr. Suplee and Mr. Lippincott were asked for the object of the trip, the answer was that it was purely a pleasure party going to the island to fish and hunt and to take pictures of the Indian ruins. Others who know of the preparations for the trip have a different explanation. It is said that a study of the geological formation of the island will be made, for the purpose of learning if it contains oil. The party will sail from San Pedro Monday morning. Professor Jones has been in Santa Barbara several days. He has visited the Indian ruins in the Santa Ynez mountains, but was unable to find there the relics for which he is searching.”

February 16, 1901 [SBDI]: “Professor Philip M. Jones of the University of California, who with a number of oil experts and geologists of Los Angeles, spent several days on San Nicolas Island and returned last evening. Professor Jones went to the island in the interests of the University of California in search of Indian relics and to make a study of the shell and other deposits. Los Angeles capitalists sent experts over to the island to make a report as to oil indications. None whatever were found. Those who were in the party are A. A. Kendal, Homer Hamlin, United States Geological surveyor, and T. W. Woods of Los Angeles.”

April 3, 1902 [LAT/SCat]: “Philip Mills Jones of the University of California at Berkeley; Homer Hamlin of the United States Geological Survey; and Fred I. Monson, a San Francisco artist, arrived today and will devote some time to a search and study of the relics of the former inhabitants of the island. There explorations of this island [Santa Catalina] will begin tomorrow, when they go to Empire Landing, which appears to have been the Indian’s factory from whence came great quantities of pots, pestles and various other implements, wrought out of the serpentine stone found there. These gentlemen have spent some time already in investigating San Nicolas and other of the Channel Islands, the knowledge thus obtained to be used for the benefit of the State University.”