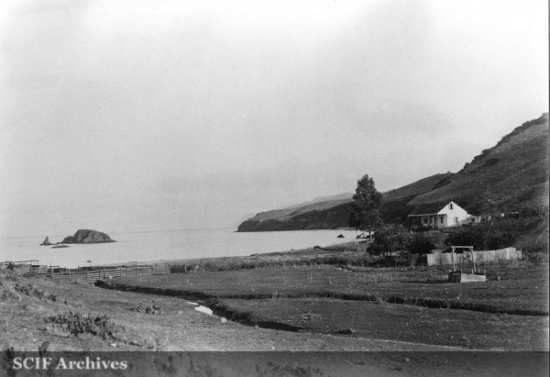 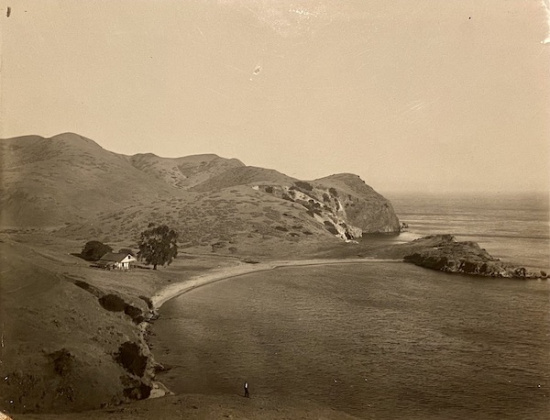 Johnson’s Landing, Santa Catalina Island (Johnson’s Cove), the original name for Emerald Bay, was named for early island resident squatters, brothers John and Charles Johnson. John had moved to the island in about 1853. It was reported in 1863 that John Johnson had 200 head of cattle on the island. John and his brother James Charles were island bachelors. When James Lick acquired all the interests in the island between 1864 and 1867, he evicted squatters. Samuel Prentiss had lived at Johnson’s Landing until his death and burial there in 1856. The older of the Johnson brothers was lost at sea in the wreck of the Laura Bevan in 1858.

JOHNSON'S LANDING: “A broad beach back of which extends a broader valley shallow and open, the site of an ancient Indian village. A large Eucalyptus tree stands in the center of the level and at the east side, near the shore is an extensive glade of Foeniculum resembling a cane-break and a group of very large fig trees. Just over the low ridge at the west of the valley are the SOAPSTONE QUARRY and PARSON'S LANDING. The ascent from Johnson's valley to Soapstone Quarry is very easy, passing over a slope destitute of trees or shrubs.”[Millspaugh & Nuttall. Flora of Santa Catalina Island (1923)].

June 28, 1854 [San Joaquin Republican]: “Depot at Catalina.—The Los Angeles Star states that the Messrs. Johnson have an establishment at Catalina Island, for the purpose of raising vegetables, and also to open a watering place for vessels. They have three wells dug, one 11 feet in diameter, and they represent that there are about 1000 wild goats still on the island.”

May 27, 1858 [DAC]: “Los Angeles, May 24, 1858. Considerable anxiety is felt here to learn the fate of Captain Morton and the schooner Laura Bevan. He sailed from San Pedro a month ago, with freight for San Buenaventura, and ballast, intending to take a cargo of asphalt from Santa Barbara. Since that day there has been no trace of him... The day he sailed there was a heavy northwester, and the sea higher at Catalina than for a long time previously. It is feared he may have been swamped in that gale... There were eleven persons on board, several of whom belonged to the ship, and whose names can be ascertained at the office in San Francisco. One of the brothers Johnson, the oldest, for several years a resident of Catalina Island, was a passenger. There were three other passengers...”

June 2, 1858 [Nevada Democrat]: “Shipwreck and loss of life,—By the steamer Senator the painful intelligence was received of the probable loss of the schooner Laura Bevan, with 11 persons on board, who are all believed to have perished at sea. The vessel sailed from San Pedro more than a month ago, for San Buenaventura with a very small freight. The day after she left, there was a heavy gale, and the schooner has never been heard of since her departure. Subsequently, some hatches, recognized as belonging to the schooner, came ashore at the Malagro Rancho, 40 miles northward of San Pedro; and the steamer Senator, on its passage up, picked up some doors, etc., which are said to have belonged to the Laura Bevan, and brought them to San Francisco. There is little room for doubt, therefore that the schooner swamped, and that all on board perished. The vessel was commanded by Captain Morton, said to have been almost careful and competent seaman. The oldest of the brothers Johnson, for a long time a resident of Catalina Island, was on board, and missing with the others.”

November 26, 1863 [Henry Hancock to Lieut. Col. James F. Curtis]: “Sir: I have the honor to report that at 8 P.M. of the 22nd instant I arrived at Fisherman’s Harbor, Island of Catalina, with two enlisted men of Company C… having sailed from the port of San Pedro on the sloop Ned Beal, burden 17 28/100 tons, owned by Spencer W. Wilson of Wilson’s Harbor, Island of Catalina… The population of the island is about 100, one-half of whom are miners… The present number of sheep is about 15,000, nine thousand of which belong to Mr. Spencer W. Wilson. Of goats there are some 7,000 or 8,000. Of cattle and horses there are not many… John Johnson, ten years a resident, 200 head of cattle… Spencer H. Wilson, five years a resident; 10 head of cattle… Juan Cota, 400 head cattle… Swain Lawson, 10 head cattle…”

June 12, 1864 [DAC]: “Letter from Santa Catalina Island. June 3rd, 1864... Johnson's Harbor, on the eastern part of the Island, is about fifteen miles from the Isthmus. It is a large harbor, and more convenient for shipping than any of those above named, except the Catalina Harbor. Some ten or twelve years ago, Mr. Johnson located here, and established a ranch, which is now so well stocked with sheep and cattle, that he furnishes the government and citizens, from his shop on the Isthmus, with beef and mutton, at from eight to ten cents a pound."

April 8, 1904 [LAT/SCat]: “Avalon. The speedway between the Isthmus and Emerald Bay, or Johnson’s, as it is familiarly known, is completed. The distance between the two points by water is but three miles, but the road as constructed is just a fraction short of seven miles, owing to the sinuosities of the hills and canyons. The road is a model one, having no grade over 2 per cent, and is from thirty to one hundred fifty feet in width. The work required a little over four months to complete, and has cost between $25,000 and $30,000.”

September 8, 1904 [LAT/SCat]: “Avalon. Captain Clark Reeve, of the Emerald, gave a day’s outing with picnic lunch and all accessories to Madam Earhart, manager of the Columbia House yesterday, going to Johnson’s Landing…”

November 17, 1914 [TI/Avalon]: “… At Cherry Canyon, Howland’s, Johnson’s, small summer villages could be operated with success. Good water can be obtained at all these places. It is a logical spot.”

July 31, 1917 [TI/Avalon]: “From the time they left Johnson’s Cove at the west end of the island, to arriving at Avalon Saturday evening, a party of anglers stated that they counted five market fishing launches with nets on board, in District No. 20.”

December 4, 1917 [TI/Avalon]: “A San Pedro boat said to be manned by Austrians, was reported at Johnson’s Cove Friday afternoon.”

March 19, 1918 [TI/Avalon]: “A new boiler has been installed at the Johnson’s Cove power plant near the Isthmus. Captain George N. Cornell transported the boiler from Avalon to the plant.”

March 16, 1940: “Expedition 7. March 16 to 23, 1940, Santa Barbara Island, Santa Barbara County, California. Transportation to and from the island was furnished by the California Fish and Game Commission, the trips being made in the Yellowtail, with Captain E. R. Hyde in command. The field party included M. B. Dunkle, botanist; George P. Kanakoff, invertebrate zoologist; Lloyd Martin, entomologist; Don Meadows, entomologist, and Russ Sprong, cook. Jack Von Bloeker accompanied the party on the outgoing trip, and made a short stop at Johnson’s Harbor, Catalina Island, where a small collection of insects was obtained on March 16…” Comstock, John A. Brief notes on the expeditions conducted between March 16, 1940 and December 14, 1941.