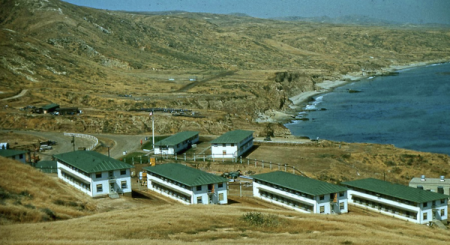 The location is named for William M. Johnson.

From 1951-1963, a large military development consisting of seven two-story barracks, a mess hall, a power house, a pier, three maintenance buildings, seven administrative support buildings, two water tanks, an incinerator, and a number of small sheds dominated the landscape. The U.S. government leased about ten acres for this Air Force Air Control and Warning Station in response to the threat of attacks during the Cold War. It was manned until 1963 with up to 300 personnel, and serviced by the U.S. Navy out of Port Hueneme Naval Base using 85-foot Crash Boats. Fresh water was barged to the location. In 1965 the facility was abandoned, and demolition of the facility was delayed due to asbestos mitigation issues. Vail & Vickers re-purposed building materials from the site for decades. In the early 1990s, the facility was largely torn down by Channel Islands National Park.

July 26, 1987 [SBNP]: “Agencies dispute duty for removing toxins. A feud is brewing between the National Park Service and the Army Corps of Engineers over which agency is responsible for removing hazardous substances discovered at an abandoned military base on Santa Rosa Island. The price tag for removing the asbestos, polychlorinated biphenyls (PCBs), explosives and fuels from the buildings at Johnsons Lee and nearby Soledad Mountain has been roughly set at $1.3 million to $2.3 million. The Park Service, which acquired Santa Rosa in February for $29.5 million, maintains the job should fall to the corps because federal law requires the corps to clean up and remove hazardous substances at abandoned military sites. The corps, however, discovered a clause in a lease agreement between the U.S. Government and the the former owner of the island, Vail and Vickers, which corps representatives said removes them from responsibility. William Ehorn, superintendent of the Channel Islands National Park, said he is frustrated. "They're saying legally they're not required to do it," Ehorn said. "That's moot. The government owns the place now, and it's the government's responsibility to clean it up." Ehorn said the Department of Defense has "a lot more money" than the Park Service for the cleanup work. "They're funded to do these things, the National Park service isn't unless we get a special appropriation from Congress," Ehorn said. In 1949, in response to a Cold War threat of attack by Soviet bombers, about 45 radar stations were built in the United States. Known as Air Control and Warning stations, the facilities were built for the Air Force by the Corps of Engineers. In 1951, a station was constructed on Santa Rosa Island. It included 29 buildings at Johnsons Lee, the only harbor on the south side of the island, and several concrete block structures on nearby Soledad Mountain.To build the Air Force base, the U.S. entered a lease agreement with Vail and Vickers on Dec. 1, 1950. The lease expired Nov. 30, 1965. However the Air Force abandoned the site in 1963, leaving the structures as they were. Over the years, many of the buildings deteriorated due to the weather and vandalism. Vail and Vickers used parts of them for building materials...”