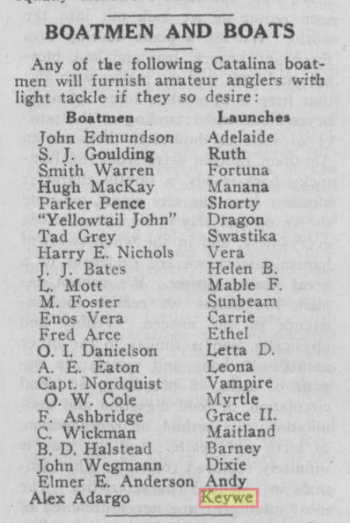 May 30, 1916 [TI/Avalon]: This issue reports the passing of Mrs. Elizabeth Kassar, wife of Captain John Kassar.

April 13, 1927 [TI/Avalon]: “Captain John Kassar, "Yellowtail John," returned home last week after spending a year in searching for the "elixir of life" over on the mainland. The great yellowtail fisherman says that he's "feeling fine." Some day, we are going to write of his adventures, for they say it took our prize yellowtail catcher quite some time before he was able to cook the desert tuna. John has had some interesting experiences during the past year — mud baths, desert hikes, etc. etc.”

October 23, 1927 [LAT]: “Avalon (Catalina Island). — John Kassar, Catalina Island nora-culturist, has discovered the secret of how to grow a blye cyclamen. This simple statement probably means nothing to the thousands of persons who visit Catalina, but when you say that "Yellowtail John," famous Catalina Island fisherman, has a hobby that promises to establish him on the mainland, after twenty-nine years' residence at Avalon. In his experiments with growing things at his home, Swiss Villa, Avalon, he says he has discovered the secret of the blue cyclamen, and he has recently purchased a place on Valley Boulevard, between Sierra Madre and Monrovia, where he will establish flower beds and a market place for his specialty. He expects to dispose of his Avalon home, and move to his new flower farm within a short time. In addition to growing blue cyclamen, Mr. Kassar has evolved a process by which he expects to be able to place blooming Easter lillies on the market at least two weeks in advance of the regular florists.”

June 24, 1944 [LAT]: “"Yellowtail Johnnie", noted fisherman dies. No longer can fishing enthusiasts be virtually assured of yellowtail when they go fishing off Catalina Island. For "Yellowtail Johnnie", whose luck was proverbially consistent with the game fish for a half century, is dead. Although known to sportsmen only as "Yellowtail Johnnie," the fishing devotee's real name was John Kassar. He was 77. He went to Catalina Island when it first began its boom days and started attracting pleasure seekers. He operated a deep-sea fishing boat. A few years ago he left the island to operate an inn at Duarte, but always planned to return to his boat. He died in General Hospital without leaving any immediate family. Funeral services will be conducted at 2 p.m. Tuesday from the Ivy H. Overholtzer, Inc. Chapel.”