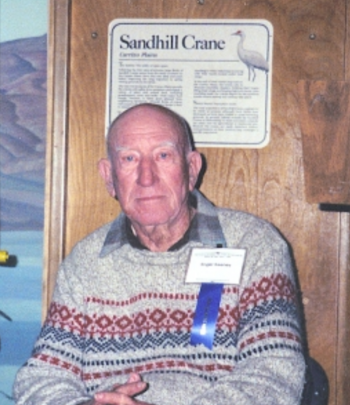 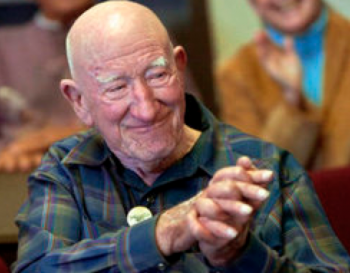 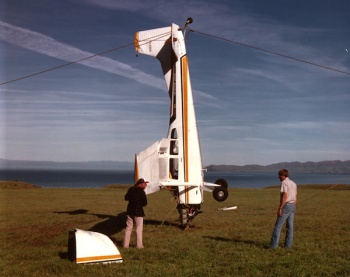 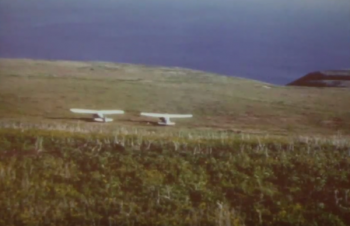 Roger Keeney and a friend landed their planes on Santa Barbara Island.

KEENEY, Charles Roger (1911-2011), legendary fascinating rogue pilot who often flew to various California Channel Islands. Keeney landed on Santa Barbara Island; San Miguel Island; and Santa Rosa Island without permission. He transported San Miguel Island foxes to other islands; he distributed packets of wildflower seeds by his own admission, on several of the islands. He died at age 100. Keeney was married to Freda Mae Reese (1916-1982).

November 6, 1966 [Vail & Vickers records]: “On November 10, 1966 Diego [Cuevas] called from the island. Stated a plane had landed on Island November 6, 1966, apparently as an emergency. Ended up with a broken wing, broken landing gear and bent prop. Place — east end, near Old Ranch and Gull Rock. Plane apparently property of Acme Aircraft Co., Torrance Municipal Airport. Person to contact is a C. R. [Roger] Kenney, phone Davenport 64081, P. O. Box 116, Lomita, California. Plane number N1341N. Navy copter picked up one of the plane's occupants on Sunday night and left the second man with the plane. On Tuesday, November 8, 1966, a plane bearing number N4619A arrived at scene. Occupants removed radio from downed plane, and left a note in or on plane that they would return. Diego stated that no permission to land asked for or given by him to second plane landing. Possible trespass charge: Bill Cotter, DA's office, stated November 10, 1966 that Sect. 602, sub-section L, California Code, forbids entering or occupying any real property or structures without consent.”

October 14, 2011 [The Daily Breeze, Torrance]: The local aviation community will gather Saturday at a memorial service to remember Lomita resident Charles Roger Keeney, honored as one of the nation's oldest pilots four years ago. Keeney, the longest-tenured tenant at Torrance Municipal Airport's Zamperini Field, died Aug. 27 at age 100 from natural causes. "`I've done everything I wanted to do, I've got to 100, now what?' that's what he said," daughter Nancy Cook of Manhattan Beach recalled him saying. "The last thing he wanted to do was get to 100." The service is scheduled for noon in hanger 2719N at the Torrance airport; about 200 people are expected to attend, Cook said. Keeney was born Feb. 15, 1911, at a Cucamonga winery and graduated in 1929 from Lincoln Heights High School in Los Angeles. He started a lifelong love affair with aviation when his father bought him a ride in an airplane as a child. "I couldn't believe anything was that much fun," Keeney told the Daily Breeze in 2007. "From then on, I had one goal in mind: to learn to fly." Indeed, he received his pilot's license after just six hours of flying time. Keeney secured a scholarship to the Western College of Aeronautics by winning a model airplane-making competition. After graduation, he became the chief inspector for Douglas Aircraft Co. In 1945, he founded the Acme Aircraft Co., a firm that modified and built aircraft, including experimental racers, at what was then Advertisement the Lomita Flight Strip and now is Torrance airport. He flew every chance he got, performing loops over Los Angeles Harbor to thrill cruise ship passengers, Cook said. The Federal Aviation Administration in 2007 presented Keeney with the Wright Brothers Master Pilot Award, which honors aviators who have flown for at least 50 consecutive years without incident. Keeney took his final flight a year later on his 97th birthday in his Piper Super Cub. He was predeceased by his wife of 48 years, Freda Mae Keeney. In addition to Cook, he is survived by a son, Roger of Sandy Valley, Nev.; another daughter, Jeannie Hawsey of Evergreen, Colo.; and 14 grandchildren, great-grandchildren and great-great-grandchildren. The family asks that any memorial donations be made to Beach Cities Cadet Squadron No. 107, P.O. Box 3218, Torrance CA 90501.”