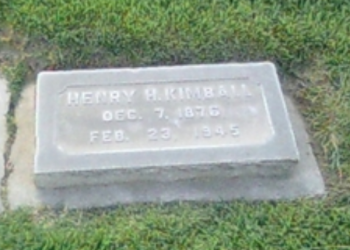 KIMBALL, Henry Hungerford (1876-1945) [#454-220-221] was born in Oakland, California to Henry H. Kimball and Jennie Garnett. He became an ornithological collector and taxidermist who worked in localities primarily in Arizona, New Mexico and Texas. He visited San Clemente, Santa Barbara and Santa Cruz Islands in 1914:

Kimball registered for the World War I Draft Registration on September 12, 1918 when he was 41 and living in Long Beach, California. He listed his occupation as naturalist working for himself; his place of employment as Paradise, Cochise, Arizona; eyes blue and hair brown. Kimball spent the last ten years of his life in Matagorda, Texas, where he died of a cerebral hemorrhage on February 23, 1945 at age 67. His sister, Alice Kimball Meyrs (1873-1950) inherited Kimball’s collection of 15,146 bird skins and numerous sets of eggs, which she sold to Dr. Max Minor Peet in 1945. Dr. Peet donated the Kimball collection to the University of Michigan, Museum of Zoology.

His specimens are found in:

March 1, 1945 [MCT]: “Mr. Henry H. Kimball of Matagorda died in a local hospital Friday. He is survived by one sister, Mrs. Alice Meyers of Fresno, California. Remains were shipped to that city Saturday by Taylor Brothers Funeral Home. Services and burial there will be in charge of Tinkler Mission Chapel.”