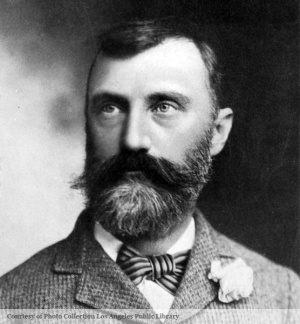 KINNEY, Abbot (1850-1920), publisher who came to California in 1880 and worked for the State Board of Forestry (1884-1887). Kinney wrote a number of books and championed many causes. In 1891 he was a founding member of the Southern California Academy of Sciences, and served a term as its president. Kinney founded Ocean Park in 1894, and Venice Beach in 1904.

As a board member of the Venice Chamber of Commerce, Kinney submitted a bid of $1250 a year for the Santa Barbara Island lease, beginning in 1919. Kinney envisioned developing the island for public use including camping, fishing, and a biological station and aquarium. The Chamber requested a 25 year lease instead of the standard 5 year lease to justify its expenditures, but the request was denied by the government. In 1920, Mr. Kinney failed to pay the lease fee and it was revoked.

June 23, 1889 [LAT]: “Santa Monica. Abbott Kinney, C. F. Holder of Pasadena and Senator Jones spent the morning together…[designing] a proposition to establish here an aquarium here on the scale of those at Brighton, England and Naples, Italy…”

January 11, 1912 [SBMP]: “Through the generous cooperation of the Abbot Kinney Company, a biological station is housed in the aquarium and auditorium buildings at Venice... In the Pacific Ocean, the immediate field of investigation embraces the Channel Islands, extending from San Clemente 80 miles to the south, to San Miguel Island 130 miles to the west...”

September 16, 1919 [SBMP]: “Is Santa Cruz Island destined to become the fairyland of the Pacific? And will this fertile stretch of land, thirty miles across, duplicate every other summer resort on the coast in point of beauty and picturesque grandeur? Has anyone lately been given a five year lease on the island for the purpose of making it another Coney Island? These are questions being asked here since Abbott Kinney, the founder of Venice, has turned his thoughts in this direction, and according to a rumor that seems to be clothed in considerable authority, he is now seeking a 25 year lease on the island domain. It is understood that Mr. Kinney, aroused by the activities of William Wrigley, the chewing gum king who recently purchased Catalina Island, is planning to set up an island annex to the southern California beach resorts, with boats running to Santa Cruz from Santa Barbara and all points south. At any rate, the air is filled with probabilities and as practically every man capable of wearing heels on his brogans has mentally pictured Santa Cruz Island as the logical stomping ground for the world’s tourists, it’s beans to doughnuts that something worth while breaks muy pronto.”