KNOX, Robert W. (1897-1990)[#230-50-6914], Rear Admiral and U.S. Coast and Geodetic Survey whose career spanned 34 years, including 22 years in the field. He was born 6 years before the Wright Brothers first flight, he was a sergeant in the regular Army, and then he was commissioned in the Coast and Geodetic Survey in 1924. Knox was assigned to the Surveyor, then one of the most modern survey vessels in the world. From 1928 to 1941 he spent most of his career in the field. It was during this period he established a number of stations on Santa Rosa, San Miguel and San Nicolas islands. His island survey stations are marked with his initials, RWK. Knox retired in 1957. He died November 1, 1990, and is buried in Arlington National Cemetery: 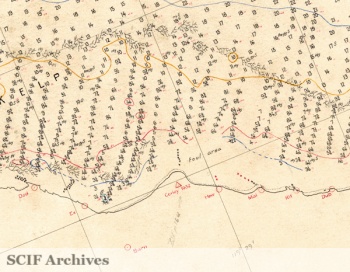 August 15, 1933 [LAT]: “NRA funds were yesterday allocated in San Pedro to the United States Coast and Geodetic Survey for completion of a hydrographic survey of the California coast, and as first project in this area, topographic survey of San Clemente Island was begun under the direction of Lieutenant R. W. Knox. The new appropriation will insure completion of arrested topographic and hydrographic surveys of the eight Channel Islands, from San Clemente north to San Miguel; continuance of the offshore surveys by the steamers Pioneer and Guide; and early publication of a complete new set of navigation charts of the California coast. The survey of San Clemente Island, the first since 1870, will require three months…A similar survey group under Lieutenant C. K. Greene, is at work on the four islands of the northern group: Anacapa, Santa Cruz, Santa Rosa and San Miguel…”

Knox, San Miguel Island, survey station established by Robert W. Knox in 1934. It is located “about 1-1/2 miles due west of Cardwell Point on the outer end of a bluff on the south side of the island. The station is located about 300 meters north of the eastern end of this sand beach.” It was marked with a standard disk stamped KNOX 1934. This triangulation station station appears on the San Miguel Island East topographic map.