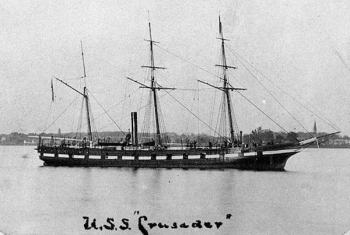 Kalorama during the Civil War as Crusader

Kalorama (#14144) (1858-1876), 169-foot bark-rigged iron passenger steamer built in Murfreesboro, North Carolina as the Chowan with accommodations for forty first and second class passengers and nearly 700 tons of carrying capacity, plus a week’s worth of coal. The U.S. Navy acquired the vessel and decommissioned her but few years later on June 13, 1865. The vessel was named Southern Star and then Crusader before becoming the Kalorama.

The steamer belonged to the Pacific Coast Steamship Company. In 1871, Kalorama took the first known Santa Cruz Island excursions for the people of San Buenaventura. While pulling out from the Ventura wharf on February 25, 1876, a line fouled in her propeller and she drifted helplessly onto the beach and was a total loss. A street running perpendicular to her wreck site at the beach in Ventura, California is named for her.

February 2, 1870 [SFDEB]: “The Kalorama will sail for the islands of Santa Cruz, Santa Rosa and San Nicolas on Friday afternoon at 4 o’clock.”

February 9, 1870 [SFDEB]: “The opposition steamer from San Francisco to Santa Barbara, the Kalorama, is well patronized.”

March 11, 1871 [SBT]: “The steamer Santa Cruz has been placed upon this line in place of the Kalorama, which is laid up for repairs.”

May 5, 1871 [SBT]: “Communication. We are glad to announce that by the energy of the North Pacific Transportation Company, the Opposition Line, and Messrs. Goodall & Nelson, of the steamer Kalorama, our means of communication with San Diego, Los Angeles and San Francisco have been increased to a steamer about every other day from each of the above named places. Each of the steamers plying between this place and San Francisco are good passenger boats, and the accommodations as good as can be obtained on the coast. Those in search of pleasant homes, good lands, lucrative business, or health, could not do better than give us a call. Property is now generally held at a reasonable figure, and our climate for health or pleasure cannot be excelled in any part of the world.”

July 22, 1871 [SBT]: “The steamer Kalorama, Captain [Archie] Harloe, will sail on a picnic excursion from this port on Saturday morning next, July 29th, to Santa Cruz Island and back. Price $1. This is a splendid opportunity for all, families of ladies and children especially, to see the islands and enjoy a most agreeable trip. We have heard of many families who have already secured tickets, which may be had at the store of F. W. Frost & Co.”

July 22, 1871 [SBP]: “Excursion. About a week from this day, probably on Saturday next, the steamer Kalorama, Captain Archie Harlow, will make a picnic excursion to Santa Cruz Island with a pleasure party from Santa Barbara and San Buenaventura…”

August 5, 1871 [SBT]: “The steamer Kalorama, Captain A[rchie] Harloe, started with a large number of passengers on an excursion trip round Santa Cruz Island from Wynema [Hueneme], San Buenaventura and this city, on Wednesday and Thursday last. That the trip was a pleasant one, and that all enjoyed the excursion…”

February 26, 1876 [LAH]: “The steamer Kalorama, belonging to the Goodall, Nelson & Perkins line, has gone ashore at San Buenaventura on her way up from San Diego. She was laden with grain and hogs and carried no passengers. She was forced ashore by by a heavy Southwest gale. The local office does not know the condition of the vessel tonight, but expect to get her off if no heavy blow comes within forty-eight hours. The crew, with assistance from the town, are at work lighting the vessel, and steamers will be dispatched from this port in the morning to give further aid.”

February 27, 1876 [LAH]: “The wrecked Kalorama. The last advices received from San Buenaventura are no more favorable concerning the wreck of the Kalorama. All hopes of saving the unfortunate ship are now given up. The following dispatch was received yesterday by Mr. H. McLellan, Agent of the Goodall, Nelson & Perkins line of steamers in this city. It explains very briefly the manner in which the vessel was wrecked and her present condition: —Came ton to blow. Had to let go lines in a hurry. One got in the propeller and stopped the engines. Hove in a head line. Buoy was hauled to ship. Anchor of buoy did not hold, and brought buoy and moorings hime. Let go anchor. Failed to hold. Drifted into trough of sea and shore. Seventeen feet of water in hold now. Stern-post started and end timbers open. Prospects for saving her slim. Gager, Purser. The Kalorama was a sound ship with a freight capacity of 1,000 tons, and was probably worth from sixty to seventy thousand dollars. She had a partial cargo of grain taken at San Diego, and some 400 hogs shipped at Santa Monica. She had put in a San Buenaventura for an additional lot of hogs. There was probably some insurance on the vessel and nothing on the cargo. The hogs belonged to Mr Farley, of Los Nietos. Captain Elliott, of the Kalorama, has always been considered a careful seaman, and the circumstances of the wreck, as explained in the telegram of Purser Sager, would seem to indicate that the calamity was entirely beyond human intervention. This additional blow will fall heavily upon the Steamship Company, as the Kalorama was one of their most reliable boats, and her destruction dates second in the list of casualties during the last three months.”