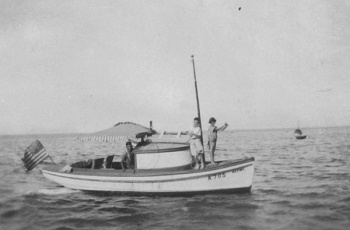 Keywe (# )( -1898) the name of two different vessels, the older one an 85-foot-long sloop used to haul sheep from San Clemente Island; the second a small fishing launch owned by Alex Adargo at Santa Catalina Island.

August 4, 1890 [LAH]: “A party of pleasure seekers have been cruising around Santa Monica bay for the past several days on the yacht Keywe, consisting of Captain Whittley, the owner of the yacht, and wife, Alfred Brown, Miss Emma Rissman, Mr. and Mrs. H. S. Knowles, Miss Fanny Knowles. They left here Saturday morning for San Pedro, where they intend to stop for a couple of days in order to make some repairs, when they will start for a cruise up the coast, intending to return to Catalina, where the captain owns several sheep ranches, in about two weeks.”

August 18, 1890 [LAT]: “The schooner Keywe with Frank P. Whittley and wife and Mr. Fred Brown is cruising around the island.”

September 1, 1890 [LAH]: “Friday the yacht Keywe from Santa Catalina was here and loaded with lumber for the erection of abuilding upon the island.”

September 30, 1896 [LAH]: "The yacht Keywee is on the ways in Catalina Harbor. Captain Al Velberg is in charge."

October 4, 1896 [LAT/SCat]: “The Nellie, Captain Frank Whittley’s yacht, has gone on a cruise to San Nicolas Island, with the following named party: A. B. Chappell, Joe Gautzer, J. C. Meyers, Mr. Faulkner and Captain Whittley who is in command. They go for the purpose of collecting Indian relics. The party will remain about two months, when Captain Whittley will call for them with the schooner Keywee, taking several pack animals along to convey from the interior of the island the relics obtained.”

April 3, 1898 [LAT/SP]: “The sloop Kee Wee, a twenty-ton craft owned by F. K. Whittley and engaged in the traffic between this port and Santa Catalina and San Clemente, capsized this afternoon about a mile off Deadman’s Island. The wind was blowing about forty miles an hour from the west. Gus Knowles and George Johnson, the crew of the sloop, were picked up by a boat from the United States Fish Commission steamship Albatross, which was anchored about a quarter of a mile away. The Kee Wee was returning from San Clemente Island with livestock when she turned turtle.”

April 6, 1898 [LAT/SP] “It is not expected that the sloop Kee Wee, which capsized in a gale and sunk in the channel last Saturday, will be recovered. A search for indications by which to find her location was unsuccessful.”

August 15, 1907 [San Pedro Daily News]: “A. Vignola Drops Dead. A. Vignola, who died at Ocean Park yesterday, was well known in San Pedro, in the early days. "Vig", as he was generally known, owned the sloop Keywe, and was one of the first of the old Pioneer Band, and was interested in sheep raising when Catalina was a pasture ground. He was one of the first to recognize the future possibilities of Avalon, and was laughed at when he predicted that Catalina would be the people's pleasure ground before he died. This was in the late seventies, and it is a pleasure to note that he lived to enjoy the fulfillment of his prophecy. He was one of the first to hold barbecues on the island, and his death will recall many memorable feeds to the minds of ex-Judge Hubbell, Oscar Macy, Dr. Crawford and a score or more of the old timers who enjoyed his hospitality.”

August 19, 1931 [TI/AVALON]: “Captain Pete Marelija, for many years a resident of Avalon, once related a considerable history to the writer [Ernest Windle]. He said: ‘I came to the Island [Catalina] from Santa Barbara on the Santa Cruz Island schooner Keywee. Santa Barbara was then the metropolis of the southwest. In those days we used to regard Santa Cruz Island as we now regard Santa Catalina Island and Los Angeles. If the government had built a breakwater at Santa Barbara instead of San Pedro, the history of Southern California would have been different. The schooner Keywee was 85 feet long, and it made trips between Santa Barbara and Prisoners Harbor at Santa Cruz Island. It was on one of these trips around the Channel Islands that I had my first view of Avalon. This was about 1882. When Shatto bought the island I was operating a small fishing launch named Jupiter. I used to come from Santa Barbara to Avalon, which we then called ‘Timm’s Landing,’ and often would spend several weeks in Avalon Bay during the spring, drying fish on the beach. In those days we used to catch barracuda, yellowtail, sardines, clean them, salt them, dry them, and then pack them in barrels weighing 150 to 200 pounds. We would then take them to Santa Barbara and sell them to the deep-sea ships at from ten to twelve dollars a barrel. I remember one spring when we brought from Santa Cruz Island about twenty barrels of ‘Dago Red,’ and we didn’t leave the Island until all the wine was consumed. Santa Barbara was then the chief port of call for all coast vessels in Southern California. It was thought in those days that Santa Cruz Island would be the pleasure resort of the Pacific Coast, but the owners of that island used to prohibit people from landing on its shores as they do now. Santa Cruz Island in those days was noted for its good wine, cattle and sheep.”

May 23, 1935 [TI/Avalon]: “W. S. Reid Lnads First White Bass. A white sea bass, weighing 42 pounds, was brought to gaff Thursday, May 16th, by Wendell S. Reid of Avalon, while fishing near Long Point from the launch Keywe, Captain Harold Stamford. It was the first of its kind for the 1935 season...”