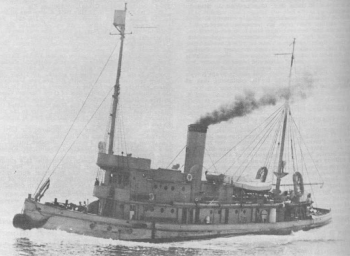 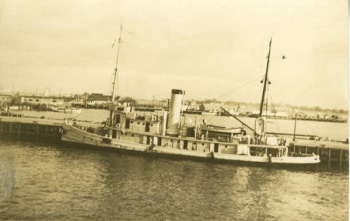 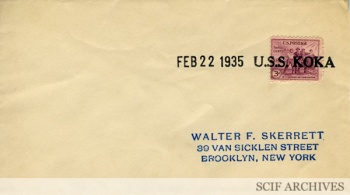 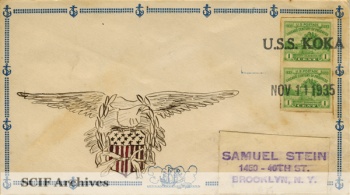 Koka (1919-1937); U.S.S. Koka, 157-foot steel-hulled ocean-going tug built in Puget Sound. She was formerly known as Oconee and Tioga. For 18 years she was stationed out of San Diego, serving as a Navy tug used to tow targets and other duties. On December 7, 1937 Koka, while towing a barge, went aground in a dense fog at the southern end of Northwest Cove. Her navigator mistakenly thought this was the entrance to Wilson Cove. She was decommissioned that same day, and her equipment salvaged. Koka was left to break apart. She was unsalvageable and remained on the rocks for years.

[June 1933 San Clemente Island]: “...As part of their southern California work, it was necessary to establish survey control on San Clemente Island. As both the Coast Guard and Navy were unable to guarantee a return trip from the island, Pierce had to hire a fishing boat to pick up him and his crew when finished on San Clemente. The trip out was made on a Navy tug USS KOKA. The fishing boat charged $50.00 for the 120 mile trip--60 out and 60 back. Prior to getting to San Clemente, it was "an absolute impossibility to obtain any information concerning drinking water on the south end of the island"--consequently "we were forced to take over three 25-gallon barrels of fresh water as part of our equipment.

"The party and equipment was landed on the sandy beach on Smugglers Cove in a whale boat thru a moderate surf. The Navy personnel in returning to the anchored KOKA thru the surf capsized their whale boat, the only casualty being a broken oar.... On this section of the island the time of year we worked here it resembled a desert more than any other type of country. A low cactus, of ball type, made packing difficult as the sharp cactus penetrated the heaviest type of leather boot. There was practically no vegetation other than cactus, and all of the deep ravines and canyons were dry...."“ [Some Notes from Lieutenant Charles Pierce Part 1: The California Coast 1932-1933 in The American Surveyor, August 21, 2016]