LAMB, Chester Converse (1882-1965), Massachusetts-born ornithologist who moved first to Los Angeles in 1896 and then to Berkeley in 1900 where he attended high school and the University of California. Lamb married in 1905 and had two sons. For many years he was connected to the Outdoor Advertising Division of the B. F. Goodrich Rubber Company. In about 1920 he was able to devote all his time to his first interest of birds and mammals. In March 1925 Lamb received an appointment to the staff of the University of California’s Museum of Vertebrate Zoology [MVZ] in Berkeley where he worked until 1932. He started as a field assistant and became Assistant Curator of Mammals.

Lamb visited San Miguel Island September 16-October 5, 1927 collecting both bird and mammal specimens with J. Elton Green. According to Lamb’s field notes, he “engaged Captain Charles Hansen to take us there at the price of $50, and also to bring us back for another $50.” A San Miguel Island fox they collected is at the Museum of Vertebrate Zoology in Washington, D.C. Lamb’s field notes and photographs from this trip are on file at the Museum of Vertebrate Zoology, Berkeley. Dr. Joseph Grinnell named the Rufous-crowned Sparrow, Aimophila ruficeps lambi, in his honor. 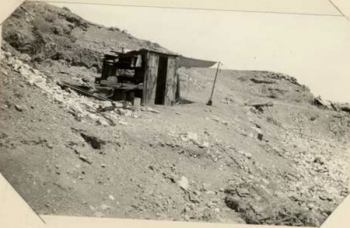 LAMB, Chester Converse “Born at Boston, Massachusetts, January 16, 1883. An active field ornithologist and a member of the Cooper Ornithological Club since 1901, who has conducted extended explorations in Lower California for the Museum of Vertebrate Zoology and has collected comprehensive series of the birds and mammals of the Peninsula. In recognition of his work Dr. Grinnell has recently named in his honor a Rufous-crowned sparrow, Aimophila ruficeps lambi, from Lower California.”

July 7, 1909 “on board the good ship Flyer, somewhere between Santa Barbara and San Nicolas islands, with the following members [Cooper Ornithological Club] present: O. W. Howard, W. B. Judson, A. P. Howard, H. J. Lelande, C. B. Linton, Otto J. Zahn, Antonin Jay, Chester Lamb and Howard Robertson; also the following as visitors: C. A. Caldwell, It. A. Gaylord, H. F. Hossick, Emerson Knight, H. Linton, H. N. Lowe, W. S. McQuilling, Captain Graves, Mate Grannis, and cook Vic… The party left Long Beach on Friday evening, July 2, for a three days’ trip to Santa Barbara and San Nicolas islands. Santa Barbara Island was first visited… Leaving Santa Barbara Island about 3 P.M. the trip was made to San Nicolas Island, reaching the sand spit at the southeast end of the island about 8 P.M. Sunday. July 4 was spent on the island by most of the party, some of whom walked around the island and examined the cormorant rookeries and the Indian burial grounds…” [Condor 12:1 (52)]

Lamb, San Miguel Island, survey station established by Robert W. Knox in 1934. It is located “on Cardwell Point on a flat spot on the easterly end of the bluff along the south side of the island. About 30 feet eastward from the station, the ground slopes sharply downward to the beach. About 75 feet to the westward is a small ravine leading southward towards the beach. The ground in this locality has some short vegetation and is practically free of stones.” It was marked with a standard disk stamped LAMB 1934. This triangulation station appears on the San Miguel Island East topographic map. [UTM 10: North 3,767,815 East 747,767].