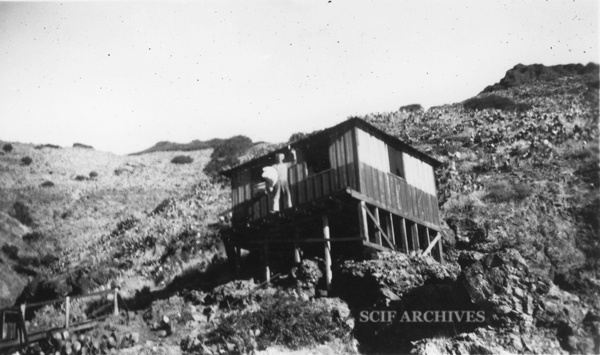 (from Capt. Libbey article, no ref.) ...a new man to help with the barbering of sheep and to round-up the cooking between whiles, who is non other than Shorty, alias “the Pelican”.

September 15, 1917 [SCICo]: “We have made arrangements with Larsen at Blue Bank to pay a rental of $3.50 per month during the crawfish season.”

November 17, 1936: Mr. Larsen of Larco Brothers, gave the Santa Barbara Museum of Natural History a huge brilliantly colored moonfish (Lampris luna) he had taken near Fry’s Harbor on Santa Cruz Island. It is an open-sea species of world-wide distribution in warmer waters.

November 21, 1937 [LAT]: “The lone fisherman of Santa Cruz Island… Here at Fry’s Harbor has lived for many years James ‘Shorty’ Larsen, a lone fisherman, whose only contact with the outside world, except for an occasional Coast Guard boat or an adventure-seeking pleasure yacht, is by means of an ancient crystal radio set. Shorty Larsen’s most prized possession is his old crystal radio set. With it he can get Santa Barbara, and sometimes, when conditions are just right, a little bit of news from farther afield. High on a rocky cliff, safe from the winter seas that sometimes lash the island’s coast, is the Larsen home. He built it himself. Bobby the cat is Shorty Larsen’s lone companion. Bobby is picking out a lobster for supper here. As for Shorty, he eats only a broth made from the lobsters, saying that it is non-fattening, and that he must guard his figure. There is a path to Shorty’s home, but the old rope ladder is the best means of access, particularly when the sea is running high.”