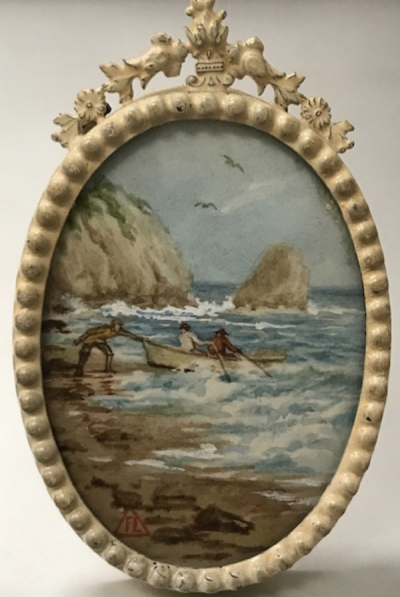 LAUDERBACH, Frances (1867-1960), born in Philadelphia, Pennsylvania on October 18, 1867, she was raised in an artistic milieu since her father ran the Lauderbach Academy of Art in Philadelphia. She moved to southern California in 1886, and by 1900 she had moved to Avalon, Santa Catalina Island, where she became fascinated with painting fishes in the aquarium. She was a friend of Charles Frederic Holder (who lived in Pasadena), and she had a hand in naming a new species of fish for Holder, Starksia holderi. The type specimen is in the USNM #56397.

By 1912, Frances Lauderbach had settled in Pasadena where she further studied at the Stickney Art Institute (1912-1931). She became a part of the Los Angeles art scene during the 1920s and 1930s. For 40 years she taught in the public schools of Los Angeles.

A Quaker, she never married and led a very spartan life with no utilities in her home except for running water. She cooked on a kerosene stove, read by kerosene lamps, and heated her home with a fireplace until her death in Pasadena on January 21, 1960. 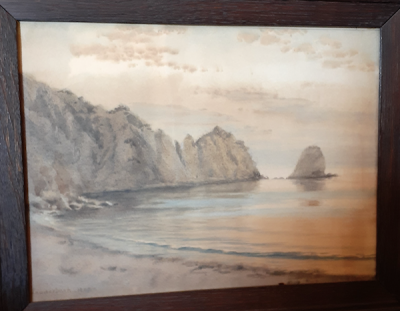 August 26, 1901 [LAT]: “Santa Catalina Brevities. Capt. W. H. Burnham gave an excursion and picnic to a party of friends at the Isthmus Thursday. There were sixteen in the party:...Miss Frances Lauderbach...”

January 16, 1902 [LAT]: “Avalon Club. At the meeting of the Avalon Woman's Club Saturday afternoon, Mrs. Whitney read a chapter of California history dealing with the voyages of Cavendish and other English privateers, and Miss Lauderbach gave an account of Vizcaino's explorations in these waters.”

June 14, 1903 [LAT]: “Miss Frances Lauderbach, a local artist, has been complimented by receiving from Secretary Frank Wiggins, California Commissioner to the St. Louis Exposition, a special request that she enter some of her paintings of Catalina fishes for the exposition, and also at the Los Angeles Chamber of Commerce. Miss Lauderbach's fish studies are very true to nature and have received high commendation.”

June 14, 1903 [LAT]: “Avalon, June 27.—The "season" at this island resort is now well on, and tents and cottages are rapidly filling up with summer visitors. Old faces are becoming quite common on the streets, and there is a liberal sprinkling of new ones...Mrs. William J. Savage gave a reception Wednesday afternoon from 3 to 5 o'clock at the Savage Wigwam on Sumner Avenue, at which Col. and Mrs. C. R. Greenleaf of Columbus, Ohio were guests of honor. Col. Greenleaf, who is a surgeon in the United States army, gave an interesting talk on the Philippines. Those present besides the guests honor, were ...Frances Lauderbach...”

March 26, 1905 [Catherine M. Loud diary]: “Miss Frances Lauderbach gained permission from the Aquarium manager to return at night to paint the Sea Pen after finding it unopened at 5 A. M. and closed like a dried carrot during the day. By night, this Sea Pen bloomed in a golden glory, blazing with a yellow rose pink light. A dark cloth was prepared to observe its strong light. These Sea Pens are dredged in 500 feet of water and found to be a community of cellular life becoming phosphorescent at night. ”