Difference between revisions of "LAUREL, Stan" 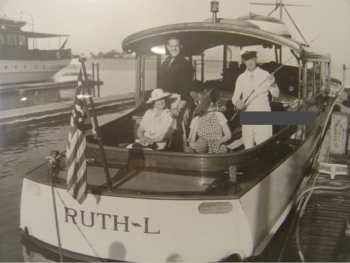 Stan Laurel aboard the original Ida May,
Santa Catalina Island 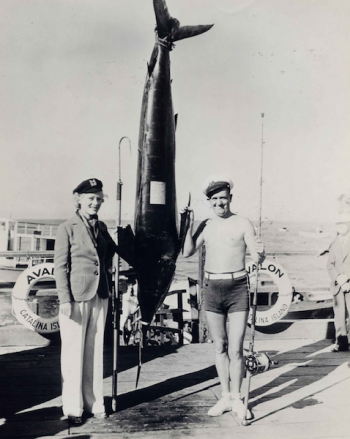 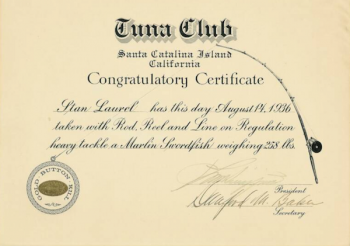 Stan Laurel was a member of the Catalina Island-based Island club and as a one-button recipient. Laurel earned his gold button for catching a 258-pound marlin swordfish per club regulations of rod, reel, line and heavy tackle.

His vessel, Ida May, was originally built in 1926 by Wilmington boat builder, Fellows & Stewart, for Willard Van Brunt, president of the John Deere Company. Van Brunt died in 1935 from shock after falling on the yacht and breaking his hip. The vessel was then purchased by Stan Laurel. (Her most devoted owner, Jonah Jones, was one of the founding fathers of the Long Beach Yacht Club and president of the Tuna Club in 1947. Jones, who owned the yacht for 40 years, was Howard Hughes’s attorney. Hughes fished on board, as did Ernest Hemingway, Mae West, Charlie Chaplin and Joe Kennedy. The pristine yacht was on the market in San Rafael in 2017.)

The silent film, Half a Man, starring Stan Laurel, was filed on Santa Catalina Island.