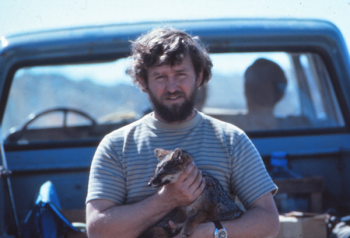 LEATHERWOOD, James Stephen (1943-1997), born October 12, 1943 in Osark, Alabama to insurance executive, Aubrey Leon Leatherwood, and his wife, Lillian Kathleen, a real estate broker. Steve received his B.C. degree in 1966 from California State University, Northridge. He did graduate work at San Diego State University (1969-1976), and in 1994 he received his Ph.D. from Texas A&M University.

Steve was a man of many hats: writer, scientist, educator, marine biologist and researcher, he taught mathematics and English; coached football, soccer and track at a military academy in Miami, Florida in 1967; and then worked at the marine mammal research unit of the U.S. Navy in San Diego, California where he became an administrative officer in San Diego and at Point Mugu (1968-1970). From 1970-1978 Steve worked at Naval Ocean Systems Center, San Diego as a research biologist in the biomedical division; in 1978 he worked with the National Marine Fisheries Service, National Marine Mammal Laboratory, Seattle, WA and was coordinator of the Arctic Whale Research Task in 1978.