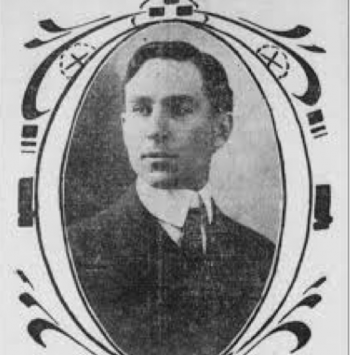 July 7, 1909: “The annual outing meeting of the Southern Division [Cooper Club] on board the good ship Flyer, somewhere between Santa Barbara and San Nicolas islands, with the following members [Cooper Ornithological Club] present: O. W. Howard, W. B. Judson, A. P. Howard, H. J. Lelande, C. B. Linton, Otto J. Zahn, Antonin Jay, Chester Lamb and Howard Robertson; also the following as visitors: C. A. Caldwell, It. A. Gaylord, H. F. Hossick, Emerson Knight, H. Linton… The party left Long Beach on Friday evening, July 2, for a three days’ trip to Santa Barbara and San Nicolas islands. Santa Barbara Island was first visited, the party arriving early Saturday morning, and most of the day was spent on the island where the gull and auklet colonies were examined… Leaving Santa Barbara Island about 3 P.M. the trip was made to San Nicolas Island, reaching the sand spit at the southeast end of the island about 8 P.M. Sunday July 4 was spent on the island by most of the party, some of whom walked around the island and examined the cormorant rookeries and the Indian burial grounds… After a hearty breakfast much enjoyed by all, Mr. Linton and O. W. Howard returned to shore to find Linton’s father who was camping at Northwest Harbor. We expected this would take but a short time, but, as it developed, it took all day, and as the wind again blew as strong as the day before, they were compelled to stay all night on shore. On Tuesday, July 6, after picking up Linton and Howard we started for Northwest Harbor and there found Linton, Sr. and, after taking him aboard, started for Long Beach…” [Condor 12(1):52 January-February 1910].