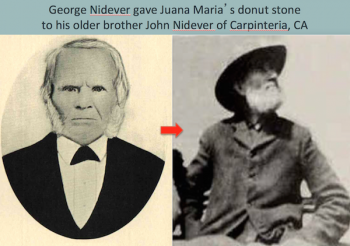 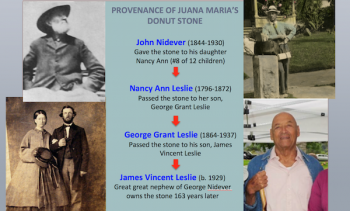 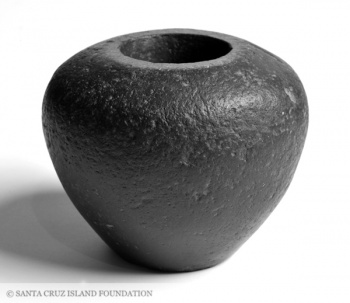 George Frank Leslie and his wife, Nancy Ann, had son, George Grant Leslie (1864-1937), who was only a year old when his father drowned in the Santa Barbara channel in 1865.

George Grant Leslie married Catherine Cagnacci in 1911, and they had three children, the youngest of whom is James Vincent Leslie (b. 1929). Today, a donut stone owned by Juana Maria, the lone woman of San Nicolas Island, has been passed down in this branch of the Nidever family. John Nidever was the older brother of famed otter hunter, George Nidever, who removed Juana Maria, the Lone Woman, from San Nicolas Island in 1853. George Nidever gave his older brother, John, a donut stone that had belonged to Juana Maria. That stone passed down through John Nidever's family through his descendants to James Vincent Leslie.

February 20 1865 [SFDEB]: “A sorrowful event occurred near Santa Barbara a few days ago. Late in the afternoon of Sunday, the 12th of February, George F. Leslie, who was for several years in the employ of Santa Cruz Island, started in an open boat with three men from Santa Barbara for the island, some 20 miles distant. Shortly after he left, it came on to blow very fresh, in consequence of which one of the gentlemen connected with the business on Santa Cruz went down to the beach to order the return of the party, but was too late to signal them. On the day following, Captain Trussel, of the schooner Ana Ellen, coming from the island, was hailed by some object floating about in the channel. After much difficulty he found that the noises proceeded from a Portuguese seaman who was clinging to a boat which had been upset. He immediately, of course, rescued him from his perilous situation, and at that time he was nearly dead from exposure and the violence of the waves. It appears that the remainder of the party after the upsetting of their craft—viz. Mr. Leslie, Porfirio Vasquez and a Portuguese seaman—were washed off the boat to which they had clung, and were drowned; and the survivor only saved his own life with great difficulty till rescued by the good luck of Captain Trussel hearing his voice, which had become piped to a very feeble wail after struggling in the water for 12 or 15 hours. The old sailor is said to have had the fortune to have been twice before rescued from shipwreck. He has been lately engaged with his two lost companions, Vasquez and a brother Portuguese, in salting fish on Santa Cruz and other Channel Islands. The bodies of the three drowned men have not as yet been discovered, ad it is likely many days will elapse before they are found, as the currents off shore are very strong and the accident took place six or seven miles from land. Mr. Leslie was about 27 years of age and had for several years past lived on Santa Cruz. He has left a family. His death is deeply regretted in the town of Santa Barbara, as he was a worthy and excellent young man. He was a native of Lowell, Massachusetts. At the time of his death his wife was waiting his arrival on the island to remove over to the mainland.”