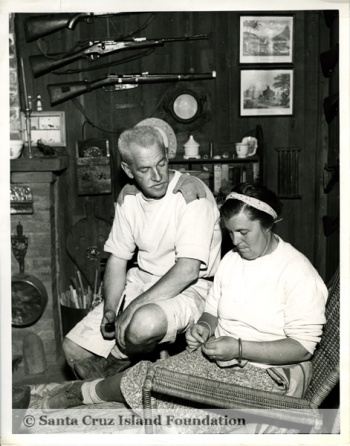 Mr. & Mrs. Herbert S. Lester at “home” on dreary San Miguel Island. Note the “Emperor’s” epaulets. They have been on San Miguel since their marriage in 1928, and although their two young daughters were born on the mainland, the only life they know is that on San Miguel, where the Lester family are the only human inhabitants. 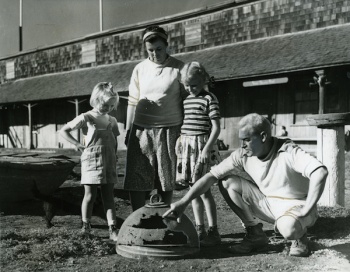 LESTER, Elizabeth neé Sherman (1891-1981), Boston-born wife of Herbert Lester who lived with her family on San Miguel Island from 1930 until June 18, 1942 when her husband committed suicide on the island. Elizabeth Lester and her two daughters moved to Santa Barbara, staying with the Stevens family in Summerland until they could find their own place. She once said their San Miguel Island family was “photographed, eulogized, idolized, beseeched, courted and nearly commercialized according to the caprice of the day.” [Lester 1974: xv].

[1930]: “Ed Vail, of Vail & Vickers—owners of the Vaquero and our neighbor on Santa Rosa Island, brought us, our supplies, our wedding gifts and my personal belongings and set us on our rocky shore. In the months to come, he was our only dependable link with civilization…” [Elizabeth Sherman Lester The Legendary King of San Miguel Island, 1974.]

July 18, 1942 [SBNP]: “On Thursday, Mrs. Hammond entertained Mrs. Herbert Lester of San Miguel Island and her children, Marianne and Betsy, at swimming and luncheon on the beach at her home, Bonnymede.” ]]