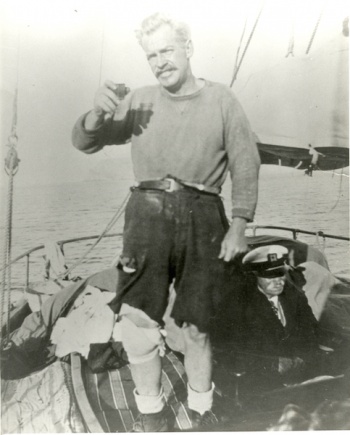 Herbert Lester worked for island lessee, Robert Larkin Brooks, running his island sheep ranch. The two men knew each other from their military years during World War I. Lester claimed himself “King of San Miguel Island,” and for twelve years ruled his island domain. Lester is buried above Harris Point on San Miguel Island. Upon the death of his widow, Elizabeth, she was buried next to him in 1981 (39 years later).

September 28, 1938 [LAT/SB]: “Lonely island folk to honor California discovered today…Family of four… The only residents of lonely San Miguel Island will hold a solemn little service in memory of the doughty explorer [Cabrillo]… These inhabitants are Herbert S. Lester, known as ‘King of San Miguel,’ his wife, Mrs. Elizabeth Sherman Lester, and their small daughters, Betsy and Marianne. They will ring the bell of the world’s smallest schoolhouse.”

December 1941 [Island Kingdom by Al A. Adams in Douglas Airview]: “Lonely San Miguel Island situated in most dangerous wasters in this part Pacific is home for little family… It was years ago that Herbert Lester came to the Pacific Coast. He sought a place to live freely, independently and genuinely. He loved the sea and the true outdoor life and proved he did. He went to San Miguel and became a sheepherder. Lester was pleased with the island and the life it offered. He wrote to his lady in New York and expressed his great feeling toward this island. She came to the coast and Lester crossed the channel in a fish boat to meet her. In Yuma the couple were married. Then they quickly departed to begin a honeymoon on lonely San Miguel in the long house built years before…”

June 23, 1942 [SBNP]: “By Gladwin Hill. A gunshot, whose echoes were soon lost in the chill wind that sweeps constantly across bleak San Miguel Island, has ended the strange saga of America’s modern ‘Swiss Family Robinson.’ The shot, self-inflicted, ended the life of Herbert Lester, the white-haired red-faced New York blue-blood who isolated himself on uninhabited San Miguel 14 years ago and raised his family there. First word of Lester’s death came yesterday after a visit to the island by Coroner E. G. Dodge of Santa Barbara, who pronounced the death a suicide and said Lester was known to have been in failing health, the Associated Press reported.

Mrs. Lester and two daughters, Marianne, 12 and Betsy, 10, returned to the mainland with Dodge. Lester was buried on the lonely island.

A few days ago before he killed himself, I traveled the 40 miles from here across the turbulent Santa Barbara channel in a small motorboat to get what has turned out to be perhaps the last story on the strange adventure. It’s the story of an average man who had the familiar desire to get away from it all’ and set himself up on some kind of an island paradise—and he did.

Lester was a World War I veteran who had been in the machine tool business in New York and Europe. In 1928, tired of Park Avenue ‘cliff dwelling,’ night club smoke, and eating at drugstore counters ‘like a pig in a sty,’ he decided to chuck everything. He arranged with a friend, Robert Brooks, Los Angeles businessman, to live as caretaker on San Miguel, which Brooks leased from the Navy for the grazing of a flock of 1000 sheep. San Miguel is eight miles long and stands 20 miles out from the nearest point of coast. Only grass grows on it, and its sheer 500-foot cliffs make landing hazardous.

The only shelter is a weather-beaten one-story ranch house of a half dozen rooms, side by side, built by a previous caretaker 40 years ago from the wreck of a lumber schooner. The only communication with the mainland was by occasional passing boats. In an emergency, all Lester could do was raise a distress flag and hope somebody would see it.

He lived there alone two years. Then on a furlough back east he met Elizabeth Sherman, who worked in a New York public library and was a member of an old New England family, and asked her to marry him and come to his bleak paradise. ‘And I never regretted it,’ she told me a few days ago. They had two daughters, tow-headed little girls now 11 and 8, who were born in the course of trips ashore to San Francisco [Los Angeles] and brought to the island when they were a few months old. What their life lacked in the niceties of civilization was compensated by the romance of isolation.

The island is too barren even to grow vegetables, and their food had to be brought in batches several times a year by boat or by the planes of Santa Barbara friends who before the war flew over occasionally, landing on a cleared patch of desert land. Their drinking water was salty and they had no refrigeration and had to use margarine instead of butter.

The house was full of island curiosities. Ash trays were Indian pestles centuries old. On the walls were skulls of the big Stellar sea lions which during lulls in the wind could be heard barking on the far shore—the only wild animals on the island except for midget foxes. In the large dining room were a large assortment of green glass globe floats from Japanese fishnets, and a 50-gallon barrel which Lester found in the sand full of 50-year-old bourbon from a 1900 wreck. In the living room, the repository of Lester’s surgical instruments, was the ship’s safe of the S.S. Cuba, wrecked on San Miguel in 1923 with a $1,000,000 cargo of gold and silver, subsequently salvaged.

Lester spent his time gathering firewood, taking weather observations for the Government, and repairing the little pier where the Indian sheep shearers, their only regular visitors, loaded the wool and lambs each March. Their chief diversions were listening to the radio and reading from a large library which ran the gamut from Homer’s Odyssey to Audubon’s America, and which they replenished on their short trips ashore every year. Through newspapers, the radio and lessons from their mother in a little backyard schoolhouse, the little girls kept abreast of juvenile interests and were if anything brighter than average. Marianne read Gone With the Wind in two days.

Now their strange adventure is ended. Mrs. Lester and the girls came ashore with the coroner who went over to investigate Lester’s death. Lester was a soft-spoken, rather shy, but amiable man, seemingly contented in his hermit-like existence. What led him to end his life is as mysterious as the force that impelled him to go to the island originally.

The last thing he said to me as he walked the mile down the steep cliff path from his house and along the beach to where my boat was anchored was, ‘I’d just as soon spend the rest of my life here.’ On the way he pointed to the spot where he had buried two of their dogs that died, and said he would like to be buried on the island when he died.

His wish has been carried out.”

Lester Point, San Miguel Island, a northwest facing point to the south of Secret Cove and Harris Point at the east end of Simonton Cove.