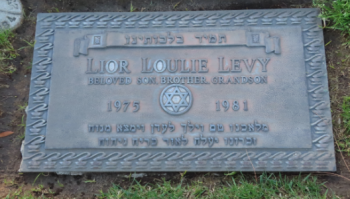 LEVY, Lior Louie (1975-1981) was killed in the helicopter crash of a Catalina Airlines Sikorsky off Pebbly Beach on February 22, 1981. He was five years old. Levy is buried in Mount Sinai Memorial Park, Los Angeles. Miguel Ortega, 24, was also killed.

According to the Aviation Safety Network accident report, the main rotor failed due to "fatigue failure."

February 23, 1981 [LAT]: “ 2 killed in crash of Catalina copter. A Catalina Airlines helicopter crashed in the ocean off Santa Catalina Island Sunday , killing a young boy and a man on his honeymoon and injuring six other people, including the pilot. A Coast Guard spokesman said the helicopter, a Sikorsky S-62A amphibious transport, had just completed its 15-minute flight from San Pedro and was landing at Pebbly Beach near Avalon when the crash occurred. Los Angeles County lifeguard Lt. Steve Wagner said the lifeguard boat Baywatch Avalon found the pilot, two women a man and two boys clinging to the partly submerged fuselage minutes after the crash. Two others, a man and a boy, were trapped inside and it sank about 300 yards from shore—in 200 feet of water, he said. Efforts by divers were unsuccessful and were finally abandoned die to darkness. A spokeswoman for Catalina Airlines said "At this time, there is no comment to be made" about the crash. It was the airline's fourth fatal crash in less than four years.

The dead were identified as Miguel Ortega, 24, of Maywood, whose bride of two days, Gloria, 18, survived, and Lior Levy, 5, whose parents and two brothers also survived. The survivors were taken to Avalon Municipal Hospital where pilot Walter Pinkerton, 32, of Manhattan Beach, was in serious condition with chest and neck injuries. A Coast Guard helicopter took him to Torrence Medical Center, where he was later reported in stable condition. Others remain in Avalon. A hospital spokesman said 11-year-old Joseph Levy, brother of the dead boy, was in serious condition with a compound fracture of his right leg. The spokeswoman said the boys' parents, Maurice Levy, 42, and Clara Levy, 30, and older brother Meir, 14, were in good condition as was Mrs. Ortega. All were treated for cuts, bruises, exposure and shock. Cause of the crash was not immediately known. The National Transportation Safety Board has ordered an investigation.

Divers had tried to locate the fuselage, to recover the bodies and to secure the wreckage before it could be moved to an inaccessible spot. A spokesman for the harbor master's office at Avalon explained that the sea bed slopes sharply in the crash area, and objects on the bottom tend to be moved seaward by gravity and waves. An NTSB spokesman said it was hoped that the wreckage might be recovered. Leo Moran, 38, owner of Avalon Taxi Co., saw the crash from Pebbly Beach. "It (the helicopter) was making a normal approach," he said, "about a half mile out when it started swirling, making a large semi-circle. "When it was halfway finished with this circle, it turned on its side and dropped about 100 feet—not very fast. It came down on about a 45-degree angle and hit the water. It stayed afloat for several minutes...and then it started sinking. There was this one section of the cockpit that was sticking up."

At the hospital in Avalon, Maurice Levy's memories of the crash were more personal. With his wife and sons, he had been en route to a two or three hour outing in Avalon. It was the family's first visit to Santa Catalina Island. "We were just flying," he said. "Suddenly we heard something crack. And then there was another noise...the plane was losing height and moving to the right, turning right and spinning and then we hit the water. It was so sudden." Levy and his wife and children had been in the rear seats. His next memory confused; the aircraft was upside down. "Everyone wants out," he said. "I found this opening A window, I think. I went out...then I saw my son—my youngest son was missing. "I went into the helicopter again, searching for my little boy. "But I couldn't imagine. I couldn't find him. I couldn't see anything inside there. Overcome by the memory, he burst into tears. "My back hurts," he said when he had partly recovered his composure. "It hurts very much. But that's not important. My son is gone. I don't want to be alive. Lifeguard Wagner said the first report came at 2:21 by marine radio from a private yacht. The fuselage was almost gone by the time the survivors had been picked up. "It was upside down," he said "and it was taking on water very fast. Too fast for us to get inside and help anyone. There was just no chance at all."

Don Cook, who works for Catalina Airlines at Pebbly Beach, was off duty Sunday. But he lives nearby and he said he said his attention was attracted when the approaching helicopter began making "an odd sound." "The r.p.m.s (revolutions per minute of the main helicopter wing) went way higher than they should have been. There was a high whining, and I knew it wasn't right. "I looked out toward the beach—and I could see the ship in the air. I saw something fall off. I thought it was a blade." Then, he said, the helicopter dropped from sight. A moment later, he heard the crash. Many others saw the crash. Several reported seeing an object fall into the water from the helicopter just before it tilted toward the water.

Danny Croskery, a visitor to the island, said, "I was waiting to get on the helicopter," he said. "I was going back to the mainland. I saw this one coming in. It looked like he was coming in for a landing. "Then he tried to make a real tight U-turn, and then he lost control." Joseph Chon, of Woodland Hills, who had just arrived on another Catalina Airlines helicopter, said, "I heard the noise in the sky and it sounded funny," he said. "I turned around, and there was this big Sikorsky—and something came off on it. It looked like the tail rotor to me, but I could be wrong. It was so fast—and yet so slow. "It was like it crashed in slow motion. But even so, it was all too fast for me to take in. I couldn't believe it. I still can't. I'm going home on a boat. Any boat."

Catalina Airlines, which operates both helicopter and fixed-wing craft between the mainland and the island, has had a number of fatalities in recent years. In 1977, three of its older fixed-wing aircraft were grounded for a time when their frames were found to have suffered corrosion damage. A 1978 helicopter crash in San Pedro Bay injured three people, one of whom subsequently died of injuries. In 1979, an April 14 crash involving one of the fixed-wing craft killed one elderly woman and injured 10 other people. Five months later, a second crash of one of the firm's fixed-wing craft cost the life of a male passenger and injured three other people.”