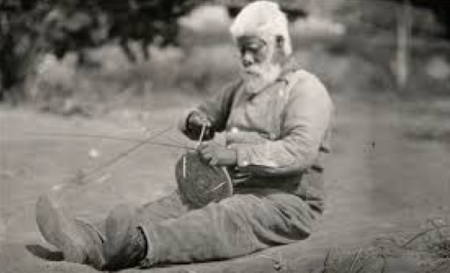 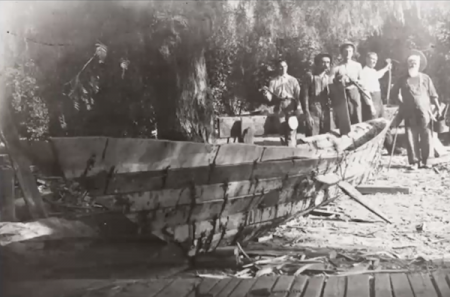 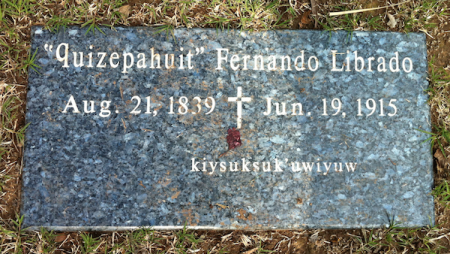 LIBRADO, Fernando (1839-1915) was born at Mission San Buenaventura on August 20, 1839 and baptized the following day, being christened “Bernardo.” Although his age at the time of his death is often listed as over 100, he died at Cottage Hospital on June 19, 1915 at age 76. He is buried in Santa Barbara at Calvary Cemetery (#1473). Both of Fernando's parents, Mamerto and Juana Alfonsa, were born on Santa Cruz Island.

Trail to Fernando by John Johnson

September 5, 1911 [SBI]: “County to aid Indian 120 years old. Helped to tile roof of Purisima Mission 99 years ago. The Board of Supervisors this morning granted county aid in the amount of $12 a month to Fernando Librado, who is believed to be the oldest man in this section of the county. Librado is an Indian and lives at Las Cruces. His exact age is uncertain, but it is believed to be in excess of 120 years old. He was born on Santa Cruz Island and is a member of the tribe known as ‘Mum’ Indians. He was well-educated by the priests and is highly intelligent…”

June 22, 1915 [SBMP]: “Last of Island Indians passes to his fathers. Fernando Librado, 110 years old, helped build Santa Ynez Mission. Fernando Librado, who for many years has been the last of the Santa Barbara Channel Islands Indians, has passed away at the County Hospital. This funeral will be held at the Parochial Church this morning and the interment will be at Calvary Cemetery. Librado was reputed to be about 110 years old and that does not seem improbable. As a boy, he was brought to the mainland and given his earliest education by the fathers at the Ventura Mission, and they gave him the name he bore. Librado frequently told of having assisted in the building of the Santa Ynez Mission. That was founded in 1814, but not completed until some years later. His story was that he distinctly remembered carrying up the tiles to the roof. Librado was very well educated and could read four different languages. He was so well preserved that even a couple of years ago he frequently would read the daily papers without the use of glasses. Most of his latter years were passed at La Cruces, and he had only been in the hospital two weeks. His failing was entirely due to old age, as he had never suffered serious illness.”

June 22, 1915 [LAT]: “Fernando Librado, the last of the Santa Barbara Channel Indians, died at the County Hospital here today. He was said to be 110 years old. Librado was educated by the early mission fathers at Ventura and could speak four languages. The approximate correctness of his age is attested by his account of having assisted as a boy to build the Santa Ynez Mission, which was founded in 1814 and completed some years later.”