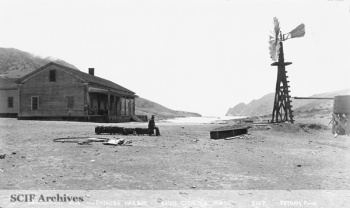 LICK, James (1796-1876), Pennsylvania-born carpenter’s son who became a piano builder, manufacturer, land baron, and philanthropist to the sciences. Lick arrived in San Francisco, California in 1848 where he began buying real estate. The subsequent gold rush created a housing boom and made Lick a very wealthy man.

Lick began buying interest in Santa Catalina Island in 1864, and by 1867 had managed to merge the ownership back to one person. He first paid $4,150 for an undivided share, soon thereafter buying the remaining undivided interests, for a total of $23,000.

By the time he had acquired ownership, various ranchers and stock raisers had moved onto the island and claimed squatters’ rights, including: H. Boushey, Juan Cota, D. B. S. Diltz, M. W. Grady, Thomas Gallagher, Francisco Guerrera, William Howland, bachelor brothers John L. and Charles Johnson, Swain [Sven/Swayne] Lawson, Thomas O’Hara, William Walker, Benjamin Weston, Spencer Wilson, Thomas Whittley, and several others. Lick evicted the squatters, and in 1874, two years before his death, Lick created a three million dollar trust with trustees taking title to Santa Catalina Island. Lick’s illegitimate son contested the trust, and on August 11, 1887 new trustees sold the island to George Shatto for $200,000. The Lick years span from 1867 to 1887 on Santa Catalina Island. At the time of his death, he was the wealthiest man in California. Both Lick Crater on the moon and the 1951 asteroid Lick are named in his honor.

July 6, 1872 [SBT]: “Sale of Catalina Island. The largest land sale ever effected in this county was made on the 19th of this month, as appears from the records at the County Clerk’s office. The property disposed of in the indenture, which is an agreement to convey within twelve months from its date on payment of the consideration, embraces the whole of Catalina Island, opposite San Pedro bay. The consideration for which Mr. James Lick, of Santa Clara, has agreed to convey this island is $1,250,000—the largest sum ever paid for any piece of property within this county. Governor John G. Downey, Don John Foster, and Mr. Max Strobel are the purchasers. The island is now used for grazing, affording a fine pasturage for thousands of sheep. The prospective value of the island consists of its undeveloped mineral deposits, among which there are numerous veins of argentiferous galena of great richness. It also contains some of the most valuable deposits of copper ore on this coast. All these mineral deposits will sooner or later be worked, enriching the adventurous and benefiting the entire country.— Los Angeles News, 30th ult.”

November 18, 1873 [LAH]: “Santa Catalina Island, a part of Los Angeles County, about twenty-five miles from the mainland, contains 47,320 acres and is the property of James Lick of San Jose. It is valued at upwards of a million dollars, and has been bonded to Peter Donahue, Don Juan Foster, John G. Downey and others, for the purpose of a sale in Europe.“

February 5, 1894 [LAH]: “The island of Santa Catalina, off Los Angeles, embraces an area of some 46,000 acres, was bonded to Ex-Governor Downey, and others, who tried to negotiate a sale to an English company, the price asked being $1,250,000. The sale, however, fell through, and it is still the property of James Lick of San Francisco, Governor Downey, of this city, being the agent. The island is devoted to sheep raising, and also has mines of copper and silver. The breed of sheep on this island are Spanish Merino and its grades, and there are vast flocks of them.“

November 28, 1874 [NYT]: “James Lick’s estate. The greater portion sold for nearly two million dollars. The greater part of the real estate of James Lick, deeded for the benefit of the people of California to T. H. Selby and others, Trustees, was sold yesterday for the aggregate amount of $1,999,385… Santa Catalina Island, containing 45,000 acres, was withheld because important discoveries of mineral wealth are expected or hoped for there soon…”

December 23, 1874 [LAH]: “The most valuable piece of property belonging to the Lick estate is the island of Santa Catalina, situated off the coast of Alta California about twenty miles from the mainland, opposite the harbor of Wilmington. Its value is variously estimated at from $1,000,000 to $3,000,000. It is about twenty-seven miles long, eight miles wide in its widest part, from which it tapers gradually north and south to a point, and contains 45,820 acres. At the time of the sale to the Lick estate the island was reserved. The reason assigned was that such developments of the mineral resources of the island were being made as to warrant the expectation that in a few months it could be sold for a much larger sum than at present. The announcement was mildly deceptive. It is about three years since any prospecting was done on the island, and none is in contemplation at present by those having control of the property. The Trustees feeling certain that the value of the island will greatly enhance in a few years, and that it could not now be sold for an approximation of value, decided to hold it for a year or two more unless an advantageous offer at private sale is made in the meantime. In April 1872, Mr. Lick employed William C. Bennett, a pioneer and an experienced miner, now residing at Gilroy, to visit the island and examine the leads discovered thereon, with a view to determining their character and prospective value. As there has since his visit been no attempt the mineral resources of the island or discover new ones, his account of what he saw and the conclusions he drew therefrom apply to the island now as well as at the time of the visit. Proceeding to Los Angeles by steamer, he there procured a small boat and ran out to the island, making the landing without difficulty.

The surface of the island is hilly, and the main range which extends from north to south, shields the bay on the east side of the island from the prevailing winds, which blow from the southwest. The water is deep, the shore precipitous, the surface calm and the largest ships can ride in safety in the harbor, On the west side of the island is another deep, land-locked harbor, capable of accommodating about half a dozen large ships. The southern portion of the island is covered with brush and scrub oak, while the northern part is more open. The soil is adobe, interspersed with a kind of sand formed by the slackening of the limestone, which forms the principal element of the geological formation of the island. It is unfit for cultivation, but wild goats grow in profusion and afford pasture for from 10,000 to 20,000 head of sheep every year. The only buildings upon it are a two-story frame house, said to have been erected as a barrack for a company of United States troops stationed there for some time during the rebellion, and the cottages of the sheep owners and their herdsmen. The climate corresponds to that of Los Angeles. Fish are abundant in the harbors, but there is no game on the island worth mentioning...“

August 19, 1886 [LAT/SCat]: “Santa Catalina Island, An enthusiastic Angeleños count of the resort… A German who seems to have taken up his retreat there, replied: ‘vell dere ish seven or eight thousasnd vild goats und about twenty wild cows, und ofer fifty vild jackasses’…in addition can be mentioned twenty thousand sheep, the property of Howland, Whittley & Co., who rent the island from the Lick estate…”

July 19, 1887 [DDR]: “An Island purchased. Santa Catalina Island which lies off Point San Pedro, about forty-five miles north of Los Angeles, has been sold to an Eastern syndicate, whose names are withheld, for $200,000. The island is a part of the Lick estate…The syndicate proposes making Santa Catalina one of the greatest health resorts of the world, and will erect thereon a hotel of magnificent dimensions and unsurpassed accommodations. The island is particularly adapted for the purpose contemplated.”

November 24, 1888 [WP]: “A place of interest to visitors who go to Southern California is Santa Catalina Island, which is in the Pacific, twenty miles off the coast of Los Angeles County. It was once owned by James Lick, of Lick Observatory fame, and was left as part of his estate. It was recently sold for $500,000. A few goats were left on it by some shipwrecked sailors, and these have multiplied to thousands which now run wild in the mountains. The original inhabitants of the island are entirely extinct.”

January 20, 1892 [SBMP]: “Catalina Island sold to Banning brother of Los Angeles. To be made into a resort. Banning brothers have purchased Catalina Island from George R. Shatto. The new owners will make it a grand summer resort. An English syndicate which once purchased it failed to meet their obligation. Price to the syndicate was $400,000. The amount paid by Banning brothers is not stated. Shatto bought the island from the Lick estate four years ago and for over $150,000.”

March 17, 1894 [PTO]: “Coveted islands…It is said that James Lick once laid claim to Santa Catalina Island, and that for a long time he had a large band of sheep there.”

August 20, 1899 [CT]: “Santa Catalina Island a private kingdom…Bought by James Lick… Lick hoped, it is generally believed, that there might be deposits of minerals in the mountains…He found the island inhabited by squatters, who had been drawn from the mainland by the charm of the equable climate… Lick made short work of them… All that Lick did for the island was to ship to it several cargoes of goats and turn them loose to scramble for a living. Their descendants are furnishing sport for the hunter today…”