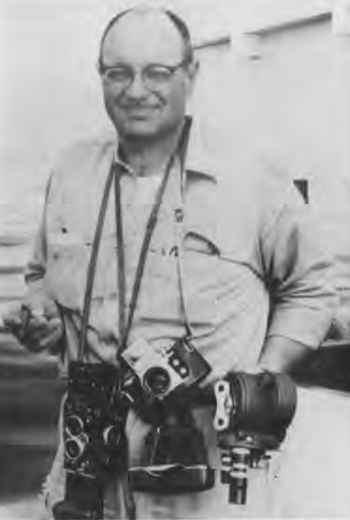 LINDSAY, George Edmund (1916-2002), was born in Pomona, California on August 17, 1916, to orchardists Alice H. Foster and Charles W. Lindsay. He attended Chaffey Junior College (in Ontario, California) and San Diego State College before finishing his undergraduate degree at Stanford University in 1950. He continued graduate studies at Stanford, studying with Ira L. Wiggins, completing his dissertation on the taxonomy and ecology of the cactus genus Ferocactus in 1955.

Lindsay specialized in desert plants, with field work in Mexico and the western United States. In 1940, he was executive director of the Desert Botanical Garden in Phoenix, Arizona. In 1956, Lindsay became director of the San Diego Natural History Museum, leading research expeditions throughout his tenure, particularly to the Baja peninsula. He became director of the California Academy of Sciences in 1963.