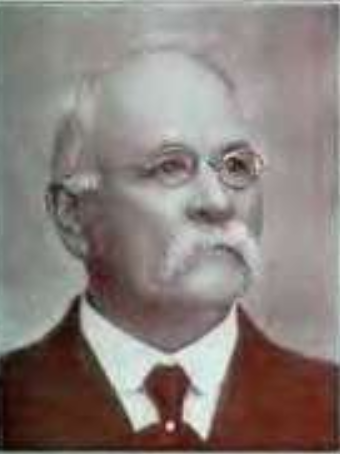 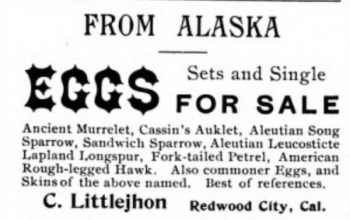 LITTLEJOHN, Chase (1853-1943) grew up in Redwood City, one of five children of William and Emma Doyle Littlejohn. At an early age, Littlejohn started collecting birds and eggs. In 1926 Stanford University's Natural History Museum bought his collection. Some of his mounted birds were species that had gone extinct. Littlejohn was a close friend and mentor to Dudley DeGroot.

In the 1880 census his occupation is listed as “otter hunter”; he hunted in Alaska around the Aleutian Islands. Of the Black Oystercatcher, he once noted: Their warning cry at the approach of man if heard by the sea otter causes the latter to make off at once, for this reason they are much hated by otter hunters.”

Littlejohn had no children.

In 1894 Littlejohn traveled to the Alaskan Peninsula for the Smithsonian Institution where he climbed the cliffs to collect birds, eggs and nests. His wife died at age 40 in 1897. The following year he was enlisted by fellow ornithologist, Alfred Webster Anthony, naturalist at the San Diego Natural History Museum, to go on a year-long expedition to the South Pacific. By 1920 Littlejohn was assistant curator in the Department of Ornithology and Mammalogy at the California Academy of Sciences.