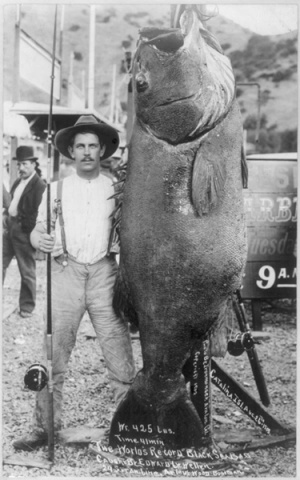 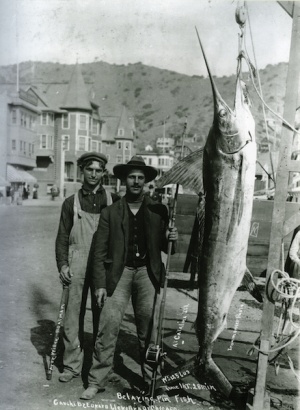 Edward Beach Llewellyn and his swordfish.
Photo by Ironmonger 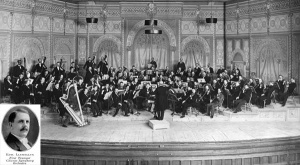 LLEWELLYN, Edward Beach (1879-1936), was born in St. Louis, Missouri on September 25, 1879. Son of a trumpeter, Llewellyn became a well-known American trumpeter, coronetist and composer. In 1890, Edward began to study the cornet with his father. He also studied piano, violin, and harmony at Chicago Music College. In 1893, father and son played in the orchestra of the Chicago World's Columbian Exposition Fair. Edward Llewellyn also played in the Chicago Marine Band 1895-1899, later becoming solo trumpet in the band from 1900-1904. He played, again with his father, at the Pan-American Exposition, Buffalo, New York in 1901.

Llewellyn was also a gifted sportsman, wrestler and golfer. In 1907 and 1908 he was the U.S. national champion cyclist. Llewelyn was the principal trumpet player with the Chicago Symphony for 22 years. At the time of his accidental death in Texas, he was personnel manager of the Chicago Symphony.