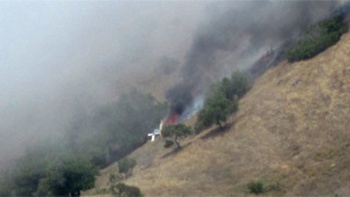 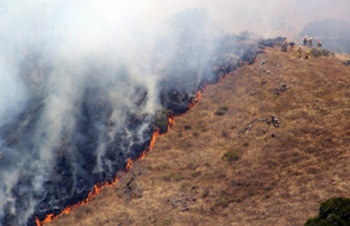 LOEFFLER, Jeffrey Glen (1956-2010), age 53, experienced a heart attack while flying his Cessna to Santa Catalina Island. His plane crashed on the island On July 1, 2010, and Loeffler was killed. He was from Wyoming, Minnesota and was 53 years old. He was survived by two children.

July 2, 2010 [Lompoc Record]: “Plane crashes on Catalina Island, 1 dead. A single-engine plane crashed Thursday on Catalina Island, killing its pilot who had just reported a medical emergency and igniting a brush fire nearby. Los Angeles County Sheriff's Lt. Jeff Donahue said the pilot, who has not been identified, was the only person aboard the Cessna 182P when it crashed shortly after 1 p.m. on the popular tourist destination more than 20 miles off Southern California. Fire inspector Matt Levesque said the wreckage was discovered about two miles from the island's airfield, Airport in the Sky. The pilot had radioed the airport to report he was having chest pains that could indicate a heart attack and that he didn't think he could reach the runway, Donahue said. Fire officials arrived at the crash site about three hours later after battling a 20-acre brush fire ignited by the crash. The fire was 80 percent contained but would probably burn through the night, authorities said. Donahue said several youth camps were in the area, but they were not immediately threatened by the fire.”

July 2, 2010 [Beverly Hills Courier]: “Private plane crashes on Catalina Island, pilot may have had heart attack. A fire ignited by a fatal single-engine plane crash on Catalina Island was considered 100 percent contained early today and about 100 firefighters were assigned overnight to the 20-acre burned area. The Cessna 182P crashed near Echo Lake about 1 p.m. Thursday, shortly after the pilot radioed that he might be having a heart attack, authorities said. The crash site was about two miles short of the runway at Airport in the Sky, sheriff’s Lt. Jeff Donahue at the Avalon Station said. “The pilot radioed in and said he was having chest pains and thought he was having a heart attack,’ Donahue said. “He said he didn’t think he was going to be able to make the runway.’ The crash ignited the fire, which burned about 20 acres of light grass and brush by 4:55 p.m., Los Angeles County Fire Department Inspector Matt Levesque said. Rescuers reached the plane crash about 4:15 p.m., Levesque said. “We were able to reach the plane, and there was one person confirmed dead,’ Levesque said. The pilot was the only person in the plane. About 100 firefighters remained assigned to the fire as of 1:30 a.m. today, L.A. County Fire dispatch supervisor Phil Ulloa said. Morning briefing for the fire was scheduled at 7 a.m. today. Full control of the fire was expected by 6 p.m. today, Ulloa said. No firefighter injuries had been reported.”

July 5, 2010 [TCPP]: “53-year-old Wyoming, Minnesota man crashed his private plane on California’s Catalina Island and died Thursday afternoon after sending a radio message that he feared he was having a heart attack. Jeffrey Loeffler radioed to a traffic advisory frequency that he couldn’t move his right side, was having severe chest pains and might not be able to make it to the runway, said Sgt. Fred Keelin, watch commander for the Los Angeles County Sheriff’s Department’s Avalon station on Catalina. He crashed just minutes later, at 1 P.M., Keelin said Sunday. No one else was on board. The crash ignited an approximately 25-acre brush fire on the island, which firefighters spent the day battling, Keelin said.”

July 9, 2010 [TI/Avalon]: “Crash leads to 20 acres burned. Fire starts after fatal plane crash about 10 miles from Avalon but a rally of firefighters stops the blaze. A plane that crashed about 2 miles east of the airport at about 1 P.M. on Thursday, July 1, killed the pilot and burned about 20 acres of brush in Catalina's interior. Both local and mainland fire personnel descended on the island fire while Los Angeles County Fire Department helicopters dropped water from the sky onto the affected area. Just before noon on Friday, July 2, LAFD Inspector Don Kunitomi reported the blaze had been 100 percent contained. The fire did not affect the city of Avalon and no structures were damaged. There were several youth camps operating near the fire, including Camp Fox and White's Landing. Authorities said they were not considered to be in danger and no evacuations were made. Transportation to and from the island operated as scheduled and the weekend Fourth of July celebrations went on as planned. According to Lt. Jeff Donahue, commander of the Avalon Station of the Los Angeles Sheriff's Department, a male pilot radioed Catalina's Airport in the Sky shortly after 1 P.M. The pilot was Jeff Loeffler, 53, of Wyoming, Minnesota. He was the only person in the aircraft, a Cessna 182P, fixed wing, single engine, four-seat plane. He reported having chest pains. He said he was possibly having a heart attack. He then said he did not think he could make it to the runway. According to official reports, the small plane went down east of the Airport in the Sky, in an uninhabited area near Echo Lake. Sheriff's Air Rescue-5 helicopter transported 75 firefighters to Catalina Island, as well as a Coroner's investigator, and National Transportation Safety Board investigators. Donahue said that although the pilot had lost his life, fortunately, there were no other reported injuries as a result of the crash and fire.”