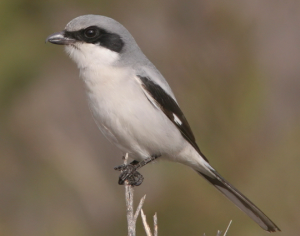 The Southern California island habitat of this small, black-masked bird that uses its hooked beak to kill insects, mice, lizards and birds was so degraded by non-native sheep, pigs and goats on San Clemente Island that by the time it was protected as endangered in 1977 only about 50 birds remained. Following efforts by the U.S. Navy, which controls San Clemente Island, to remove non-native predators, and a reintroduction program, the shrike’s population grew to 136 individuals by 2013.

There are distinct populations of Island Loggerhead Shrikes. The Island Loggerhead Shrike (Lanius ludovicianus anthonyi) is a small predatory bird that hunts from perches. It focuses on a wide variety of prey items from arthropods up to small mammals and even other birds. Shrikes have an interesting habit of impaling their prey items on sharp objects such as spines on vegetation or barbed wire. The island subspecies is endemic to the Channel Islands and is a state Species of Special Concern. 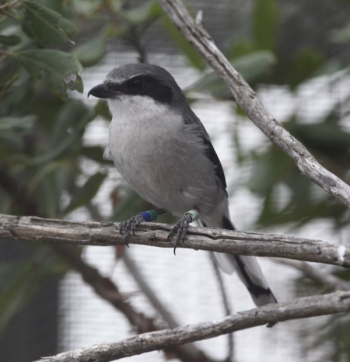 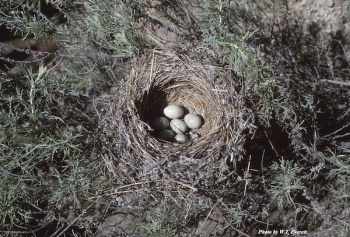 1897 San Clemente Island: “Lanius ludovicianus gambeli—California Shrike. This bird was without question the shyest and hardest to be secured of any on the island. Indeed it was as shy as any hawk I ever saw. It was tolerably common: that is, two or three could be generally seen during an hour's walk. There was a pair in the neighborhood of the windmill where we were camping, and nearly every morning a little after daybreak the male would perch either on the windmill or on the topmost twig of a brush pile on the opposite side of the ravine, and utter its defiant shrike notes. The rustle of the tent door or the click of a gun lock, however, was sufficient to send him up over the ridge, not to appear again for hours. On April 2, I found a nest and succeeded, after lying in ambush for a long time, in securing the female bird. The nest was in a small bush growing out from the side of a canon, and was composed mostly of sheep wool, with an admixture of weed stems and grasses. Five slightly incubated eggs constituted the set. They are not different from eggs of true L. l. gambeli of the mainland, and measure [measurements given]. During our last visit, Mr. Horace Gaylord secured another adult female and a juvenile, and I took another juvenile, making four specimens in all obtained. This shrike is not exactly referable to L. l. gambeli, but appears to be nearer that than either of the U.S. forms...The party consisted of Joseph Grinnell, who had immediate charge of the expedition, and gave special attention to the ornithology and entomology of the islands; Horace Gaylord, who collected mammals; and Harry Gaylord and James Brittan [Britton] who devoted their time to archaeology. The party left San Pedro harbor May 11 in a large fishing schooner... [returning June 9, 1897]”
Grinnell, Joseph The Islands of Santa Barbara, San Nicolas and San Clemente, in the Spring of 1897 Pasadena Academy of Sciences Publication No. 1, August, 1897 (26 pages).

1907 San Clemente Island: “Lanius mearnsi. San Clemente Shrike. Fairly well distributed over the whole Island but extremely shy. March 7 I secured a female with nest and five eggs, incubation two-thirds. This nest is typical of the species; composed of dry twigs and weed stems, thickly lined with rootlets and wool and well concealed in the thick branches of a holly bush in a ravine near the northwest coast. Another nest was found March 8 near the coast midway of the Island, containing one downy young and two infertile eggs. Near Mosquito Harbor, March 19, I secured a female and five fresh eggs. The males were extremely shy, giving the alarm from their lookout perches and leaving the vicinity of the nests immediately upon sighting the intruder. The three nests measure in inches as follows:

“The San Clemente Loggerhead Shrike (Lanius ludovicianus mearnsii), listed as a federal and state endangered species and endemic to San Clemente Island (SCI} off the southern California coast, numbered only about 20 individuals in 1992. Consistently low abundance since the early 1980s has been attributed to loss of nesting habitat because of browsing by feral animals, aggravated by predation on eggs and young by native and exotic predators. To prevent extinction of the subspecies. a multifaceted recovery plan was initiated by the U.S. Navy that includes state, federal, and private cooperators. This paper describes the recovery plan, including: (1) removal of feral herbivores; (2) reduction of predators; (3) initiation of a captive flock; and (4) development of artificial reproductive enhancement, including double-clutching and hand-rearing and releasing of young. To date, shrike nesting habitat is recovering; predators have been reduced around nest sites; captive birds have bred; and wild, island birds have been induced to double clutch.”

1905-1906 Santa Catalina Island: “Lanius sp? About half a dozen shrikes were seen on the golf links back of Avalon. In 1905 three fully fledged juveniles being fed by their parents, were noted. The status of the Catalina shrike has not been determined.” [“These notes are the result of two brief sojourns on Santa Catalina Island in the month of April, eight days being spent in 1905, and five in 1906. Fortunately both trips were made after wet seasons; the hills were carpeted with grass, flowers and insects were abundant.”]
Richardson, Charles H., Jr. Spring Notes from Santa Catalina Island The Condor 10(2):65-68, March 1908

1898 Santa Cruz Island: “...and two pairs of Shrikes, one of which was building, while the other was already occupying a nest. This latter was inaccessible in a tall slim gum sapling and the bird would always slip off and disappear among the trees before more than a glimpse of it could be had. This Shrike has been separated by Mearns and stands in the list as Lanius ludovicianus anthonyi, Island Shrike, the type being taken from the Santa Cruz Island... The main ranch... Shrikes were numerous in this vicinity and contrary to the evidence given in the July Auk, were not really wild. A few were lost by my not using a sufficiently heavy charge in my desire to preserve the plumage as intact as possible, but many of the specimens fell into the large piles of dead brush which they frequented extensively. On one of these brush piles three were bowled over at one shot and not one recovered. This pile was about six feet high and thirty feet across, the birds being in the center when fired at. While trying to find them, a nest of seven eggs was discovered and taken, but the birds had slipped down irretrievably. They must have been having some sort of a row over this nest when shot. Another nest containing six eggs of this species was taken and one or two found which were not completed when I left... Following is a list of birds observed during my stay:- Island Shrike (Lanius ludovicianus anthonyi);...”
Mailliard, Jos., Spring Notes on the Birds of Santa Cruz Island, Cal., April,1898 The Condor 1(1):41-45, April 1899

1907 Santa Cruz Island: “Lanius anthonyi. Island Shrike. Fairly well distributed over the whole island. 16 specimens in all, preserved.” [“At 11:30 p.m., November 19, 1907, my father (H. Linton), Mr. George Willett, and myself left San Pedro harbor in a dilapidated fishing smack and in company with a crawfisherman, one “Cold-foot” Jorgensen. We arrived off the south end of Santa Cruz Island at 10:30 the following day during a stiff norwester. For various reasons we were unable to make camp until the 22nd. It may not be amiss to state here that twice during the blow we were nearly wrecked: once while at anchor in Potatoe Harbor, a broken anchor allowing the boat to drift within the breaker line and nearly onto the rocks. In this instance the timely arrival of Willett and H. Linton in a small boat, saved the day, and incidentally the fishing smack. At another time (the engine having broken down) we were blown nearly onto the rocks of Anacapa Island; but with father at the wheel and Willett and I on the “sheet” we managed to hold her off. I mention the foregoing, and the many sleepless nights spent on the rocky shores, “running” the surf several times each day (with attendant duckings), etc., merely as a warning to those who seem inclined to believe a field naturalist’s life “strewn with roses”. (Its ’ generally strewn with cacti!)”]
Linton, C. B. Notes from Santa Cruz Island] The Condor 10(3):124-129, May 1908