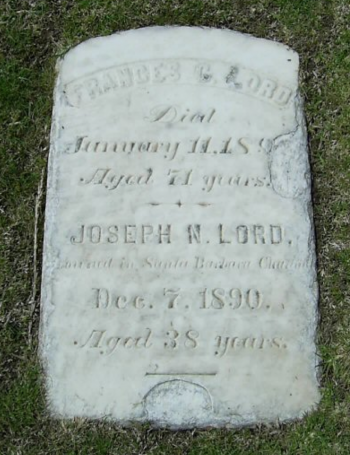 LORD, Joseph Nathan (c. 1852-1890), New York-born son of Norman and Frances Lord. In the 1870 census the family was still in New York; in the 1880 census they had moved to Santa Barbara and Lord was listed as a locksmith, aged 28, and single. In 1882 Lord married Harriet “Hattie” Forbush in Santa Barbara, and they had two children: Anna Mehitable (b. 1885) and George Robert (1887-1975). In 1890, Lord was in command of George Ellis’ steam yacht, Undine, when she wrecked near Anacapa Island on December 7, 1890. Captain Lord, 38, the engineer and a crewman drowned. Although the wreck report supposes Undine collided with another vessel, it is clear from the account of Rosaline Vasquez, the only survivor, this was not the case. Fred Forbush, who was working aboard Star of Freedom when they found the wreck, was the brother-in-law of Captain Lord who was married to Fred’s younger sister. Lord’s will, filed April 19, 1886, left what he had to his wife, Harriet. He is buried in Santa Barbara Cemetery and shares a headstone with his mother, Frances C. Lord.

December 6, 1890 [LAT]: “Lost in a storm. The sloop Undine capsized off Hueneme. Three men drowned before assistance can arrive. A passing steamer finds the wreck too late. Ventura, Dec. 5. — The sloop Undine, a sixteen-ton steam propeller owned by Capt. Ellis of Santa Barbara, was wrecked at 4 o'clock this morning, ten miles from this port. She was used in the fishing trade and was returning from Anacapa Island with a cargo. The crew of three men were all lost. The steamer Santa Cruz sighted the wreck, and found one man clinging to the bottom, but he sank from exhaustion before assistance could be given him.”

December 10, 1890 [SBDI]: “At last the mystery of the schooner Undine solved. Rosalindo [Rosaline] Vasquez arrives on Star of Freedom. He is the only survivor. Early this morning people at the beach sighted a small schooner which old seadogs pronounced the Star of Freedom, a small vessel belonging to the Santa Cruz Island Company. The wind was light and it was eleven o’clock before she got within easy distance. Then Fred Forbush jumped into a small boat and just beyond the kelp boarded her. On the vessel he found Rosalindo Vasquez, the last survivor of the unfortunate schooner, the Undine, which left this port one week ago today, bound for the fishing camp on the Island Santa Cruz. A representative of this paper visited young Vasquez and from him learned the full details given below. The young man looked pretty well used up and shows in many ways the hardships he went through. He told his story in a simple manly way quite touching to hear. The story. ‘We left Santa Barbara at seven o’clock A.M., December 3rd,’ said Rosalindo. ‘All went well till we got within five miles from Lady Harbor, Santa Cruz Island. The wind had been severe for some time and the sea was choppy and boisterous. The propeller became useless and one moment was deep in the water and next entirely out of it and racing terribly. We stopped the engine and ran along under full jib, full foresail and double-reefed mainsail. We pitched and rolled terribly and Fred, the engineer, asked if we hadn’t better take in sail? The Captain said ‘I am running this vessel and know what I am about.’ He then went below. At that moment an angry puff of wind caught us and turned us over, the vessel like a shell. We took in a vast wave which burst the hatches, and we were capsized. I was at the foremast, the engineer was at the wheel and the Captain rushed on deck and ordered the halyards cast lose, but the wind was too heavy and the sails would not fall. I grabbed my knife and cut the painter on the small skiff on deck. As the boat turned I jumped in, losing the oars. I called ‘For God’s sake try and get into the boat with me!’ But I had no oars and drifted away beyond reach, and Captain J. N. Lord and the engineer, Fred, were left on the capsized vessel. I drifted on and on. All that afternoon and that terrible dark, windy, rainy night I was on the water in that little boat. About sunrise, December 4th, I drifted on to Anacapa Island. I had no way of building a fire and nothing to eat. I killed a sheep and my hunger at length drove me to eat a little of the raw meat. I was on the island three days. Last Saturday I got into my boat and managed in four hours to reach Santa Cruz Island. I went to the fishing camp and got food. Last night I embarked on the Star of Freedom and we got here today as you see. I am the only survivor and have had a terrible experience. I am very glad to set foot on shore again.’ It seems that the great reason of the capsizing of the Undine was the insufficiency of ballast. Captain Ellis was intending to add a good deal to it on her return. The saving of this young man was almost a miracle. He was entirely without oars, food or water. Chance only saved him.”

December 11, 1890 [LAT]: “Santa Barbara. Colice Vasquez, one of the crew of the wrecked yacht Undine, arrived here today from Anacapa Island. He says that the Undine was capsized during the storm. He cut away the lifeboat and a big wave carried it away from the yacht. Captain Lord and the engineer were drowned.”