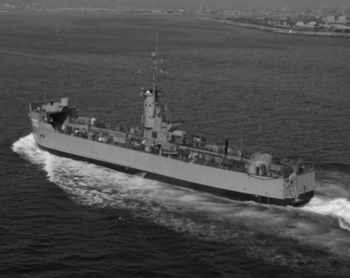 LSM 455 (#) (1944-1956) was wrecked at San Clemente Island on November 20, 1956. There were 558 LSM (Landing Ship, Medium) made for the US Navy between 1944 and 1945. The majority of vessels built on this versatile frame were regular transports, however there were several dozen that were converted during construction for specialized roles. Most vessels of this type were scrapped during the Cold War, but several were sold by the United States Department of Defense to foreign nations or private shipping companies.