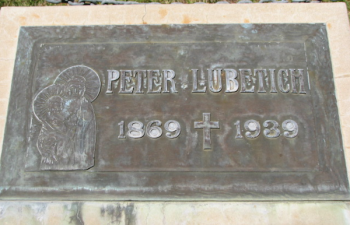 Lubetich, Peter (1871-1939), born in Austria, he immigrated in 1891 and spent most of his life living at Avalon, Santa Catalina Island. In the 1920 census he was single and worked as a store clerk. He managed the golf course for many years (1900-1921). Lubetich was the organizer of the Santa Catalina Island Twenty-Five Year Club — composed entirely of persons who had resided on Santa Catalina for that number of years.

“Pete Lubetich is still wearing his '25 years on Catalina' button and takes his daily walks around town and cashiers here and there and yonder.

He died at age 69 after a month-long stay in the Avalon hospital.

January 22, 1902 [LAT/SCat]: “Avalon. The boatmen who have heretofore occupied the beachfront, between the bath house and the steamer wharf, are having troubles of their own. A short time since an edict went forth from the Banning Company that all the space between the two wharves should be vacated, as it was their intention to keep it clear of all obstructions, and the boatmen must find locations for their stands eastward from the steamer wharf. Yesterday the evicted boatmen drew lots for the best location open to them Peter Lubetich won first choice; Clarence Jargstorff second; Chriss Ringson third; Gray brothers fourth; Vincente Moricich fifth; Thomas Washburn sixth; Jim Gardner seventh…”

September 15, 1902 [Loud Diary]: “Pete Lubetich has now disposed of his boating business and will now be in entire charge of the golflinks.”

”November 27, 1917 [TI/Avalon]: “Catalina can grow some vegetables! The other day Pete Lubetich visited Middle Ranch and while there secured a turnip for his ‘meatless dinner’ Tuesday. It weighed seven pounds and ten ounces, was perfectly sound and was served Tuesday at the Bristol Cafe.”

July 23, 1924 [TI/Avalon]: “More than three hundred patrons were unable to secure seats at the Strand Theatre last Wednesday evening when Manager Peter Lubetich used the film of the latest Zane Grey story, 'The Wanderer of the Wasteland'. The picture was the second colored film to be shown in Avalon and was greatly appreciated. Dr. Grey and party were present in the audience.”

January 7, 1925 [TI/Avalon]: “Mr. Peter Lubetich has received the pins for the Catalina Island Twenty-Five-Year Club, and they are indeed handsome. It is in the form of a miniature banner, somewhat like the letter W turned sideways, with the top to the staff. The outline is in Roman gold, while the face of the pin is divided into two fields, red and blue, by a cross bar. On the red field are the letters and figures '25 yrs.' On the divided streamer are the words 'Catalina Island' Those who have been residents of Catalina for twenty-five years or longer are entitled to join the club. Some of the members who are wearing the pins are certainly quite proud of them. One of the new members is E. E. Ford, of Alhambra. who was in this island city for a few days last week.”

May 20, 1925 [TI/Avalon]: “The other day Pete Lubetich went to Los Angeles on a business trip. Naturally, when he has visited the metropolis he has gone back and forth from the harbor via the electric cars. Since his arrival at Catalina many years ago (he is a member of the Twenty-Five-Year Club), he has never ridden in a an automobile any distance. On the trip referred to Mr. R. R. Johnstone of the Glenmore Hotel caught him just as he was ready to return to the harbor, and invited him to ride down to the steamer in his auto. Though somewhat leary of such travel, Pete accepted the invitation, and enjoyed the ride the longest one since he has been in Southern California. The machine was a dandy, Pete was delighted, and hints that the pleasure of motor travel has captured him. Wonder if he'll get a limousine?”

August 29, 1925 [TI/Avalon]: “One of the latest of the old-timers to receive the official banner button of the Catalina Twenty-five Year Club, according to promoter Peter Lubetich, is Mr. John D. MacLean of Metropole Avenue.”

March 25, 1937 [TI/Avalon]: “The Los Angeles Sunday Times of March 23, 1924 printed a facsimile of the first page of the first number of 'The Wireless', which Mr. Lubetich will be glad to show to any person interested.”

February 23, 1939 [TI/Avalon]: “Did you know that Catalina has a Twenty-Five-Year Club, organized by Peter Lubetich? Its members have lived on Catalina Island twenty-five years. They follow:

December 7, 1939 [TI/Avalon]: “Peter Lubetich, over 40 years resident of Avalon, passed away Monday morn. Almost everybody who stayed any length of time in Avalon came to know Pete, as he was familiarly called. He was a quiet gentleman, always ready to help friends and acquaintances if he had an opportunity to do so. Late during last summer he was so unfortunate as to receive a broken arm. Later, for the sake of his health, his teeth were extracted. Between the trouble with his arm and the difficulty of eating without teeth, his health gradually failed until about a month ago, when he entered the Catalina Hospital and from then on faded away until death relieved his sufferings. Peter Lubetich was born at Sutivan Brac, Dalmatia, Austria, June 20, 1891, so was well along in his 69th year at the time of his death. As a young man he came to America, finally reaching Sacramento, California, where he became a restaurant worker. Later, associated with Jerry Illich, he conducted a restaurant on Spring Street in Los Angeles. Then he went to Santa Ana and opened a restaurant there. From December 1897 to 1919 he was in the employ of the Banning Company in their hotel enterprises. In 1900 he became manager of the Catalina Country Club, a place which he held until 1920, when he became manager of the Sumner Avenue Theatre, where he remained until 1925. Following that he became cashier at the Grill Cafe, conducted by Joseph B. and Michael J. Cameron, where he remained until about two years ago. Although few knew it, Mr. Lubetich was something of an inventor. One of his productions was a near tie-pin. He also was the organizer of the 'Catalina Twenty-five Year Club' — composed entirely of persons who had resided on Santa Catalina for that number of years. So far as the writer knows, the subject of this sketch never married. The following cousins of M. Lubetich came down to attend his funeral: Mrs. Minnie Licaich, a cousin from Sacramento; Mrs.Margaret Barta, a cousin from Portland, Oregon; Paul L. Bernardis, a cousin by marriage, and his son, Paul L. Jr., from Sacramento; and a friend Paul Kukock, also from Sacramento. The funeral services are announced to take place this (Thursday) morning, at 9 o'clock, from St. Catherine's Catholic Church, to be followed by interment in the local cemetery, on the island he loved so much.”