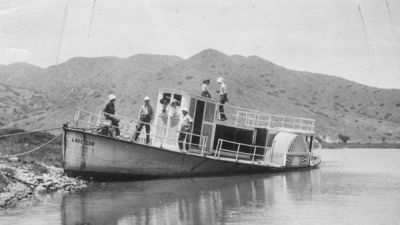 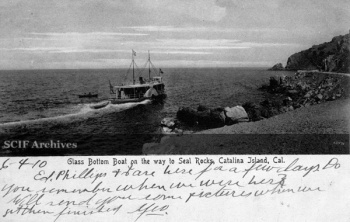 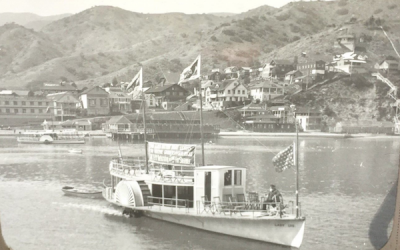 July 5, 1903 Catherine MacLean Loud notes in her diary: The Meteor Boat Company of Los Angeles was organized. Enthusiasm grew with the popular Mon Ami, so that by June 29, 1903 the Avalon shipyards on Whittley Ave. again turned out a side wheeler, round bottom glass bottom powerboat, the Lady Lou, owned by E. M. Mathson, O. P. Smith, Ralph S. Compton and Irving L. Newberry, who were all in the Avalon boat business for several years. The Lady Lou is 45 feet long, 17 ½ foot beam, with a 20 horsepower union engine of the latest pattern housed in the center of the boat. She has a toilet and lavatory. Her side wheels were 8 feet in diameter. The plate glass windows of which there are six, three on each side of the engine, each are 20” x 38” inches and ¾ inches thick and weighed 100 lbs. each. Her capacity is for 100 persons. She has one shaft and one clutch on the engine to go ahead or astern. Her first Captain was Irving N. Newberry with Ralph Compton, Engineer. Capt. Trefethen took a hand in her launching off the Avalon shore. The maiden trip of the Lady Lou was July 14 to Seal Rocks with a load of passengers. Competition became keen on the two larger glass bottom powerboats, and to increase her popularity of the Lady Lou carried three Negro Minstrels to entertain her guests. Then the Cleopatra followed by hiring soloists for her trips with an orchestra.

July 15, 1903 [LAT/SCat]: “Avalon. Lady Lou, the new glass-bottom boat of the Avalon Boat Company, made her maiden trip this morning, taking a good load of sightseers to Seal Rocks. She proved a success from every standpoint.”

July 26, 1903 [LAT/SCat]: “Avalon. Competition among the glass-bottom boat people is becoming strenuous. The Cleopatra has maintained an orchestra for some time, and today the Lady Lou management brought over an orchestra of three colored musicians, who made the beach ring with their negro melodies.”

September 2, 1903 [LAT/SCat]: “Avalon. H. Alexander of Sandusky, Ohio, was a passenger to Moonstone Beach on the Lady Lou the other morning, and found some fishing lines and kooks aboard which were not working because of no bait…”

September 4, 1903 [LAT/SCat]: “Avalon. The passengers on the big boat Lady Lou were treated to a great sight this morning on their return trip from Moonstone Beach. As they neared Avalon a few splashes were observed, and some one remarked: ‘That looks like tuna!’ The tuna season proper having long since passed…”

September 23, 1903 [LAT/SCat]: “Avalon. ‘The finest ever’ is what everybody said who went on the trip to the Isthmus yesterday on the Lady Lou. It was the first trip ever made by glass-bottom boat to that classic port, and was the pioneer in exploring the beautiful marine gardens lying above Long Point, where there are points which make the beauties revealed by Aladdin’s wonderful lamp pale into insignificance…”

December 8, 1903 [LAT/SCat]: “Avalon. The Lady Lou, one of the side-wheel power glass-bottom boats which did business here last summer, but was taken over to San Pedro at the close of the season, arrived in the bay again last night, ready for another campaign.”

December 27, 1903 [LAT/SCat]: “Avalon. There were a large number of excursionists who took advantage of the Christmas season to visit Catalina. In the afternoon many of them enjoyed a ride on the Lady Lou to see the seals.”

January 5, 1904 [LAT/SCat]: “Avalon. The following party went to Moonstone Beach this morning on the Lady Lou and spent the forenoon in hunting gems…”

April 7, 1904 [LAT]: “Avalon. The Conservative Life Insurance Company of Los Angeles took Catalina by storm today. An excursion numbering nearly one hundred, including managers and employees with wives and sweethearts, came over on the Warrior, arriving at noon. After lunching at Hotel Metropole they lined up on the lawn in front of the hotel and had a photograph taken of the group. Then the glass-bottom boats Cleopatra and Lady Lou being placed at their disposal, everybody viewed the marine gardens and the aquarium and at 3:15 left for the mainland. The day was perfect and everything conspired to make their outing a happy one.”

July 23, 1904 [LAT/SCat]: “Avalon. The Meteor excursion and barbecue at the Isthmus assumed such proportions today that the launch Lady Lou was pressed into service to carry the crowd…”

August 6, 1904 [LAT/SCat]: “Avalon. There was an outpouring of people from Avalon this morning for the Isthmus barbecue. The Lady Lou and the Meteor carried over 100 persons, and the Avalon carried fifty more.”

April 7, 1904 [LAT]: “Avalon. The Conservative Life Insurance Company of Los Angeles took Catalina by storm today. An excursion numbering nearly one hundred, including managers and employees with wives and sweethearts, came over on the Warrior, arriving at noon. After lunching at Hotel Metropole they lined up on the lawn in front of the hotel and had a photograph taken of the group. Then the glass-bottom boats Cleopatra and Lady Lou being placed at their disposal, everybody viewed the marine gardens and the aquarium and at 3:15 left for the mainland. The day was perfect and everything conspired to make their outing a happy one.”

July 23, 1904 [LAT/SCat]: “Avalon. The Meteor excursion and barbecue at the Isthmus assumed such proportions today that the launch Lady Lou was pressed into service to carry the crowd…”

February 13, 1905 [LAT/SCat]: “Avalon. This winter on the island has been one marked by a peculiar lack of storms… but at 10 o’clock the wind came in from the northeast and began to kick up quite a sea. The fishing parties hurried in, and the Lady Lou, which had a large party out to view the marine gardens and gather moonstones at Moonstone Beach, hastened back…”

February 25, 1905 [LAT/SCat]: “Avalon. The big glass-bottom power boat Cleopatra, which is unique among power boats for the reason that she is perhaps the only ocean boat in the world which requires no wharf at the beach to land, but simply glides up on the beach to receive and discharge her passengers, was chartered yesterday to carry the Hotel Maryland excursionists to Seal Rocks. In landing to receive them she ran up on the beach on a receding tide, which left her stuck hard and fast. Her sister boat, Lady Lou, tried for half an hour to drag her off, but was obliged to give up as a bad job, when Captain Tripthen of the ship Cabrillo had a line passed out to his ship and soon had her in the swim again.”

June 12, 1905 [LAT/SCat]: “Avalon. The crew of the Lady Lou, the power glass-bottom boat, which plies to Seal Rocks, came upon a number of baby seals on one of the rocks yesterday, and for the entertainment of the passengers one was picked up and taken aboard, and afterwards brought up to Avalon. The little chap showed not the least sign of fear, but seemed to greatly enjoy being petted. It was returned to the rock in the afternoon where the mother seal was found, and when it was restored to her she seized it, as would a cat, by the back of the neck, and leaping into the water swam to a neighboring rock where she felt secure from vandals, and pushing the little one up out of reach of the waves scrambled up after it. This morning Roy Staples, first mate of the Lady Lou, brought up another little foundling, which apparently had no mother, and proposes to make a pet of it…”

April 26, 1906 [LAT/SCat]: “Avalon. The children of the public schools will have a holiday tomorrow, and to show that their hearts are in the right place they will improve the occasion by running an excursion to Moonstone Beach in the afternoon, the management of the glass-bottom power boats having placed the Cleopatra and the Lady Lou at their disposal. The little folks will sell all the tickets they can and turn over the proceeds to the relief fund.”

June 29, 1906 [LAT/SCat]: “Avalon. The San Diego, an excursion boat plying out of Long Beach, came in yesterday with excursionists who were transferred to the glass-bottom boat Lady Lou, and shown the marine gardens.”

October 4, 1907 [LAT/SCat]: “Avalon. The glass-bottom boats, Lady Lou and Empress, used at Catalina Island during the summer for viewing the marine gardens, have been brought to Long Beach for the winter and dry docked at the Western Boat and Engine Works for repairs and an overhauling.”

October 4, 1907 [LAH]: “Long Beach, Oct. 3. — The Lady Lou and the Empress, the glass bottom power boats used through the summer by the Meteor Boat Company for making trips across the marine gardens at Catalina Island, have been brought to the Western Boat and Engine Works at the foot of Third Street for the winter season.”

September 3, 1909 [LAT]: “Avalon. Avalon is preparing for the Venetian evening, which will be celebrated lighted by special dynamos, and all the launches and small craft will take part in the water carnival, conveying visitors free of charge to and fro, over the glowing waves…”

July 29, 1913 [LAT]: “Avalon. Forty boys of The Times Camp were guests of the Meteor Boat Company for a glass-bottomed boat ride on the Lady Lou to White’s Landing this morning…”

December 1, 1914 [TI/Avalon]: “The glass-bottom powerboat Lady Lou arrived in the bay Saturday. The craft has recently been overhauled and painted gray, which gives it a war dog’s appearance.”