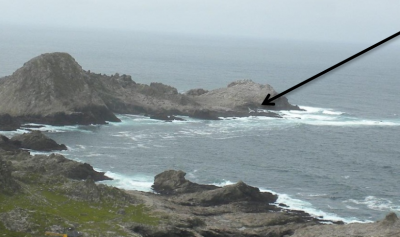 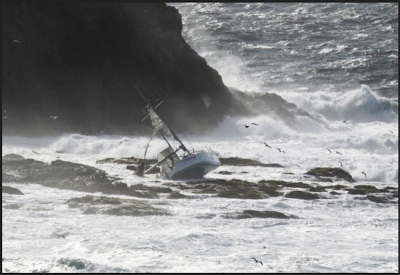 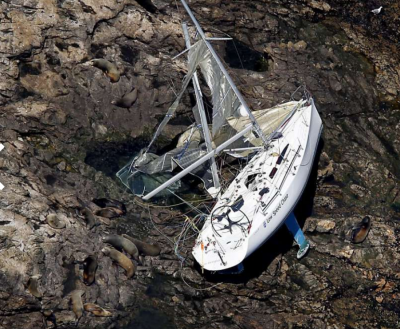 Low Speed Chase (#) (-2012), a Sydney 38 racing sailboat wrecked on April 14, 2012 at the Farallon Islands during the San Francisco Yacht Club's 2012 Full Crew Farallones Race, a racing tradition started in 1907. Forty-nine boats were entered in the race in 2012. Eight crew were aboard and only three survived. Five crewman were lost:

The hull of the vessel was salvaged by helicopter. Ballard Diving and Salvage crew members flew to the island in an Aris helicopter, prepared the wreckage and hoisted the roughly 15,000-pound vessel to Half Moon Bay.

Since the 1980s, at least nine sailors have died on the 27-mile course from the bay to the Farallones. This marked the only fatalities in the history of this particular annual race that was first held in 1907.

“The Wave. I see another wave approaching in the distance. It’s coming from the same direction as the other swells but it’s massive. I’ve seen large waves before but this is unlike anything I’ve ever seen outside of big-wave surf videos. As the wave approaches it begins to face up, its front flattening as it crests. By the time our boat meets it, there’s no escape route. Alan steers the boat into the wave and the bow of Low Speed Chase ascends the breaking wave, which seconds sooner would have been a giant swell and seconds later would have already broken. Instead, we’re heading into a crashing wall of water with 9-10 knots of boat-speed and it breaks directly on us. I lock my right arm to the bottom lifeline and brace for the impact. The last thing I see is the boat tipping toward vertical with a band of water still above it. A single thought races through my head: “This is going to be bad.”

After the impact I was underwater until the boat righted itself. Confused and disoriented I looked around while water cleared off the deck. Nick and I were the only ones still on the boat. The sails were shredded, the mast snapped and every flotation device had been ripped off. We immediately began to try pulling our crew members back into the boat but a second wave hit us from behind. This one ripped me off the boat and into the break zone. Nick barely managed to stay aboard as the boat was tossed by the breakers onto the rocks. I couldn’t tell if I was in the water for a minute or an hour, but according to Nick it was about 15 minutes. People have asked me if I swam for shore. The best way to describe the water in the break zone is a washing machine filled with boulders. You don’t really swim. The water took me where it wanted to take me, and when I was finally able to climb from the surf onto low rocks I heard Nick shouting from the distance for me to get to higher ground. Together we located Jay further down the shoreline. He was out of the surf but trapped on a rock surrounded by cliffs. From what we could see, nobody else had been able to climb to safety.”

December 14, 2012 [SFGate]: “The father of a Larkspur woman killed in a sailboat accident near the Farallon Islands in April has sued the owner of the yacht for wrongful death, and for the pain and distress his daughter suffered as she drowned. Corey Busch, a former San Francisco Giants executive, filed the lawsuit in San Francisco Superior Court this week against James Bradford of Chicago, owner of the yacht Low Speed Chase. Bradford was one of three survivors in a racing accident that claimed the lives of Alexis Busch, 26 and four other crew members after a pair of massive waves swept them overboard April 14 during the Full Crew Farallones Race. Also killed were Jordan Fromm, 25, of Kentfield; Alan Cahill, 36, of Tiburon; Marc Kasanin, 46, of Belvedere and Elmer Morrissey, 32, a visiting researcher from Ireland. The two other survivors were Bryan Chong, 38, of Tiburon and Nick Vos, 26, of Sonoma, who was Busch's longtime boyfriend. The lawsuit by Cory Busch says Cahill, who was the vessel's captain hired by Bradford, "cut corners" when he sailed into a dangerous area that other boats avoided during the race around the Farallon Islands. That decision led to waves flipping the boat and killing Busch and the others, the suit claims. The crash was one of the worst yacht racing accidents in the Bay Area in decades and marked the only fatalities in the history of the annual race that was first held in 1907. Similar to the lawsuit, a report by a national governing body for sailing concluded the April 14 crash was the result of the boat's path through a shallow stretch of water near the islands. The July 31 probe from US Sailing says experts believe the decision on the boat's course was not made "with an understanding of the risks." Low Speed Chase was one of 49 boats that left the San Francisco Bay to make the journey around the uninhabited islands that sit about 27 miles west of San Francisco, the report says. As the Chase started to round the islands, it passed over an underwater ledge that some of the other boats were purposely sailing around. The ledge creates conditions where waves can grow to 30 feet in height, the suit says. Low Speed Chase was flipped and tossed onto the island by waves, which dumped all but one crew member into the water. Reached by phone this week, Bradford declined to discuss the suit, saying, "It's a private issue between me and the survivors." "I almost lost my life too," he said, adding that his friends died. "It was horrible, even to survive." Bradford said he has not faced criminal charges in connection with the crash. While the US Sailing report focuses on the boat's course, it also says different life jackets could also have saved lives. Specifically, the report noted, higher buoyancy jackets that inflate automatically might have helped. The experts also said thigh straps to keep the jackets secure could have improved survival chances. However, in the process of their investigation the experts learned that other racers didn't comply with minimum safety equipment standards. "It is not clear whether these skippers were unaware of the requirements or simply ignored them," the report says. In the suit, Busch's family doesn't list a dollar amount, but they're seeking compensation for funeral expenses as well as punitive damages, which are intended to punish bad behavior, from Bradford. Michael Kelly, an attorney for the Busch family, said that because no criminal action has been taken against the boat owner, the family wants to hold him accountable for an avoidable tragedy. "It's become clear to them that this shouldn't have happened," he said in interview.”