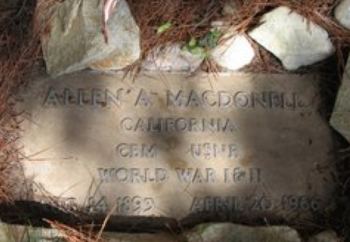 August 10, 1890 [LAH]: “The last jewfish capture took place on Sunday. The fish was a 250-pounder and its captors were Lew Parcells, D.E. Merriam, Geo. Elliott and Sandy Macdonnell.”

August 30, 1903 [LAH]: “Councilman Ed Kern distinguished himself catching yellowtail this morning while out in the launch Spray as the guest of Sandy MacDonnell.”

August 6, 1924 [TI/Avalon]: “Thirty-one years ago August 14th, Captain Allen Macdonnell of the good ship Betty O, plying between Avalon and the Isthmus, was born in a little cottage where now stands the Strand Theatre on Sumner Avenue. His father, Captain A. W. Macdonnell, is now a resident of Los Angeles, but Captain Allen says "Catalina is good enough for him." For nineteen years the young man attended school and later visited many sea ports. Three years ago he returned to Avalon, where he has since made his home.”

January 25, 1933 [TI/Avalon]: “Mr. Macdonnell's sons, Douglas, Allan and Charles, and his daughter Dollie, were born on Catalina Island. Mr. Macdonnell's father, A.A. Macdonnell, was a noted construction engineer. He completed the difficult task of building the Washington Street tunnel under the Chicago River, the tunnel that, because of burned bridges, saved many lives during the Chicago fire of 1871. He built also the first railroad in Cuba in 1858-59 and the tunnel that still supplies Cleveland with its drinking water, a feat many insisted could not be performed because of quicksand.”

September 15, 1938 [TI/Avalon]: “Captain Allan A. Macdonell has taken a new position as Captain of the yacht Manks for A. R. A. White of Los Angeles. In a few months they will leave for Gloucester, Mass., where a large fishing boat will be purchased, brought over and remodelled in San Pedro. It will be entered in the Hawaiian Yacht Race. Capt. Al Macdonell will be at the helm. Some may not know it, but Macdonell is a licensed deep water sea captain, and an expert in the science of navigation.”

June 15, 1939 [TI/Avalon]: “Did you know that Douglas Avalon Macdonnell, the first American child born on Catalina Island, was brought into this world by Dr. Bishop? Mrs. Charles Browning Parker was the first woman friend to assist and care for the mother — as Mrs. Parker relates it, the night was a very windy one. So strong was the wind blowing it snapped the center pole of the tent in which they lived, the upper part sticking into the center table, which held the tent aloft until the child was born and the storm was over. The father was nick-named Sandy Macdonnell, and operated the boat Fleet Wing at that time. Sandy was a good father and lover of his wife and family; he would never allow her to wash the baby's clothes. This he would do each night when he returned after his day's work with his fishing boat.”