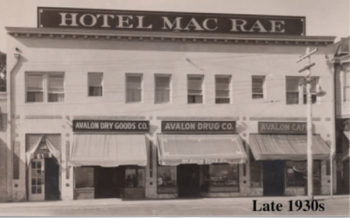 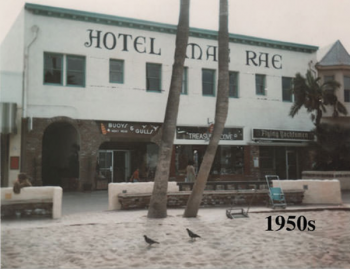 In 1920, after the great Avalon fire, Herbert MacRae broke ground for his new namesake hotel, opened on Crescent Street in time for 4th of July, 1921. It was advertised as the "lst Fire Proof Hotel in Avalon."

March 23, 1932 [TI/Avalon]: “ ”Mrs. MacRae laid to rest. Funeral services were held Friday, March 18 at 10 A.M. in the Wee Kirk o' the Heather at Forest Lawn Memorial Park in Glendale, for Mrs. Margaret G. MacRae, age 50, wife of the late Herbert D. MacRae. Mrs. MacRae passed Away Tuesday, March 15, at her home in Los Angeles. The interment was on the Sunrise Slope in Forest Lawn. Mrs. MacRae (née Margaret Grant) was born at Hardwood Hill, Nova Scotia, and lived there during most of her childhood. She came to California in 1901, and to Catalina in 1902. Here she became manager of the curio business of W. M. Hunt. June 3, 1910, she married Mr. H. D. MacRae. Later she and here husband became proprietors of the business, which was carried on under the firm name of H. D MacRae Co. She is survived by a daughter, Miss Margaret May MacRae; a sister, Mrs. Thomas H. Dugan of Denver, Colo., and two brothers, John G. Grant, of Wrangel, Alaska, and James R. Grant, who lives at the old home in Nova Scotia. Mrs. MacRae was a member of the Eastern Star, and the funeral services were conducted by officers of that organization, assisted by Mr. Ive H. Overholtzer.”