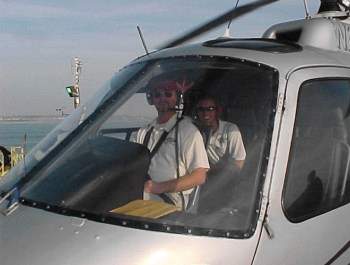 MAILLET, Emeric (c. 1975-2008), pilot and one of three people killed at the Isthmus on Santa Catalina Island when their helicopter malfunctioned. Also killed were John Terry and Tania Hurd.

May 25, 2008 [LAT]: “Three people were killed and three others were injured, two critically, when a sightseeing helicopter crashed Saturday morning near Two Harbors on the remote west side of Santa Catalina Island, Los Angeles County sheriff's deputies said. The helicopter, registered to the sightseeing company Island Express, crashed about 9:30 a.m. near the Little Red Schoolhouse's baseball diamond, a short distance from the town's only hotel, the Banning House Lodge, Deputy Denise Fuchs said. A witness saw a fireball coming from the exhaust pipe of the helicopter as it flew over the water, sheriff's officials said at an afternoon news conference. The sky was overcast but there was negligible wind and no rain at the time of the accident, officials said. Two men and a woman were pronounced dead at the scene, said Los Angeles County Supervising Fire Dispatcher Melanie Flores. They could not immediately be identified, a spokesman from the coroner's office said. Two people with critical injuries were flown to Harbor-UCLA Medical Center in Torrance. Another injured person was taken to County-USC Medical Center in downtown Los Angeles, Flores said.”

May 28, 2008 [LBPT]: “LONG BEACH - Family members on Wednesday remembered John Terry as a motivated 25-year-old who loved his job as an assistant manager for Island Express, a Long Beach-based helicopter company. Terry was riding in a helicopter operated by Island Express when it crashed on Catalina Island Saturday morning, killing three people and injuring three others. The Eurocopter AS-350 reportedly took off from Long Beach and went down in drizzly weather about 9:20 a.m. near the Banning House Lodge at Two Harbors. Also killed was the aircraft's pilot, Emeric Maillet, 33, of Lakewood, and Tania Hurd, a 46-year-old culinary arts teacher at John Burroughs High School in Burbank. The three injured, two women and one man, were transported to area hospitals. Two were critically injured. Reports of their conditions were not available on Wednesday. Authorities are still not sure what caused the crash. National Transportation Safety Board spokesman Terry Williams said all of the wreckage was recovered on Tuesday and that the helicopter's turboshaft engine is being shipped back to the manufacturer for a "teardown" analysis. The entire investigation could take up to a year, he said. Terry's brother, Tony Natale, said the family is in a deep state of shock. They're also dealing with another loss. Less than two week's earlier, Terry's aunt, Cindy Donahoo, died of a heart attack."It's been a rough week," Natale said. Terry's family has houses in Avalon on Catalina and in Long Beach, his brother said. Terry grew up traveling between the two cities until he started high school in Avalon. When he turned 18, he moved permanently to Long Beach where he got a job with Island Express. Pete Ruiz, station manager for Island Express, said Terry was his "right-hand man." "He was the most organized person I ever worked with," Ruiz said. Terry was a ramp agent who would accompany the pilot on flights to help unload the equipment and embark passengers. Ruiz said Island Express, a relatively small company with about 21 employees, was in mourning this week. It is a family-run business that has been operating helicopter tours out of Long Beach since 1982. Owner John Moore was not available for comment Wednesday. Maillet, originally from France, had worked at the company for more than six years and was well-respected pilot, he said. "It's been really hard. We've never had a loss like this before," Ruiz said. "We love both of them like family. We always hung out after work; for birthday parties." Ruiz said no one at the company can speculate on what caused the crash. "We're letting the investigators handle it," he said. "We're just taking it day by day." Terry loved working at Island Express and was moving up in the company, his brother said. He was planning to getting his pilot's license and was going to re-enroll at Cal State Long Beach in the fall. "He was a great, well-motivated person," Natale said. He also loved his dog, a golden retriever named Josh.”

[nd, 2008]: “A chartered helicopter from Long Beach-based Island Express crashed on Catalina Island on Saturday, May 24th, killing the pilot and two passengers. The pilot of the Eurocopter AS-350 has been identified as 33 year-old Emeric Maillet of Lakewood. Colleagues of one of the passengers identified her as Tania Hurd, a teacher at John Borroughs High School in Burbank, California. The other deceased passenger is believed to be an employee of Island Express. The names of the three surviving passengers have not been released. All three survivors were flown to mainland hospitals following the crash and two have been reported to be in critical condition. By Monday, a makeshift memorial to Tania Hurd was formed at the main entrance to the campus at John Borroughs High School. Students and faculty were stunned by the loss of Hurd, who founded the culinary arts department at John Borroughs and whose son is a ninth-grader at John Borroughs. School principal Emilio Urioste recalled that Hurd had always wanted to fly in a helicopter - tragically, her first flight on a helicopter was fatal. Relatives of Tania Hurd had docked at Two Harbors to await her arrival, and witnessed the crash. Investigators from the National Transportation Safety Board (NTSB) have flown to Catalina Island to investigate the cause of the crash. A witness reported seeing a fireball erupting from the tailpipe of the Eurocopter AS-350 while it was over the water. Federal investigators have recovered the engine and according to NTSB spokesman Terry Williams, the turboshaft engine is being shipped to the manufacturer for a “teardown analysis”. Investigators suspect engine failure as the cause of the crash. Federal Aviation Administration (FAA) records show that the Island Express helicopter departed from Long Beach and was scheduled to return to that city. The crash occurred less than one hour after the chartered helicopter picked up passengers from Catalina. The helicopter crashed near Two Harbors, on the west side of Catalina Island, a short distance from the Banning House Lodge. According to the website for Island Express, the company offers exclusive tours of Southern California and Santa Catalina Island. Founded in 1982, the company’s website touts that it flies “four top-of-the-line turbine helicopters” and employs three mechanics. In 1985, a helicopter operated by Island Express collided with another helicopter from San Pedro after picking up passengers in Avalon, Catalina’s largest town. One person was killed and 11 people were injured. Coincidentally, Magaña, Cathcart & McCarthy’s Business Director and his family rode on Island Express helicopters on two chartered flights to Catalina just one month prior to the fatal crash. MCM has engaged in aviation accident litigation for over 50 years. We have been involved in most of the major commercial airline accidents around the world and have represented the families of those lost in hundreds of general aviation accidents as well. Two of MCM’s attorneys are general aviation pilots while one of our attorneys flew helicopters in Vietnam. MCM has handled many cases involving helicopters and has investigated and litigated cases against Eurocopter and Aerospatiale. In January of 1992, the divisions of MBB from Germany and Aerospatiale from France merged to form Eurocopter. MCM is currently handling a case involving the crash of a Eurocopter AS350 BA in the Grand Canyon. Our investigation revealed that the aircraft suffered hydraulic failure which led to a loss in control. The case is set for trial this summer. Our deepest sympathy to the family and friends of Emeric Maillet, Tania Hurd and the other victims of the tragic accident in Catalina.” - See more at: http://www.mcmc-law.com/aviation-news/catalina-island-helicopter-crash-2/#sthash.m0ysncVw.dpuf