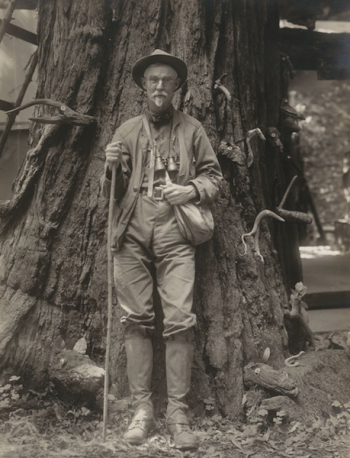 MAILLIARD, Joseph (1857-1945), New-Jersey-born ornithologist and nephew of Julia Ward Howe, author of the Battle Hymn of the Republic. Mailliard’s family moved to California in early 1868, arriving in San Francisco via Panama on the steamer Henry Chauncey. In 1873 they settled in Marin County. Mailliard’s early education was at the hands of a governess, and as a boy, he began collecting birds’ eggs on their Rancho San Geronimo. When he left for the University of California at Berkeley he passed his egg collection on to his brother, John Ward Mailliard, who “improved it.” The brothers remained close their entire lives, building adjoining homes in San Francisco in 1904 where they met daily over their growing collection.

April 5, 1898 through the first of May, Mailliard went to Santa Cruz Island, staying his first week at Scorpion Harbor, where he described the ranch buildings as “old adobes mostly — situated 200 yards from the little beach at a point where the rocky hills appeared to almost close together.” He noted it was some days before he saw the Santa Cruz Island jay. After a week at camp at Scorpion Harbor, on April 12, 1898 Mailliard moved to “Laplaya” [Prisoners’ Harbor].

“There being no wagon road, the trip was made on horseback, the baggage going by schooner. Owing to adverse winds the latter did not show up at Prisoners’ Harbor for three days — a rather unpleasant contingency… Very few birds of any kind were to be found on the tops of the ranges…” From his new camp, he noted: “an occasional bald eagle would swoop down near one, though seldom within shot. In fact the only shot I could have taken was in a place so rough and so far from headquarters that it would have been a difficult undertaking to carry the bird in and its life was spared.”

In March 1918 the Mailliard brothers, along with California Academy of Sciences colleagues John Van Denburgh, Joseph Richard Slevin and academy director, Barton Warren Evermann, visited San Clemente, San Nicolas, Santa Barbara and Santa Catalina islands on a collecting trip. That same year, after the California Academy of Sciences moved into a new fireproof building in Golden Gate Park, the brothers donated their collection to the Academy.

Joseph Mailliard was appointed Honorary Curator of the Department of Ornithology and Mammalogy at the Academy, and soon thereafter, Curator. He was 62 years old. He retired as active curator in 1927 at age 70, but remained active into his 80s. Mailliard died at age 88 on December 12, 1945. He was survived by his son, Ernest C. Mailliard. Joseph Grinnell, whom Mailliard had met in Alaska when Grinnell was 19 years old, named the Santa Cruz Island vireo, Vireo maillairdorum “for Messrs. Joseph and John W. Mailliard, whose conscientious work with the western birds deserves at least this slight token of our recognition.”

MAILLIARD, Joseph. “Born at Bordentown, New Jersey, December 30, 1857. Mailliard's father was at one time secretary of Joseph Bonaparte, former King of Spain, for whom he named his son. He himself is a cousin of Francis Marions Crawford and nephew of Mrs. Julia Ward Howe. Other biographical details may be found in the Condor for January, 1924. Mailliard is one of the most active and enthusiastic members of the Cooper Ornithological Club and an ex-President of the Northern Division. He has given close attention to working out the relationships and ranges of some of the peculiar forms of California birds, and he has described the Kern Red-winged Blackbird (Agelaius p. aciculatus). His name has been associated with that of a song sparrow (Melospiza m. Mailliardi Grinnell)”, and with his brother John, with that of a Vireo (V. mailliardorum Grinnell), and that of a Red-winged Blackbird (Agelaius phoeniceus mailliardorum Van Rossem).

1915: “Through the courtesy of our distinguished fellow-member, Mr. Joseph Mailliard, and his friend, Mr. Arturo Caire, one of the present owners of Santa Cruz Island, I was permitted to spend nearly three weeks, viz. April 3rd to 22nd, with my son William, on this enchanted spot…”