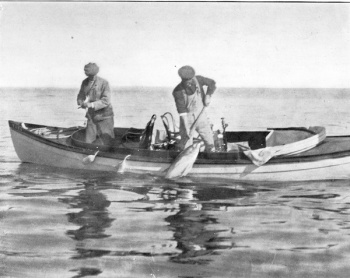 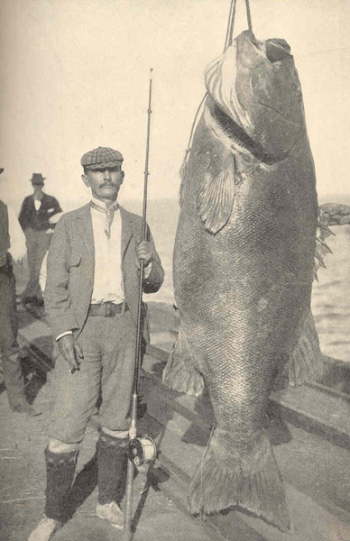 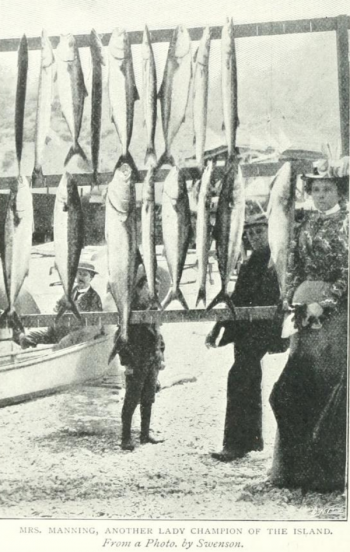 The Mannings are listed in both the 1900 and 1910 Santa Catalina Island Census.

September 20, 1899 [LAH]: “The jewfish which Mr. T. S. Manning brought in Sunday evening makes the world's record for heaviest game fish ever taken on rod and reel. The monster tipped the scale at 370 pounds, and fought hard two hours before coming to gaff.”

August 19, 1900 [LAH]: “F. S. Schenck's good luck at Catalina. Beat world's record. Avalon, Catalina Island, Aug. 18. —The world's record for the heaviest fish landed with rod and reel was broken yesterday afternoon by F. S. Schenck, of New York, who brought in a jewfish, or black sea bass, weighing 384 pounds, which was captured on a 21-thread Cuttyhunk line, after a 20-minute fight. The record has previously been held by T. S. Manning, who, on September 16, last year, took a 370-pounder after a two hours' contest.”

July 3, 1903 [LAH]: “Avalon, July 2. — A large number of passengers came over on the Hermosa this noon, and nearly all will remain over the Fourth... The Sophia Boatman's Club has taken the Fourth of July entertainment in hand. The members have raised money for purses and will endeavor to make this the record Fourth at Avalon. The following program will be presented: Mowing races, beginning at 10 o'clock; wheelbarrow race, potato race, ladies' swimming race, men's swimming race. In the afternoon there will be launch races, pneumatic mattress race, a race between glass bottom boats, a tug of war with five row boats on each side, a fat man's race and a sack race. In the evening all the launches, glass bottom boats, yachts and other craft will be brilliantly illuminated and go out to sea to meet the late boat, escort it in and afterward maneuver around the bay. Captain Clarence Jargstorff will have the direction of the aquatic events and E. L. Doran and Thomas Manning have been named for judges. Arrangements have also been made for a dinky or punt race for a cup between members of the South Coast Yacht Club.”

[1906] “The late Mr. F. S. Schenck, of Brooklyn, was the most devoted and untiring of all the jewfish anglers. The first summer his efforts were fruitless; the next he simply couldn't miss. Day after day, with Harry Elms as boatman, he would hook, fight, and boat fish, within a hundred feet of launches, which never had so much as a nibble. His largest, and for some time the world's record fish, weighed 384 pounds. His plan was to take great quantities of bait to throw over, at the end of the day whatever was left. This naturally resulted in drawing herds of all manner of fish to the place, including the jewfish. But this method also attracted tremendous sharks, which gave considerable annoyance by often taking the baited hook. This left the angler to choose between a lengthy, exhausting contest or the loss of so much line. However, such inconvenience was finally overcome by the substitution of a cod line leader for the piano wire, which quickly severed against the shark's teeth, but held the bass. Its non-kinking quality was an advantage over the wire also. This 'chumming' was also tried with success by Mr. T. S. Manning, formerly of Philadelphia, whose work at a certain abrupt promontory christened it Jewfish Point.” [Magazine Angling Stories, Vol. 5, 1906]

May 4, 1939 [LAH]: “T. S. Manning, pioneer Tuna Club member dies in Belgium. Thomas S. Manning, aged 89, one of the organizers of the Catalina Tuna Club, died at this home in Brussels, Belgium February 23, according to information received at the Tuna Club last week. Mr. and Mrs. Manning had been residing in Belgium for several years. For many years while a resident of Avalon, Mr. Manning was secretary of the Tuna Club, and it was largely through his efforts, and those of the late Dr. Charles F, Holder, that the fishing club became world famous. Some twenty years ago, Mr. and Mrs. Manning left Catalina to accompany the late George Hodgson to Australia and New Zealand. After the death of Mr. Hodgson, Mr. and Mrs. Manning made their home in France, and later moved to Belgium. Mr. Manning had a life membership card in the Catalina Tuna Club, was a part president thereof, and a constant reader of the Islander. With the announcement of Mr. Manning's death a number of old-time Avalonites expressed their sincere regret at the passing of "Tom Manning," as he was more familiarly known to thousands of rod and reel anglers who visited the island for fishing vacations. A resolution of condolence has been sent by the Tuna Club members to the bereaved widow, who will continue to reside in Brussels.”