Difference between revisions of "MARELLIA, Pete" 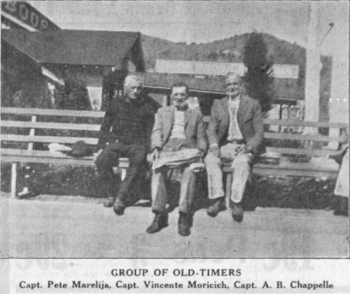 He operated the vessel Torqua. Shortly before his death in 1933, the local paper noted:

Torqua Pete died at age 73. He is buried in Avalon cemetery.

October 5, 1903 [LAH]: “Tony Barbarich, skipper of Tony's glass bottom boat, has posed for a long time as the strongest man on the island. Today his claims were jumped by Nick Marincich, a fisherman who beat him by twenty minutes in a six mile race in glass bottom row boats. The race came about because Tony's oft repeated claims for superiority in strength and rowing ability were so strongly doubted by Pete Marellia of the Torqua that he offered to bet Tony forty dollars that he could find an Avalon man who could best him, and he did! The course was from the steamer wharf to Camp Whittier and return, and much interest was felt in the race, nearly every launch in the bay accompanying the contestants until it was seen that it was to be a walk away for Nick.”

February 8, 1916 [TI/Avalon]: “The launch Torqua, Captain P. Mareilla, has returned from the mainland after being repaired at the Banning Yards, Mormon Island.”

October 1, 1924 [TI/Avalon]: “Catalina Island is soon to be the scene of entertainment for royalty. Douglas Fairbanks is having a model camp prepared at White's Landing, where he expects ere long to have the pleasure of receiving as guests a party of Spanish nobles. No, this is not a movie stunt — but the real thing. The elite of the country will also be present to assist in the entertainment of the royal guests. Captain Pete Mareglia has been engaged by Doug as his major domo, and has already entered upon the discharge of his srduous duties.”

December 15, 1926 [TI/Avalon]: “The Torqua, a local launch captained by Torqua Pete Marellia, carries a force of men back and forth between Avalon and White's Landing daily. Coming down the coast Wednesday evening the master became very sick, and one of the passengers had to take the wheel. Arriving at Avalon the water was so rough that the ittle vessel could not land. A row boat at the mooring place of the launch had been swamped by the rough water, and the men on board had no was of reaching shore. However the plight was discovered, and Oscar Griffith and Whitey Packman, both expert swimmers and divers, secured a rowboat, and although it was very dark and waters momentarily becoming rough, they succeeded in reaching the Torqua and safely landing the three occupants.”

August 19, 1931 [TI/AVALON]: “Captain Pete Marelija, for many years a resident of Avalon, once related a considerable history to the writer [Ernest Windle]. He said:

‘I came to the Island [Catalina] from Santa Barbara on the Santa Cruz Island schooner Keywee. Santa Barbara was then the metropolis of the southwest. In those days we used to regard Santa Cruz Island as we now regard Santa Catalina Island and Los Angeles. If the government had built a breakwater at Santa Barbara instead of San Pedro, the history of Southern California would have been different. The schooner Keywee was 85 feet long, and it made trips between Santa Barbara and Prisoners Harbor at Santa Cruz Island. It was on one of these trips around the Channel Islands that I had my first view of Avalon. This was about 1882. When Shatto bought the island I was operating a small fishing launch named Jupiter. I used to come from Santa Barbara to Avalon, which we then called ‘Timm’s Landing,’ and often would spend several weeks in Avalon Bay during the spring, drying fish on the beach. In those days we used to catch barracuda, yellowtail, sardines, clean them, salt them, dry them, and then pack them in barrels weighing 150 to 200 pounds. We would then take them to Santa Barbara and sell them to the deep-sea ships at from ten to twelve dollars a barrel. I remember one spring when we brought from Santa Cruz Island about twenty barrels of ‘Dago Red,’ and we didn’t leave the Island until all the wine was consumed. Santa Barbara was then the chief port of call for all coast vessels in Southern California. It was thought in those days that Santa Cruz Island would be the pleasure resort of the Pacific Coast, but the owners of that island used to prohibit people from landing on its shores as they do now. Santa Cruz Island in those days was noted for its good wine, cattle and sheep. Occasionally trips would be made on board the schooner Keywee around the Channel Islands, including Catalina, and it was quite an honor to have completed such a hazardous trip in those days.” (Windle's History of Catalina Island)

January 4, 1933 [TI/Avalon]: “Funeral services for Captain Dominic Marellia, age 73, were held Friday at the St. Catherine's Catholic Church, Rev. Father Laganiere officiating. Interment was at the Avalon Cemetery. The deceased is survived by his widow, sister and other relatives. Born in Lussin, Piccolo, Austria, Captain Marellia (known to many Avalonites as 'Torqua Pete' left Austria almost 60 years ago as a stowaway on a trading ship, and came around Cape Horn to the coast of California, arriving in Santa Barbara. For many years we was a well-known fisherman of Santa Barbara, operating a sailboat around the Channel Islands. Later he was employed by the Banning Company of Wilmington and San Pedro, operating vessels La Paloma and Catalina. With Mrs. Marellia he came to reside permanently at Avalon, some 35 years ago. In the early nineties he built a small fishing boat for the purpose of carrying water in five-gallon cans to Avalon from Torqua Springs, near Moonstone Beach, hence his nickname, 'Torqua Pete'...”