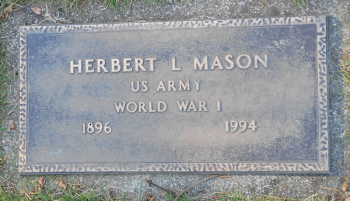 MASON, Herbert Louis (1896-1994) was born in Fond du Lac, Wisconsin, on January 3, 1896, one of a pair of identical twins who were the eighth and ninth children of Thomas and Harriet Mason.

Mason attended Stanford and U.C. Berkley, educated as a botanist who joined the Berkeley Department of Botany in 1925, and served there continuously until his retirement in 1963, the last twenty-two years as professor of botany and director of the herbarium from 1941 to his retirement 1963. During his directorship, the size of the collections doubled, service to the University and the public was promoted, and the role of the herbarium broadened beyond academic research.

Notable acquisitions during this period included the vouchers for the Vegetation Type Map of California, Ira W. Clokey's collection of about 100,000 specimens from the western United States, Joseph P. Tracy's 50,000 specimens from northwestern California, and the collections of Annie Alexander and Louise Kellogg from the western American desert ranges. Under Mason, the number of professional herbarium botanists increased from two to five, with both curatorial duties and research interests. Mason also served as editor for Madroño from 1935 to 1963.

In 1931, Mason married Lucile Roush, a fellow Stanford graduate and Berkeley graduate student who was working on coralline algae with W. A. Setchell, and was in charge of elementary laboratories. Both Herbert and Lucile were awarded the Ph.D. degree the following year. Lucile Mason died in 1986.