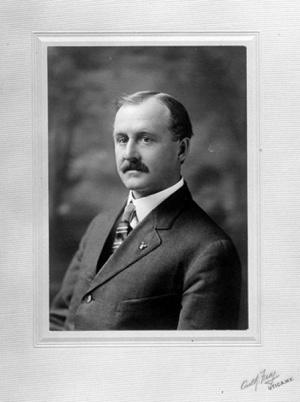 MEARNS, Edgar Alexander (1856-1916), New York-born graduate of the College of Physicians and Surgeons at Columbia University in 1881, Mearns was a surgeon in the medical corps of the U.S. Army for 25 years. Mearns maintained a lifelong interest in natural history and ornithology in particular.

August 22-29, 1894 he visited San Clemente Island with mammalogist Alfred Webster Anthony as a part of the International Boundary Commission. They accessed the island via the U.S. revenue cutter, Wolcott.

“1894. Edgar Alexander Mearns. The late Col. Edgar Alexander Mearns, U.S. Army, while attached to the International Boundary Commission as a medical officer and zoologist, made extensive collections of mammals, birds, reptiles, amphibians, fishes, plants, and other specimens of natural history in Lower California between march and July, 1894. His investigations included an exploration of the Lower Colorado River and the lower part of the Salton River from March 23 to early May, and trips to Nachoguero Valley from June 1 to 7, to the San Isidro range from June 28 to July 3, and to the Tijuana Valley, July 9 to 20, besides incidental work conducted south of the boundary line at various other points. Some of the results of this work are published in Part I of Col. Mearns's report of the mammals of the Mexican boundary. The collections resulting from this work are in the United States National Museum.” [Nelson 1921]

Many plant and animal taxa are named for Mearns, including Acacia mearnsii, native to Australia, and listed as one of the world's most invasive species. Mearns collected it from a cultivated specimen in East Africa when he was a naturalist on Theodore Roosevelt's 1909 expedition.

MEARNS, Edgar Alexander “Born at Highland Falls, New York, September 11, 1856; died at Washington, D.C., November 1, 1916. One of the most active, energetic and enthusiastic field naturalists of this country. During his long service as army surgeon he made large collections in ornithology, mammalogy, botany and ethnology, especially in Arizona, Minnesota, along the Mexican boundary, in the Philippines and on two trips to East Africa. A genus pf Philippine birds has been names Meaernsia, by Ridgway, in his honor. Several species of birds have also been named for him in recognition of his work in the Southwest These are: Cytronyx m. mearnsi, Junco h. mearnsi, Toxostoma c. mearnsi, Melopelia a. mearnsi, and Colaptes c. mearnsi. Of these the last two occur in California. One of the last species he described, only a few months before his death, was the Least Tern of southern California which he named Sterna a. brownii after his old friend E. J. Brown, who had accompanied him on several collecting trips.”

September 5, 1894 [LAH]: “At San Clemente Island. Experiences of two naturalists in search of specimens. San Diego Union: “Give way! Gie Way there lively!” There was need of this emphatic order from Lieutenant West of the revenue cutter Wolcott, as his crew in the long boat attempted to land Dr. Edgar A. Mearns, U.S.A., and Prof. Brandegeee through the tremendous surf which was pounding the shore of San Clemente Island last week. The blue jackets did their duty. The scientists were landed in safety.

The long boat is not a good surf boat, and Lieutenant West displayed excellent seamanship in landing without mishap. The effort to return to the ship resulted disastrously. Running the boat seaward on a receding wave the hardy seamen were repeatedly repulsed by incoming seas. The huge breakers rolled boat and men over and over like peas in a pot of boiling water, spoiling the good clothes of the landsmen and severely trying the genial temper of Lieut. West. After working hard for several hours the boat was launched and the party returned to the Wolcott, a mile off shore.

Next day the effort was made to land the scientists and their camp outfit. It was exciting work. Invariably the boats were upset. The breakers seemed to delight in their frolic with the white men. It is wonderful that there were no serious casualties. Dr. Mearns was thrown into the boiling sea. He clung to a chest of material needed in his scientific work as a miser clings to gold. The waves enjoyed having a scientific landsman to play with. One moment Dr. Mearns was on top of his chest and the next instant the chest was on top of the doctor. Chest and man finally reached shore. After the boats, coats, hats, oars, boxes and other flotsam and jetsam had been collected from the beach, the scientists settled down to the serious work of the expedition, and for several days collected specimens of birds, mammals and plants which will go to enrich the collections of the Smithsonian Institution at Washington.

Both Dr. Mearns and Prof. Brandegee were gratified in securing specimens both of mammals and plants which are entirely new to scientists. Among other curious specimens is that of a miniature fox. It is a full-grown animal, with a tail something like that of a beaver. This San Clemente Reynard is but little larger than a big rat. It reminds one of the animal records of prehistoric times, when fully developed horses roamed the western plains which were no larger than a wolf.

Dr. Mearns shot a leopard seal. As the animal was sinking, the doctor grasped it with the tenacity of an enthusiastic collector. Then the waves grasped the doctor and his victim and toyed with them. The doctor clung to his prize. At one time he plowed shoreward on the crest of an incoming wave, actually astride the corpse of the seal, only to be thrown high on the sand, while the deceptive undertow carried the seal out to sea.

Professor Brandegee secured, among other things, a specimen related to the wild cucumber family which resembles a huge turnip. It made a load for two men and was big enough to almost swamp a small boat.

Before returning to this port last Wednesday morning, the party visited Catalina, where a San Diegan captured a 453-pound jewfish and an angler from the East did some fancy work in landing a 65-pound shark with a five-ounce rod. He beat the rod and reel record for thus landing big fish by 10 pounds. The landsmen of the party are positive that waves through which they landed on the shores of San Clemente were fully 20 feet high.”