Difference between revisions of "MILLER, Glenn" 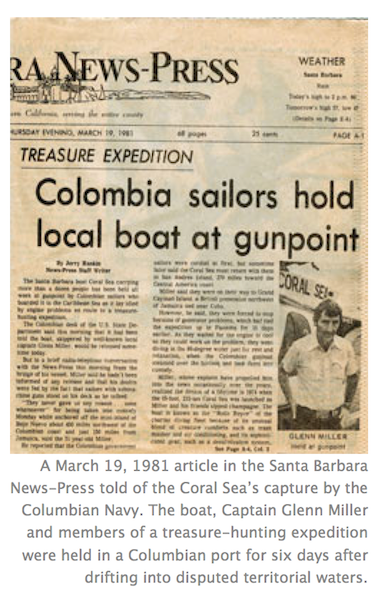 MILLER, Glenn (1929-1982), colorful Santa Barbara character, entrepreneur, diver, treasure-hunter and explorer. In 1960 Miller successfully organized the raising of the anchor from the Aggi Norge at Talcott Shoal, Santa Rosa Island which he then donated to the Santa Barbara Historical Museum.

In 1974 Miller launched Coral Sea, his 85-foot steel world-cruising exploration vessel with a helicopter pad (and now owned by Humboldt State University). For several years Coral Sea was the most prominent boat in Santa Barbara Harbor. Miller's Springer Spaniel, Mac, who loved to swim, became known as the world's first diving-dog. Miller had custom goggles made for Mac.

Miller and his wife, Jean Wright, had two children:

Glenn Miller was killed in Arizona on April 17, 1982 when his helicopter hit a power cable strung across a canyon. He was filming the movie, Deadly Encounter, at the time.

1967 [Pacific Underwater News]: “Mystery of the Missing Anchor & A Favorite Letter. Remember our guide to the wreck of the Aggie on Santa Rosa Island's Talcott Shoals that we published in March, 1967, and remember the giant anchor mentioned in the article? We even ran a picture of our Wreck Editor, Glenn Miller posed with his goodie bag beside it. Well, in the last three weeks we have had half a dozen calls from mystified divers who have visited the wreck and can't find the anchor. The really mystified ones are those who have seen the anchor on previous dives, but on visiting the Aggie in the last few weeks have found the anchor gone.I gave Glenn Miller a call, and just as I had suspected, the incurable "wreck picker" had taken a group of diving instructors and salvaged it. It now rests at the Santa Barbara Historical Society to whom they donated it. A few of the divers included Dr. Glenn Egstrom, Steve Mitakes, and Jed Gardner of UCLA. Also aboard were Tommie Thompson of the U/S. Divers Company, Otto Gasser of Cal in Poly Pomona, Calif., Jim Joiner of the Underwater Technology Institute in North Hollywood and well-known underwater photographer Dick Anderson. This was one of the largest if not the largest anchors ever salvaged on the Pacific Coast. The divers used two 5-foot diameter steel mooring buoys. These buoys already have one hole, into which they could feed air, but they drilled another so that the air might more rapidly escape when sinking them. They sank these along side the anchor. After lashing the buoys to the anchor they plugged the top holes in the buoys and fed air into the bottom hole using a set of twin 72's [scuba tanks]. Once on the surface it too the Emerald eight hours to tow the big anchor back to Santa Barbara.”

February 1968 [Pacific Underwater News]: “Against Wreck Picking. I was sorry to read in your "Blow an' Go" column last issue that Glenn Miller and a group of "instructors" had removed the big anchor from the wreck of the Aggie at San Miguel Island [Rosa]. Does Captain Miller really believe that the land lubbers visiting the Santa Barbara Historical Society will appreciate the big anchor as much as skin divers did visiting it in 40 feet of water? As far as I'm concerned (and I believe there are other divers like me) there has just been one more bit of interesting underwater environment and wreck lore that will no longer be enjoyed by Pacific Coast divers. Frankly, we believe that the wrecks should be left as they are for all to enjoy. We agree with you, Hank [Holcomb], when you referred to Captain Glenn Miller as an "incurable wreck picker," only we probably don't mean it as an affectionate term as you probably did. Because we think the "Wreck Pickers" should stay out of the water. You won't print this letter because Glenn Miller writes a column for Underwater News, but at lweast I got it off my chest. Ted Beckman, San Francisco”

May 1968 [Pacific Underwater News]: “About that anchor from the Aggie. I read with much interest Mr. Ted Beckman's letter in your last Letters to the Editor Department. (March '68) about his being unhappy that a group of divers and myself salvaged the anchor of the Bark Aggie and gave it to the Santa Barbara Historical Society. I believe that the historical wrecks like the Winfield Scott for instance should be dove on and admired without desecrating them so that other divers in the future may enjoy diving into into a little bit of history. You'd be amazed at the number of divers that I have to tell not to break up the paddlewheels of the Scott. But the anchor of the Aggie — that my friend, is a different story. In the first place it was 35 miles from the mainland, and a mile and a half at sea from the nearest island. In the second place, it was I who originally found the wreck of the Aggie completely by accident. I might also add, most of the divers who have been up there diving on it have gone with me, and then sometimes they don't get to dive on it because a lot of the time even I can't get on the wreck for various and sundry reasons, i.e. fog securing my landmarks, wind making the sea too rough, a big ground swell which will crest and break right over the wreck. Third, it's amazing no matter how well you explain to a bunch of divers about where the anchor was located how many of them will miss it. Fourth, this ship had two anchors. I only salvaged one. I left the other one there to be enjoyed by the fish and the very few divers that might ever see it. Fifth, there was another person who found out where it was and was going to get it and sell it to a restaurant out of town. At least I didn't make a buck on it, in fact it cost me a hell of a lot in time, fuel, etc. The Emerald doesn't run on love alone; it burns diesel fuel & at the going rate of twelve gallons an hour. Sixth, I believe in a majority rules society, and I know that in one day 500 times the amount of what you called "landlubbers" enjoyed seeing that anchor than all the divers will in the next 50 years. To sum up this lengthly epistle, I'm not mad at Mr. Beckman for being misinformed, but I do not think he is getting all nervous and upset over something that he doesn't know any thing about. I'd hate to see him get ulcers over an anchor. Glenn Miller, Skipper, Motor Boat Emerald”

April 19, 1992 [SBNP]: “Local pilot, Glenn Miller, killed in helicopter crash. Searchers have recovered the body of Glenn Miller, the colorful and adventuresome Santa Barbaran who died along with two other members of a film crew when the helicopter he was piloting struck a cable and crashed into the Colorado River. The bodies were recovered yesterday near Lees Ferry, Ariz., where the chopper crashed near sundown Saturday, the Coconino County Sheriff's office said. A fourth crew member, Lori Lee Gere, of Tarzana, was hospitalized in Page, Ariz., after the crash with only minor injuries. According to Billy Graham, director of the EMI Production American Angels, Ms. Gere was thrown clear of the helicopter on impact and managed to swim away from the wreckage until she was pulled from the water. Ms. Gere has no recollection of the accident, said Graham, who talked to her in the hospital yesterday. He said that she recalled "only that they were flying and then she was in the water.' The others killed in the crash were identified as Diane Dougherty, 27, of Tucson, and Frank Novak, 49, of Los Angeles. All four aboard the helicopter were employed by EMI productions, Inc., of Los Angeles. Miller, 52, was a veteran pilot with a penchant for adventure, whose exploits brought him into the news on more than one occasion. The most recent was in March, 1981, when his 85-foot boat Coral Sea was seized by armed Colombian sailors while it was on a treasure-hunting expedition in the Caribbean. He and his crew were released after a week, along with their vessel, and the incident captured nationwide publicity. Miller, who built the Coral Sea in a Milpas Street boatyard, launched the vessel in 1974, continuing the diving charter business he had started in the early 60s. Miller was flying his Hughes helicopter about 30 feet above the river when he struck a cable stretched between the river banks at Lees Ferry, a launching site for river-rafting trips through the Grand Canyon. Graham said that Miller's craft and two other helicopters were returning to a local airport shortly before 7 p.m. after a day's shooting up the canyon. While the other two pilots were aware of the cable hazard, Miller, who had never flown the canyon before, was unaware of of it, Graham said. The cable, a leftover from old mining days, is presently used to lower depth measuring devices into the river, said Graham. In the collision the cable smashed the bubble nose of Miller's helicopter, causing the helicopter to somersault on its back, he said. The helicopter reportedly skipped over the water for about 300 yards, and according to sheriff's deputy Linda Kuczynski, the wreckage was submerged in 19 feet of water within 30 to 60 seconds. Graham, who was flying in one of the two other helicopters, said that they had landed and were waiting for Miller's arrival when police cars arrived to advise them of the accident. Dale Whitmore, a fishing guide from nearby Marble Canyon, and Rudy Forner, an employee of Garret Turbine Engine Co. in Phoenix, were credited with rescuing the lone survivor. Whitmore pulled her out by her hair after he and Forner launched a small boat from a nearby dock, said Jim Stubbs, publisher of the weekly Lake Powell Chronicle. The bodies of Miller and Ms. Doherty were recovered from the helicopter's fuselage by National Park Service divers yesterday morning, deputy Kuczynski said. Novak's body was recovered 500 yards downriver, she added. Dark swift current and temperatures of 42 degrees hampered recovery efforts Saturday, but the current was eased when the Federal Bureau of Reclamation reduced water releases from dams upriver, she said. Graham, who directed the film's predecessor, Birds of Prey, said that American Eagle involved helicopter stunts, but that Miller was not involved in them. Miller had a speaking role in the film as a truck driver, using his own truck and trailer rig in his scenes... Miller will be cremated in Arizona with his ashes flown back to Santa Barbara to be scattered over the Channel Islands. He was born Oct. 9, 1929 in Santa Barbara, and attended Laguna Blanca and Santa Barbara high schools. According to Miller's survivors — son Zachary, and daughter Kathy — no services will be held according to his wishes.”