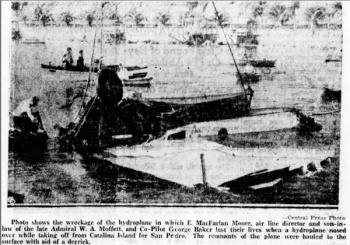 November 3, 1933 [LAT]: “Two men, one of them a son-in-law of the late Rear Admiral Moffett, lost their lives and a third suffered serious injuries yesterday when the transport hydro-plane in which they were attempting to take off from Avalon, Catalina Island, nosed over and crashed in the waters near the island. The dead were identified as Elliott McFarlan Moore, 31 years of age, of Avalon, the late rear admiral's son-in-law and vice president and general manager of the Catalina Wilmington Air lines, operators of the plane which crashed, and George Baker, 28, of Long Beach, co-pilot of the ship, and formerly a navy flyer. Walter Siler of Avalon, pilot of the large ten-passenger amphibian, was seriously hurt. He suffered a broken leg and other injuries and was taken to the Avalon Hospital. There were no passengers on the plane at the time of the crash. The accident marked the second time within six months that death has struck from the air above the sea at the family of the late Rear Admiral, he himself having died in the crash of the huge dirigible Akron off the Atlantic Coast last April. The plane which crashed was a Douglass amphibian which had been in service of the Catalina-Wilmington line with a similar transport ship since the air line was established, May 30, 1931. It was making its regular morning passenger run to the mainland when the crash occurred, its scheduled calling for a take-off at 7:45 a.m. Spectators on the island's shoreline said the huge craft had taxied about half a mile, heading toward the mainland, without managing to rise in the air. They said it suddenly nosed over when half a mile out. A speedboat immediately set out to the scene, where the amphibian was floating, badly cracked up. The bodies of Moore and Baker, both of whom had died instantly of head injuries, were taken from the plane's cabin. Siler, thrown clear of the ship, was taken from the water near by. Moore leaves a widow and three small children, while Baker leaves his widow and one child. Moore's brother-in-law, Lieut. George Moffett, son of the late rear admiral, a naval officer stationed at San Diego, was notified of the accident and reached Avalon by plane a short time later. The two twin-motored amphibian planes in the line's service had established a record for passengers carried since they were placed in operation, officials of the company said after the crash, and had en enviable safety record. They had carried 36,847 passengers since May 1931 and had flown a total of 125,000 miles on their runs. The accident was the first to occur with injury to an occupant of the planes since the line was established. Prior to the establishment of the Catalina-Wilmington Airlines Western Air Express had operated planes between the island and mainland, also without an accident occurring...”