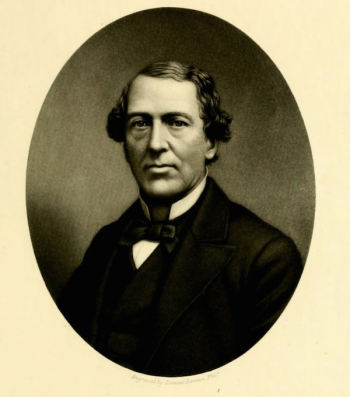 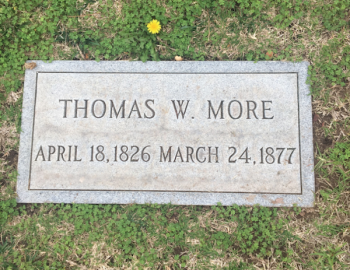 Thomas Wallace More, along with brothers Alexander P. and Henry H. comprised the ranching and cattle firm of More Brothers. As early as 1858, T. Wallace purchased an interest in Santa Rosa Island. T. Wallace later exchanged his island interest with his brother Alexander P. for his interest in Rancho Sespe in Ventura County. On March 24, 1877 T. Wallace More was murdered at Rancho Sespe in a highly publicized event. Several squatters on Rancho Sespe were arrested, including J. S. Churchill, M. Cook, John Curlee, Jesse M. Jones, Ivory D. Lord, Charles McCart, F. A. Sprague and J. A. Swanson. Jesse Jones turned State’s evidence, and as a result Cook and Swanson were exonerated, William H. Hunt was also arrested, and it was learned that F. A. Sprague intentionally fired the fatal shot that killed More. Sprague, tried and found guilty of being the leader of the planned assassination of T. W. More, was sentenced to death by hanging on Friday, September 27, 1878. Thomas Wallace More is buried in the More family plot of the Santa Barbara Cemetery

August, 1859 [?]: “At the General Election to be held on Wednesday, 7th of September next, the following District, County and Township officers will be elected... Precinct of the Islands. At the Island of Santa Rosa, Camp of Thomas W. More. Inspector, Thomas W. More; Judges, Clemente Espinosa and Francisco Lugo... Charles E. Cook, Clerk.”

February 18, 1871 [SBWP]: “On Thursday last a schooner belonging to T. W. More went ashore at Carpinteria. She had discharged her cargo of lumber, and on shipping her cable, a heavy sea coming in at the time, she was driven ashore and lies high and dry. She will probably prove a total loss, amounting to $7000 or $8000.”

February 18, 1871 [SBT]: “Ashore — We have just learned that the schooner Falmouth, owned by Mr. More, went ashore at Carpinteria on Thursday evening, during a heavy blow from the southeast. The schooner Active, Captain Mills, left port yesterday morning to render what assistance possible to the beached vessel.”

February 25, 1871 [SBT]: “Afloat — We are glad to be able to announce the fact that the schooner Falmouth, owned by Mr. More of this place, was saved from being wrecked at Carpinteria, mention of which was made in our last. On Sunday morning last, at high tide, by the continued exertions of the schooner Active, Captain Mills, and others, the Falmouth was floated into deep water. The damage done was slight, breaking a portion of the rudder and the false bottom of the schooner.”

March 23, 1872 [SBT]: “District Court. Honorable Pablo De La Guerra, Judge. March 19, 1872. In the case of T. W. More vs. the San Francisco Bulletin Co., being a libel suit for $100,000 damages. Messrs. Fernald, Richards, Huse and Campbell appeared as the attorneys for plaintiff; and Messrs. Barnes and J. Franklin Williams appeared for defendant… The case was submitted to the jury as we go to press.”

January 2, 1875 [SBDP]: “Sheep. Mr. T. W. More left his ranch at La Patera last Wednesday with 9000 head of young ewes, bound for San Francisco, overland. The sheep are of good breed and he expects to realize five dollars apiece for them.”

March 24, 1877 [SBDP]: “A horrible crime — bloody ending of a long-standing feud. This community was shocked to its center this morning by the dread intelligence telegraphed from San Buenaventura that a murder most fowl—an assassination—had been committed on the person of one of our citizens, Thomas Wallace More, on his Sespe Rancho, in the Santa Clara Valley, Ventura County, last night. When later in the day it was learned through other dispatches that the murder was committed not by a single enemy, but by a band of conspirators, the public horror of the dark deed was intensified… the murder was done in the nighttime, by masked assassins, accompanied by incendiaries… It is notorious in all this southern country that Mr. More has been bitterly at variance with squatters or settlers on the original Sespe grant which he bought many years ago [1854], and the boundaries of which have long been in hot dispute… T. Wallace More, the murdered man, leaves a family consisting of a wife and four children, one of whom is the wife of C. A. Storke…”

March 25, 1877 [SBDP]: “A telegram was received here this morning from San Buenaventura for Mr. H. H. More, brother of the murdered man, informing him of the deed. Mr. H. H. More is now at Santa Rosa Island, but there is no vessel in the harbor to take the message to him.”

March 26, 1877 [SBDP]: “Yesterday about noon the body of the murdered man, T. Wallace More, was brought into town from Ventura… We are informed by parties from the scene of the murder — the Sespe — that, as was to be anticipated, strong suspicions rest upon some of the squatters… After the murder had been committed, Mr. Lawrence More, who was at the sheep camp about two and a half miles from the ranch house, was summoned, and after searching for some time, discovered the body of his brother…”

May 25, 1883 [SBDP]: “One of the schooners now in port will go over to the islands and take on a cargo of wool there waiting shipment. There is about seven hundred bales ready for market on the More estate.”

November 24, 1884 [SBDP]: “A runaway occurred on the wharf and State Street last Saturday afternoon fortunately resulting in no damage. Mr. Thomas More was on the wharf with a team of spirited carriage horses belonging to O. M. Covarrubias at the time the steamer arrived…”

June 18, 1891 [SBMP]: “The suit of the estate of Wallace More vs. J. W. Calkins is set for trial this morning in the Superior Court of Ventura County. Several of the parties interested went down on the train yesterday afternoon.”

July 1, 1896 [SBDN]: “Mrs. Miller, administratrix of the More estate, and C. A. Storke, her attorney, are at the island of Santa Rosa for business pertaining to the estate. Mr. Thomas More is also on the island.”