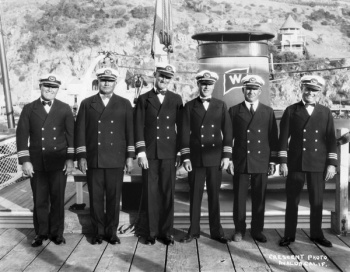 MORICICH, Lucas “Tinch” (1890-1959)[SS#552-22-7344], fourth child of Vincent and Josephine Gemilere Moricich who, like his father before him, became constable at Avalon on Santa Catalina Island. In 1918 he worked as a captain for the Meteor Boat Company. In the early 1930s Moricich ran the glass-bottom boat, Princess. Tinch Moricich became a coach and escort pilot with the Catalina Channel swimmers. He accompanied swimmers, Greta Andersen on her 26-hour double crossing, and Amy Hiland on her 20 hour 7 minute one-way crossing. Tinch died at age 68 on January 19, 1959.

January 30, 1917 [TI/Avalon]: “A birthday surprise party was given to Mr. L. Moricich Sunday evening at his home on Beacon Street.”

January 1, 1918 [TI/Avalon]: “The glass-bottomed power boat Empress, Captain T. Moricich, is expected from Catalina Harbor today. Owing to the increasing volume of business it has been found necessary to bring the boat back from its winter mooring in that land-locked harbor.”

Janaury 21, 1925 [TI/Avalon]: “Tinch Moricich is putting in a retaining wall in front of his vacant Beacon Street lot, which adjoins the one upon which his home is located. He has also laid some neat walks composed of smooth round stones from Pebbly Beach. Herbet R. Baker is doing the cement work.”

December 20, 1926 [LAT/SCat]: “Avalon… A grim tragedy of sea in which one man died of starvation and another gave up hope of rescue and life after reaching the beach on Catalina Island was related last night in the island branch of the Golden State Hospital by Ely B. Kelly, 69 years of age, a Redondo fisherman, who had been adrift on the sea since the 8th inst., in an open boat. James McKinley, 63, also a fisherman and companion of Kelly, was found dead in the bottom of the Grey Boat, their fishing yawl, drifting off the west end of Catalina Island. Captain George Michaelis, skipper of the boat Leona, recovered the craft and the body, which were removed to Avalon. Kelly, suffering from hunger and exposure, told the thrilling tale of the sea to Constable Moricich at the hospital…”

December 21, 1926 [LAT/SCat]: “Avalon… The surviving member of the fishing party, who managed with threadbare sails to guide this boat to Catalina Island Sunday morning, has been a patient in the hospital at Avalon. As he slowly recovered his strength yesterday, he told details of the terrible voyage to Constable Moricich — a story that made its hearers shrink from its very gruesomeness…”

December 29, 1926 [LAT/SCat]: “Avalon… others who testified at the inquest included George Michaelis, fisherman, and Constable L. Moricich, who told of finding [Eli P.] Kelly lying on the Catalina Island beach beside a half-eaten piece of cactus plant. County Autopsy Surgeon Webb testified his examination showed that McKinley had died of exposure, starvation and pneumonia.”

August 7, 1930 [LAT/SCat]: “Avalon. Not long after being seen in the company of a man on the recreation pier at Avalon, Catalina Island, a woman about 60 years of age was found dead in the water there yesterday in circumstances indicating she may have been the victim of violence. One eye was badly discolored when the body was found, according to the report made by Conastable Moricich to the coroner…”

December 25, 1948 [LAT/SCat]: “Avalon. Two youthful San Pedro beachcombers who got tired of a diet of fish and put forth in a dory four days ago to try their luck on Santa Catalina Island were rescued, much the worse for wear, near the island yesterday… The youths were found becalmed and exhausted from hunger and exposure, a short distance from Avalon by Oscar Griffith, who towed their tiny craft to shore and turned them over to Constable Tinch Moracich…”

October 3, 1954 [LAT]: “Little did they realize — the handful of Catalina Island glass-bottom boat and coin divers of 50 years ago — that they had originated a sport which one day would have thousands of participants prowling the waters off the Southern California coast from Palos Verdes to Laguna Beach — and off Catalina itself… A number of Duke’s coin and glass-bottom boat diving contemporaries still reside on the island. One is his brother, Frank, with whom he operates the glass-bottom boat Coral Queen. The others are Tinch Moricich, Oscar Griffith, Everett and Pete Adargo and Hernandez brothers, Sam, Marce, Andy and Manuel. However, none has dived for years. At least since the last of the glass-bottom boat diving exhibitions in the summer of 1941, prior to the outbreak of World War II...”

January 22, 1959 [LAT/SCat]: “Avalon. Funeral services will be conducted at 1 P.M. Friday in Hollywood Cemetery Chapel for Lucas (Tinch) Moricich, 68, hero of a dramatic sea rescue off Santa Catalina Island 23 years ago, who died in his home here. Mr. Moricich, constable of the island, was on patrol the night of November 8, 1936, when he heard cries from a 50-foot sloop that had was being driven inshore by a storm off Casino Point. Launching a dory in heavy seas, Mr. Moricich, single-handed, brought seven persons safely ashore. For his heroism, he later was decorated with the Old Glory Medal by the Syrian-American Council of the United States Flag Association. A native of San Pedro, Mr. Moricich leaves his widow Margaret.”

April 18, 1971 [LAT]: “…Receiving the least publicity for the most work was Greta Anderson, Olympic Gold Medal winner who was then living in Long Beach. She swam the channel round-trip (48 miles) in 26 hours 53 minutes and 28 seconds in October 1958, breaking both the men’s and women’s records. Two press photographers, a Long Beach councilman and Captain Tinch Moricich of Avalon were her only greeters on the island, and the crowd was almost as sparse when she made it back to the mainland. After meager congratulations had been proffered, someone wrapped Miss Anderson in an old-fashioned woolen nightgown and she got violently seasick in the cabin cruiser that took her home to Long Beach.”