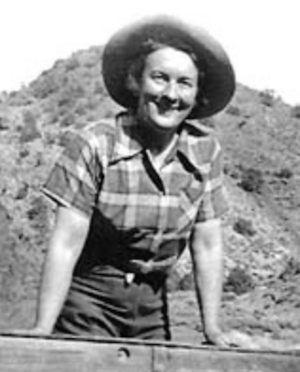 MURBARGER, Nell H. (1909-1991) [SS#560-05-3109], South Dakota-born outdoorswoman, journalist, ghost town explorer and avocational botanist who collected plants on San Clemente Island in 1936, along with a large collection of Indian relics. She is credited with being the first to collect Lithophragma maximum on the island.

From 1931-1939 she was married to Washington-born Wilbur Blake “Sarge” Murbarger (1894-1986) [SS#551-32-9459]. She worked for several western newspapers and magazines, including Los Angeles Examiner, Costa Mesa Globe Herald, and Desert Magazine, and authored several non-fiction books. Two-hundred twenty two of her San Clemente Island specimens collected between March 1 and May 1936 are located at the University of California, Berkley herbarium.

“Mrs. Nell S. Murbarger, author, Costa Mesa, California, first visited San Clemente Island with her parents in 1926, obtaining permission from E. G. Blair. Then in 1935 she returned with her husband, Wilbur B. Murbarger, an archaeologist interested in obtaining Indian artifacts on the island; her parents; and a friend, Dora Tucker, of Las Vegas. They left Costa Mesa after the Thanksgiving holiday in 1935, and returned June 2, 1936. Fortunately, during this visit, Dr. Herbert L. Mason of the University of California, sent her a plant press, and she collected extensively, visiting all parts of the island by foot. These collections (UC) were numbered 1-242; nearly all are cited here. Her interesting collection contains a number of species not otherwise known from the island. In studying them, it is important to know that Mrs. Murbarger kindly loaned me two chapters of an unpublished manuscript on San Clemente Island from which I was able to extract additional information about the plants she observed...” [Raven, Peter H. San Clemente Flora in Aliso 5:3 (289-347) Article 8, April 15, 1963

October 25, 1936 [LAT]: Costa Mesa. More than 450 relics of Indian days, an extremely valuable collection, were brought from San Clemente Island, the country’s newest naval base, by two Costa Mesa couples, who obtained the relics during an eleven-week period in which they were practically isolated from civilization. The discoveries were made by Mr. and Mrs. W. B. Murbarger and Mrs. Murbarger’s parents, Mr. and Mrs. H. C. Lounsberry, all of whom have a wide knowledge of archaeology and botany. Mrs. Murbarger also gathered 240 varieties of plants for the University of California. Also discovered were early issues of the Los Angeles Times yellowed with age. Workmen found them crammed between old partitions of a historic ranch house at Wilson Cove. Five automobile loads of equipment, including 1000 pounds of provisions were conveyed to the plant on the forty-two-foot cruiser, Elf-Fin. Tents housed members of the party. While the relic-hunters worked, wild goats and their kids scampered about. Hundreds of calves played in the nurseries of the rookeries along the shores as sea lions and hair seals barked and played. Wild domestic cats, over-running the island, hissed at them. Nests of osprey and bald eagle were discovered. The collection of plants contained many found nowhere else in the world. Many perfect mortars weighing as much as twenty-five pounds, steatite bowls, basalt knives, picks and stone hooks, abalone shell dishes, charm stones, hair ornaments and artistic stone lamps were among the specimens found.”