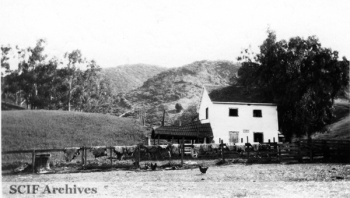 Matanza, Santa Cruz Island [Sp. slaughter house], a two story building set in the southwest portion of the Main Ranch complex. It was built under the direction of Justinian Caire in 1890. The lower story is rubble construction, and the upper story is wood. There is an outside staircase with an island-forged iron railing leading to the upper floor which originally served as a bunk house. The matanza was built among a series of corrals which extended to the trasquila to the north. With the introduction of diesel generator power to the island, the matanza was converted to a power house. In the early 1970s, an ell addition was added to the west wall.