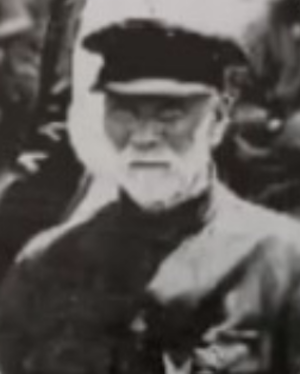 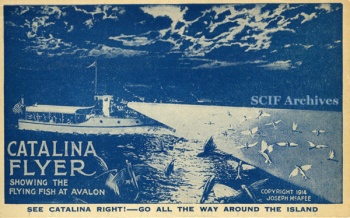 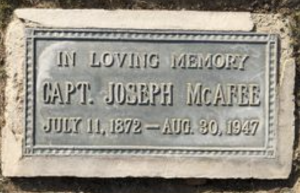 In the1930 census they lived in Long Beach. They were back in Avalon in the 1940 census.

August 17, 1915 [TI/Avalon]: “Captain J. McAfee reports that on two occasions he has seen an octopus during the past week between Avalon and Church Rock that has tentacles over thirty feet in length and would weigh over one ton.”

November 29, 1919 [San Pedro News Pilot]: “Disabled launch rescued at sea. Capt. Joseph McAfee of the launch Catalina Flyer, Carey E. Taylor, Leslie Adams and Vernon Keyes today were little worse for an exciting experience at Avalon when the launch became disabled in a heavy sea and for a time was stranded on the rocky beach. Harry Houdini, the "handcuff king," was cut and bruised when he made a vain attempt to swim with a line to the disabled launch. A motorboat manned by Harry Stoughton finally reached the disabled craft and towed it to safety.”

May 2015 [SCINews]: “Summer of the Blanche. Our wonderfully iconic Blanche W will be saying goodbye to her millions of fans at the end of this summer. Built in 1924, The Blanche as we call her, has grown old and beyond being able to repair and maintain her to the standards of the U.S. Coast Guard. The Blanche was built in 1924 on Mormon Island in Wilmington Harbor for the Santa Catalina Island Company. William Wrigley, Jr. named the boat Blanche W after his one year old granddaughter, Ada Blanche Wrigley. It was specifically built for the flying fish tour and to create a boat faster than its major competitor, the Catalina Flyer, owned by Captain Joseph McAfee who originated the flying fish tour. Throughout the summer special events will be held in honor of The Blanche. ”

2015. [LAsthepace.com]: “Catalina Boat House Hotel: In 1912 Captain Joseph McAfee sailed his flat bottom houseboat from Venice Beach to Santa Catalina Island with the intention of making Avalon his home. Captain McAfee purchased a parcel of land with a wonderful view of the bay located on what is now called Marilla Avenue. Maintaining a strong attachment to his houseboat, as well as the desire to have a home overlooking the bay, Captain McAfee devised an ingenious plan to haul his houseboat up the hillside to his newly acquired property. Captain McAfee’s houseboat was now referred to by one and all as “the Captain’s Beach House.” As the years went by, the enterprising Captain built additional rooms to take advantage of the booming island tourist trade. These rooms were attached to the original houseboat and tiered down the hillside. The houseboat hotel became known as the Driftwood Inn and was then renamed the Catalina Beach House Hotel in the early 1960s. The Catalina Beach House Hotel has been updated and remodeled into one of Catalina’s most charming and delightful places to stay. The hotel was renamed the Catalina Boat House Hotel in 2014 to honor the visionary Captain McAfee and the property’s unique history.”

February 10, 2020 [backpackerverse.com]: “Haunted Avalon: The Dead Captain of the Catalina Boat House Hotel. In 1912, a gentleman named Captain Joseph McAfee navigated his houseboat from Venice Beach to Avalon, California in the hopes of making it his new home. After he purchased a parcel of land, he faced a dilemma. He could build a house, but why bother when he had a perfectly good one on the bay? Over time, Catalina Island became a popular tourist destination. The captain capitalized on this by adding rooms to his houseboat, and staggered them down the hill toward the bay. Thus, the houseboat became an inn. It was named the Catalina Boat House Hotel during the early 1960s. Naturally, Captain McAfee wasn’t there to witness this official change…or was he? Rumor has it that the captain was so in love with his makeshift home in Avalon that after he perished on the upper deck, he decided to come back and haunt the place...”