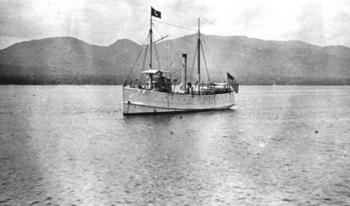 McArthur (G.V.S.P.) (1876-1915+), 115-foot wood hulled steam vessel built at Mare Island, California, for the United States Coast & Geodetic Survey under the Department of Commerce and Labor. She remained in service on the Pacific Coast until 1915, often visiting the Santa Barbara channel waters. From 1873-1876 McArthur was under the command of Captain Frank Courtis.

February 5, 1877 [SBDP]: “The United States steamer McArthur is anchored in port. She takes the place of the Hassler, and is under the command of Captain Curtis [Courtis]. She will be employed on the coast survey between here and Point Conception.”

June 26, 1877 [SBDP]: “The Coast Survey steamer McArthur left for up the channel yesterday.”

July 21, 1877 [SBDP]: “Yesterday afternoon considerable interest was exhibited by numbers of persons who visited the Odd Fellows; building to gaze upon the shell of the turtle which was captured by the crew of the McArthur. It was presented by the Captain to the Odd Fellows’ Society. The shell is unlike any turtle shell that has been seen even by an old expert who for years was engaged in catching turtles of all sorts and sizes. Along the middle of the shell runs a backbone, similar to that of a shark, and long ribs extend from it, on either side, to the edge of the shell. The ribs are embedded in a thick layer of blubber-like fat, averaging about 2 inches in thickness. The shell is covered on the outside with a rubber-like skin very similar to the skin of a porpoise. The flesh is very dark, coarse and strong, and is unpalatable, but the soup made from it is very good. The Odd Fellows’ intend to have it preserved and will add it to their already numerous library attractions.”

September 1, 1877 [SBDP]: “The McArthur is expected to arrive from Catalina Island tomorrow.”

November 16, 1877 [SBDP]: “The McArthur came into port on Saturday evening. She was not expected before next Wednesday, but owing to the boisterous weather off Point Conception, they were unable to do anything.”

December 15, 1877 [SBDP]: “The United States Coast Survey steamer McArthur from the channel, and the schooner Star of Freedom from Santa Cruz Island, are expected to arrive this afternoon.”

December 15, 1877 [SBDP]: “The McArthur’s work in the channel was nearly finished when the weather cut off operations for the present. The ship goes to San Francisco about January 1st.”

December 22, 1877 [SBDP]: “The Government survey steamer McArthur arrived in port at 10 o’clock this morning. Her work in these waters is not yet completed.”

March 26, 1878 [LAH]: “Some fun was occasioned this week in town over the wild goose chase of the revenue cutter McArthur after the harmless little schooner Rosita. The Rosita is a little $1,000 schooner, and belongs to our friend J.M. Brooks, he having purchased her of J.J. Mahoney, and is on her way from the Catalina Islands, with probably a couple of barrels of seal oil and a few sacks of abalone shells. It occurred to a self-constituted government detective here that the little schooner was on a smuggling expedition. He gave information to the officers of the steamer McArthur at Santa Barbara, that she was expected to land here with a cargo of cigars from Mexico. Immediately the McArthur put on a full head of steam and rushed madly to this port. The officer in command came ashore and hunted up his detective, who informed him that in all probability the smuggling schooner was putting off her valuable cargo on Santa Cruz Island. Again the cutter was put under headway and steered direct for Prisoners Harbor on the Island. Of course no schooner was there, and if she had been, the errand of the ill-advised McArthur// would have been bootless. Probably the officers of the McArthur will examine a little more carefully into the merits of the gossip of reckless and maliciously disposed informants hereafter. The Rosita, when she arrives in port, will be turned over to her owner, who will use her as a fishing and sailing snack between here and the Islands.”

April 20, 1878 [SBDP]: “The U.S. Coast Survey steamers McArthur and Hassler put in an appearance at Santa Monica Saturday and Sunday for supplies. The former is operating in the vicinity of Point Dume, and the latter around Catalina Island.”

June 25, 1878 [SBDP]: “The McArthur left yesterday morning and the Hassler last night, the one bound for Santa Catalina and the other for San Diego.”

November 30, 1878 [SBDP]: “The government steamer McArthur and schooner Star of Freedom were riding at anchor in the harbor today.”

March 10, 1879 [SBDP]: “The Coast Survey steamer McArthur returned from San Nicolas Island yesterday and is now lying off the city awaiting orders. It is hoped that the appropriation bills will be passed at the extra session of Congress, so that the work of the Coast Survey service may go on at once.”

March 11, 1879 [SBDP]: “Orders have been received for the Coast Survey steamer McArthur to lay up at this port. It is hoped that the deficiency and appropriation bills will be passed the extra session of Congress, and that work can shortly be resumed, in which case it is desirable to have the steamer in this neighborhood.”

April 17, 1879 [SBDP]: “The Coast Survey steamer Hassler, Coffin, Commander, is now in San Francisco undergoing repairs to her engine, etc., and as soon as they are completed will proceed to service on the Northern coast. She has recently been engaged in surveying the Santa Barbara coast, and the work will be completed by the McArthur.”

May 20, 1879 [SBDP]: “The schooner Surprise and Santa Rosa and the McArthur are in the harbor today.”

July 7, 1879 [SBDP]: “The U.S. Coast Survey steamer McArthur, which has been in the harbor for a few months, steamed up, and sailed for the islands yesterday. From the islands she goes to San Diego, and will return and continue the coast survey off Catalina Island.”

August 3, 1879 [SBDP]: “The Star of Freedom, the U.S. Coast Survey steamer McArthur, and the sloop Wam Woo are in the harbor today.”

September 22, 1879 [SBDP]: “The Coast Survey steamer McArthur is in the harbor, and will start in a few days for Santa Barbara Island to bring off the party working there.”

September 29, 1879 [SBDP]: “The McArthur will sail on Wednesday for Santa Barbara Island to bring off the surveying party which will have finished their work by that time.”

October 1, 1879 [SBDP]: “Coast Survey. Steamer McArthur leaves tomorrow for Santa Barbara Island to complete the survey there, which will occupy about ten days. She will then return here and take all those engaged in that branch of the Survey to Port Harford. From there the party will work southward as far as Point Conception. This port will be the headquarters of the ship, but she will only visit here about once a month. This is the best and most valuable place of refuge in case of stormy weather, therefore Port Harford people will be disappointed in their hopes of having the ship permanently located there.”

October 14, 1879 [SBDP]: “The work at Santa Barbara Island has been interrupted by fogs and bad weather, and the McArthur will not be back here for ten days more.”

October 28, 1879 [SBDP]: “The Coast Survey steamer McArthur arrived during the night and is at anchor in her usual berth.”

November 26, 1879 [SBDP]: “The McArthur, which arrived night before last, has just been to San Francisco for coal. She had a rough time crossing the bar there, as the sea was breaking three miles out.”

November 29, 1879 [SBDP]: “The schooners Star of Freedom, Santa Rosa and Surprise and the steamer McArthur are at anchor in the harbor.”

December 3, 1879 [SBDP]: “The McArthur did not leave this morning, as the weather is not propitious for prosecuting work.”

June 28, 1880 [SBDP]: “The Coast Survey steamer McArthur, which arrived here on Saturday, went to San Nicolas Island this morning to complete some work which will occupy some days. She will return here, stay a couple of weeks, and then work her way easily up the coast. The McArthur is now under command of Lieutenant E. H. C. Leutze, U.S.N...”

May 16, 1896 [SFCall]: “Santa Barbara, May 15. The McArthur and the Gedney are still lying in the harbor, the latter expecting to receive instructions which will cause it to weigh anchor tonight or early in the morning. The Gedney is taking on supplies preparatory to running over to San Miguel Island to make a survey of Cuyler’s Harbor.”

May 21, 1896 [SBDN]: “The Coast Survey vessels Gedney and McArthur returned this morning from San Miguel Island where they had gone to survey Cuyler’s Harbor. Captain Waters and Sam Gaty returned on the Gedney.”